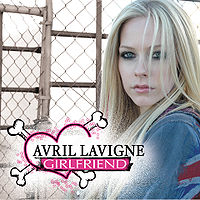 "Girlfriend" a song by Canadian singer , is the from her third album, "" (2007). It was produced by Lukasz Gottwald. "Girlfriend" became Lavigne's biggest hit in the , where it reached number one on the U.S. "Billboard" Hot 100. It topped the chart in for 6 weeks, and reached number two in the . A remix featuring rapper was released in June 2007.

The song involves Lavigne proclaiming a crush on a boy currently with his and features the typical 80's pop-punk influence and power pop of her earlier songs. Lavigne said on the side of the deluxe edition of "The Best Damn Thing" that in the bridge when the listener hears hand clapping, the accompanying giggling was created by Lavigne and Gottwald, despite it sounding like a girl.The Japanese version of this song replaces the word "motherfucking" with the phrase "one and only" in the line "Hell yeah, I'm the motherfucking Princess"."Girlfriend" is in the "" in English, Japanese, Spanish, and Chinese. [ [http://music.ign.com/articles/767/767192p1.html "Burnout Dominator Soundtrack Explodes"] , , .] It also appears in "" but this time only in English. This song is recorded in 7 languages other than English. [ [http://criteriongames.com/burnout/paradise/press/pr/index_071218.php "EA ANNOUNCES THE ADRENALINE INFUSING SOUNDTRACK FOR BURNOUT PARADISE"] , , ] It is the theme song of Japanese talk show "" - on which Lavigne appeared on , - as well as being the insert song for popular Japanese manga based drama . It is featured in the theatrical trailer for the 2007 live-action "Bratz" film, and in a trailer for the film "", and also for "". Lavigne performed the song on "" on . [ [http://www.nbc.com/The_Tonight_Show_with_Jay_Leno/Toyota_Concert_Series/bands/Avril_Lavigne.shtml Tonight Show with Jay Leno on NBC: Late Night TV Headlines and Videos - NBC Official Site ] ]

Seven additional versions of the song are available to enhance its worldwide marketability with the chorus sung in French, German, Italian, Japanese, Mandarin, Portuguese and Spanish language. The other parts of the song are in English.

There is also an edited version for radio, because of explicit lyrics. There are two official censored versions: one blanking the word "motherfucking" in the line "I'm the motherfucking princess" and the other replacing it with "I'm the one and only princess". It is played on Canadian and Malaysian radio stations, and on Z100 in New York City. However, on other radio stations the entire word is cut out or just the word "mother", as in the version on the clean edition of the album, is said.

The official remix was leaked onto the Internet in May 2007 and features rap verses from American hip-hop musician Lil Mama. Lavigne sings the chorus and bridge and Lil Mama's rap verses are substituted for the original verses. There is a boyfriend version of the song that is getting high rotation on Irish radio stations sung by Samuel Hamiliton. It was 2fm's song of the week during the first week of March, 2008 with a chorus of, "Hey hey, you you, I want to be your boyfriend...".

1 A code included on the CD to download the ringtone online.

The world premiere of the music video was announced to be on 's "" and 's "" on . However, it premiered in on Music Station C4 on . It was in heavy rotation on European music TV channel VIVA Polska on as well.

The was directed by and filmed at [http://www.golfnstuff.com/ Golf 'n' Stuff] in . It features two girls: one with an innocent persona, glasses and red hair (Lavigne), and one with an evil persona and black hair (also Lavigne) The black-haired rocker fights over the man with the red-haired girl and tries to outdo her repeatedly. She finally hits the girl in the head with a golf ball, causing her to fall into water at the golf course, and then finally wins the youth's affections. Lavigne then takes her boyfriend into a bathroom stall and slightly opens the door after a moment and gives a . Lavigne's boyfriend in the video is played by American model and dresses similarly to the "rocker" Lavigne in the video. The video features Lavigne's previous guitarist , and Lavigne's brother Matt on bass. and Lavigne shot a video for the remix of "Girlfriend".

The first 15 seconds of the video include an audio sampling of "Arcade Ambiance 1983".

On July 18th, "Girlfriend" became the most viewed video of all time on [cite web|title= Count|url=http://blog.wired.com/music/2008/07/avril-lavigne-a.html|work=Wired.com|accessdate=2008-07-20] and in August, surpassed 100 million views, the first YouTube video to reach that milestone, overtaking "" by .

Avril fans on the Avril Bandaids stated that they helped cheat the video to the top but later retracted this as a publicity stunt. This scandal helped drive further exposure of the video helping it to break records. It is expected that Avril's YouTube video views have earned in excess of $2 million (U.S). [cite web|title= Avril Lavigne Breaks YouTube Record|url=http://www.webtvwire.com/how-avril-lavigne-killed-youtube-girlfriend-music-video-is-first-to-top-100-million-views/|work=WebTVWire.com|accessdate=2008-09-10]

Reviewers have noted that the chorus bears a resemblance to ' 1979 single "I Wanna Be Your Boyfriend", in which they sing "Hey hey, you you, I wanna be your boyfriend" similar to "Hey hey, you you, I could be your girlfriend" in "Girlfriend". [ [http://www.billboard.com/bbcom/chart_beat/chat_display.jsp?vnu_content_id=1003608297 Billboard Chart Beat Chat - Letter from Mark Sieber] ] The song can be heard on the Rubinoos' page. [ [http://www.myspace.com/rubinoos Rubinoos' MySpace page] ]

On , , Lavigne, her songwriter Lukasz Gottwald, her record label, and were sued by James Gangwer and , songwriters for The Rubinoos, over claims that "Girlfriend" infringes their copyright on their 1979 song "I Wanna Be Your Boyfriend". [Apple Insider, [http://www.appleinsider.com/articles/07/07/03/apple_sued_for_duping_apple_tv_image_hosting_itunes_track.html] ] Lavigne's manager, Terry McBride, denied that "Girlfriend" was copied from "I Wanna Be Your Boyfriend", and pointed out that "Boyfriend" itself is similar to ' "". McBride said he hired a musicologist to compare the songs; according to McBride the musicologist reported that the songs were totally dissimilar, even a different meter. Prominent music critics such as of "" have publicly noted that the song is a "total lift from the Rubinoos' song". [Stephen Thomas Erlewine, "Billboard Magazine"] McBride said that Lavigne has no current plans to settle the case, but will consider the costs of defending the case against those of settling. [ [http://www.canada.com/topics/entertainment/story.html?id=4dd3568b-0723-492e-b0c7-05cb997c697a Lavigne faces U.S. lawsuit ] ] In January 2008, the lawsuit was settled and Gangwer and Dunbar released a statement saying that the similarities between the songs were based on "certain common and widely used lyrics" and that they "completely exonerate Avril and Luke from any wrongdoing of any kind in connection with the claims made by us in our lawsuit." [ [http://www.okmagazine.com/news/view/3833 "Avril Cleared of Plagiarism Charges"] , "OK! Magazine", January 15, 2008.]

Critics have compared the middle section of the song with the bridge from 's "Mickey". [ [http://community.tvguide.com/blog-entry/TVGuide-Editors-Blog/Beautiful-Fraud/Hey-Avril-Rubinoos/800013344 Hey Avril, the Rubinoos Called. They Want Their Song Back - A Beautiful Fraud | TVGuide.com ] ]

Uses in other media

"Girlfriend" was premiered on radio station The Bounce 91.7 before the official date it was supposed to be aired; the two DJs who played it were taken off the air shortly after. The single appeared and was available for download on the U.S. on , but was subsequently removed the following day. It was made available again on .

Because of sales in excess of 122,000, the song debuted at number five on the U.S. "Billboard" Hot 100 chart, the highest debut of her career. [Jonathan Cohen, [http://www.billboard.com/bbcom/news/article_display.jsp?vnu_content_id=1003555645 "Mims Remains 'Hot' At No. 1, Akon Stays Close"] , Billboard.com, .] Afterwards it became Lavigne's first song to reach number one on the Hot 100, in the issue dated , ; her previous highest peak on the chart was with 2002's "", which reached number two.

"Girlfriend" debuted on the n ARIA Singles Chart at number three. The following week it reached number-one, and it remained at the top for six non-consecutive weeks, equalling Lavigne's previous number-one single on the ARIA Charts, "Complicated". After three weeks on the charts, it was certified gold by ARIA, then platinum after seven weeks for sales in excess of 70,000 copies. [ [http://www.ariacharts.com.au/pages/charts_display.asp?chart=1U50 Top 50 Singles Chart - Australian Record Industry Association ] ] It was then certified double platinum, sales in excess of 140,000. In 2008, it was certified quadruple platinum for sales of 280,000. [http://www.aria.com.au/pages/httpwww.aria.com.aupageshttpwww.aria.com.aupagesARIACharts-Accreditations-2008Singles.htm]

On the , "Girlfriend" peaked at number two, surpassing "Complicated" as Lavigne's highest peaking single on the chart. The song ended 2007 as the years 20th biggest-selling single in the UK. [. [http://www.bbc.co.uk/radio1/chart/singles2007.shtml "Top 40 Singles of the Year 2007 "] . Retrieved ]

In , the single peaked at number three. [ [http://toplatino.net/ Latin Top] ] In , the song became the second top ten single in English of 2007 when it climbed to number eight; it later peaked at number two. [ [http://www.americatop100.com/english/mexico/index.htm Mexican Singles Chart] "Americatop100.com" Retrieved on 18-06-07.] It won the Award for "Canción del Año" (Song Of The Year) in "" (The Latin American MTV Awards) and was nominated for "Monster Single" in the MTV Video Music Awards 2007. [ [http://en.wikipedia.org/wiki/Los_Premios_MTV_Latinoam%C3%A9rica_2007#Song_of_the_Year] ] [ [http://en.wikipedia.org/wiki/2007_MTV_Video_Music_Awards#Monster_Single_of_the_Year] ] It won Most Addictive Track (Single Of The Year) at the