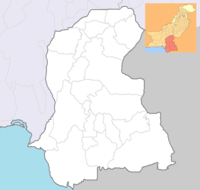 Location of Mohenjo-daro within the Pakistani province of Sindh.

Mohenjo-daro (lit. Mound of the Dead, Sindhi: موئن جو دڙو, pronounced [muˑənⁱ dʑoˑ d̪əɽoˑ]) is an archeological site situated in what is now the province of Sindh, Pakistan. Built around 2600 BC, it was one of the largest settlements of the ancient Indus Valley Civilization, and one of the world's earliest major urban settlements, existing at the same time as the civilizations of ancient Egypt, Mesopotamia, and Crete. Mohenjo-daro was abandoned in the 19th century BC, and was not rediscovered until 1922. Significant excavation has since been conducted at the site of the city, which was designated a UNESCO World Heritage Site in 1980.[1]

Mohenjo-daro was built around 2600 BC and abandoned around 1800 BC. The ruins of the city were discovered in 1922 by Rakhaldas Bandyopadhyay,[2] an officer of the Archaeological Survey of India. He was led to the mound by a Buddhist monk, who believed it to be a stupa. In the 1930s, major excavations were conducted under the leadership of John Marshall, K. N. Dikshit, Ernest Mackay, and others.[1] Further excavations were carried out in 1945 by Ahmad Hasan Dani and Mortimer Wheeler.

The last major series of excavations were conducted in 1964 and 1965 by Dr. George F. Dales. After this date, excavations were banned due to weathering damage to the exposed structures, and the only projects allowed at the site since have been salvage excavations, surface surveys and conservation projects. However, in the 1980s, German and Italian survey groups led by Dr. Michael Jansen and Dr. Maurizio Tosi used less invasive archeological techniques, such as architectural documentation, surface surveys and localized probing, to determine further clues about the Indus Valley Civilization.[1]

Mohenjo-daro is located in the Larkana District of Sindh, Pakistan,[3] on a Pleistocene ridge in the middle of the flood plain of the Indus River Valley, around 28 kilometres (17 mi) from the town of Larkana. The ridge was prominent during the time of the Indus Valley Civilization, allowing the city to stand above the surrounding plain, but the flooding of the river has since buried most of the ridge in deposited silt. The site occupies a central position between the Indus River and the Ghaggar-Hakra River. The Indus still flows to the east of the site, but the riverbed of the Ghaggar-Hakra on the western side is now dry.

Mohenjo-daro was most likely one of the largest cities of the ancient Indus Valley Civilization, which is also known as the Harappan Civilization after Harappa, another important IVC site, located to the north of Mohenjo-daro in Punjab, Pakistan.[4]

The prehistoric Indus culture blossomed over the centuries and gave rise to the Indus Valley Civilization around 3000 BC. The civilization spanned much of what is now Pakistan and North India, but suddenly went into decline around 1900 BC. Indus Civilization settlements spread as far west as the Iranian border, with an outpost in Bactria, as far south as the Arabian Sea coast of western India in Gujarat. Among the settlements were the major urban centers of Harappa and Mohenjo-daro, as well as Lothal.

At its height, Mohenjo-daro was the most developed and advanced city in South Asia, displaying remarkably sophisticated engineering and urban planning for its time.[5] 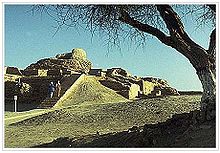 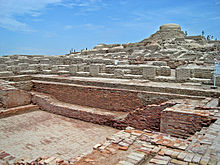 Mohenjo-daro has a planned layout based on a street grid of rectilinear buildings. Most were built of fired and mortared brick; some incorporated sun-dried mud-brick and wooden superstructures. The sheer size of the city, and its provision of public buildings and facilities, suggests a high level of social organization. At its peak of development, Mohenjo-daro could have housed around 35,000 residents.

The city had a central marketplace, with a large central well. Individual households or groups of households obtained their water from smaller wells. Waste water was channeled to covered drains that lined the major streets. Some houses, presumably those of wealthier inhabitants, include rooms that appear to have been set aside for bathing, and one building had an underground furnace (known as a hypocaust), possibly for heated bathing. Most houses had inner courtyards, with doors that opened onto side-lanes. Some buildings had two stories.

In 1950, Sir Mortimer Wheeler identified one large building in Mohenjo-daro as a "Great Granary". Certain wall-divisions in its massive wooden superstructure appeared to be grain storage-bays, complete with air-ducts to dry the grain. According to Wheeler, carts would have brought grain from the countryside and unloaded them directly into the bays. However, Jonathan Mark Kenoyer noted the complete lack of evidence for grain at the "granary", which, he argued, might therefore be better termed a "Great Hall" of uncertain function.[6]

Close to the "Great Granary" is a large and elaborate public bath, sometimes called the Great Bath. From a colonnaded courtyard, steps lead down to the brick-built pool, which was waterproofed by a lining of bitumen. The pool measures 12m long, 7m wide and 2.4m deep. It may have been used for religious purification. Other large buildings include a "Pillared Hall", thought to be an assembly hall of some kind, and the so-called "College Hall", a complex of buildings comprising 78 rooms, thought to have been a priestly residence.

Mohenjo-daro had no circuit of city walls, but was otherwise well fortified, with guard towers to the west of the main settlement, and defensive fortifications to the south. Considering these fortifications and the structure of other major Indus valley cities like Harappa, it is postulated that Mohenjo-daro was an administrative center. Both Harappa and Mohenjo-daro share relatively the same architectural layout, and were generally not heavily fortified like other Indus Valley sites. It is obvious from the identical city layouts of all Indus sites, that there was some kind of political or administrative centrality, but the extent and functioning of an administrative center remains unclear.

Mohenjo-daro was successively destroyed and rebuilt at least seven times. Each time, the new cities were built directly on top of the old ones. Flooding by the Indus is thought to have been the cause of destruction.

The city is divided into two parts, the so-called Citadel and the Lower City. Most of the Lower City is yet to be uncovered, but the Citadel is known to have public baths, a large residential structure designed to house 5,000 citizens, and two large assembly halls. 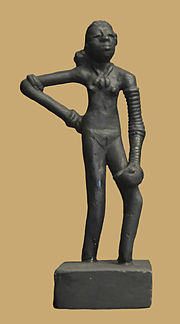 "The Dancing Girl", an artifact found in Mohenjo-daro. 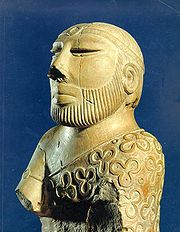 "The Priest-King", an artifact found in Mohenjo-daro.

A bronze statuette dubbed the "Dancing Girl", 10.8 cm high and some 4,500 years old, was found in Mohenjo-daro in 1926. In 1973, British archaeologist Mortimer Wheeler described the item as his favorite statuette:

"There is her little Balochi-style face with pouting lips and insolent look in the eyes. She's about fifteen years old I should think, not more, but she stands there with bangles all the way up her arm and nothing else on. A girl perfectly, for the moment, perfectly confident of herself and the world. There's nothing like her, I think, in the world."

John Marshall, another archeologist at Mohenjo-daro, described the figure as "a young girl, her hand on her hip in a half-impudent posture, and legs slightly forward as she beats time to the music with her legs and feet."[7] The archaeologist Gregory Possehl said of the statuette, "We may not be certain that she was a dancer, but she was good at what she did and she knew it".

In 1927, a seated male figure, 17.5 cm tall, was found in a building with unusually ornamental brickwork and a wall-niche. Though there is no evidence that priests or monarchs ruled the city, archeologists dubbed this dignified figure a "Priest-King"; like the Dancing Girl, it has become symbolic of the Indus valley civilization.

The bearded sculpture wears a fillet around the head, an armband, and a cloak decorated with trefoil patterns that were originally filled with red pigment.

The two ends of the fillet fall along the back, and though the hair is carefully combed towards the back of the head, no bun is present. The flat back of the head may have held a separately carved bun, as is traditional on the other seated figures, or it could have held a more elaborate horn and plumed headdress.

Two holes beneath the highly stylized ears suggest that a necklace or other head ornament was attached to the sculpture. The left shoulder is covered with a cloak decorated with trefoil, double circle and single circle designs that were originally filled with red pigment. Drill holes in the center of each circle indicate they were made with a specialized drill and then touched up with a chisel. The eyes are deeply incised and may have held inlay. The upper lip is shaved, and a short combed beard frames the face. The large crack in the face may be due to weathering, or it may be a result of the original firing of this object.

Preservation work for Mohenjo-daro was suspended in December 1996 after funding from the Pakistani government and international organizations stopped. Site conservation work resumed in April 1997, utilizing funds made available by the United Nations Educational, Scientific, and Culture Organization (UNESCO). The two-decade funding plan provided $10 million to protect the standing structures and the site from flooding. 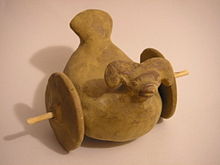 A children's toy from Mohenjo-daro.