The Chorus Paulinus or CHOPA is regarded as one of the most highly acclaimed choirs in the Philippines. It is known for its unique a cappella-style blending of voices that creates a sound reflective of its high choral standards.

Chorus Paulinus was founded on February 10, 1992 by Arnold Zamora with Frederick de Santos as assistant music director. The name Chorus Paulinus was coined from the name of the parish, St. Paul the Apostle Parish in Timog, Quezon City, where the choir originally served. Since its inception, the choir has regarded itself first and foremost, as a church choir. The goal was to simply spread the word of God through music. However, this has not stopped the choir from pursuing choral excellence. In order to achieve this, the directors, who are the only members with a formal music education, decided to screen applications via auditions to limit the membership in quality and quantity. The choir’s initial activities consisted of providing music during masses, weddings, funerals, and other special occasions upon invitation of the parishioners. Outside the church, the choir started rehearsing for and performing at Madz et al. - a yearly choral festival reserved for groups who are conducted by members or alumni of the Philippine Madrigal Singers. 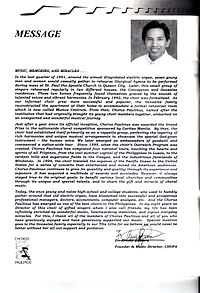 In the years that followed, the choir continued to work hard to improve their musicality. Two-hour rehearsals were held at least twice a week. Before the end of 1993, their efforts were rewarded as they won their first national title. Chorus Paulinus bagged the grand prize of the National Chorale Competition sponsored by Caritas Manila and the Department of Trade Industry (DTI). Chorus Paulinus then began making waves in the local choral scene. They were solicited to perform in non-church related activities by various individuals, private corporations and public organizations. It was around this period when the group acquired the nickname Chopa.

Chopa started holding annual fundraising concerts in 1995 to enable them to embark on several outreach programs in different regions of the Philippines. Through the support of the Cultural Center of the Philippines (CCP) and the National Commission for Culture and the Arts (Philippines) (NCCA), the choir has done much to benefit churches, communities, and charities through their outreach programs. The concerts also provided a chance to showcase the choir. The uniqueness of their repertoire is not simply based on the variety of music they perform (sacred, classical, pop, folk, foreign, madrigals). The choir prides itself with its original a cappella compositions and arrangements by its resident arrangers: Arnold Zamora, Frederick de Santos, Chito Tapnio, Jesus Carlo Merino and Dale Francisco. Chopa also has an exceptional talent in the form of Jasmin Loremas. Although not a music major, her ability to achieve perfect pitch made her the choir’s human tuning fork, allowing Chopa to start their a cappella performance in the correct tones without the aid of an instrument like a piano or traditional tuning fork. In 1998, Chopa once again proved their choral excellence as they won two awards, the Best Performance in Choice Piece and the Grand Prize, at the Awit Para sa Bayan Centennial Choral Competition.

By 1999, as Chopa continued to excel in local choral contests such as the University of the Philippines, Los Baños (UPLB) Chorale Competition, and I Concurso Coral de Ateneo, the group started venturing into two new projects: recording and international outreach. Chopa released two albums: Blessed Be God, A Cappella, a choral collection of liturgical music, and the Joy of Christmas, a released in the United States. Chopa also successfully completed three outreach programs in the USA between 1999-2001. A third album, Chorus Paulinus (SLO), featuring their live performance at the Performing Arts in San Luis Obispo, California, was released in 2001. They also worked on several projects with well known artists such as Ryan Cayabyab, Pops Fernandez, Regine Velasquez, Cocoy Laurel, and Ogie Alcasid as well as production giants ABS-CBN, GMA, and Studio 23. As the group marked its tenth anniversary in 2002, several of its members in the past decade had already retired, although they continue to value the years of training they have had with the group. Chopa was challenged with a frequently changing membership - not an easy task for the group as they constantly have to deal with different sets of singers.

With Arnold Zamora based in the USA, the task of upholding the choir’s vision depends mainly on the leadership of Fred de Santos, who is also associated with San Miguel Master Chorale or SMMC. The choir preserves their regular church commitment at the Parish of the Hearts of Jesus and Mary in West Triangle, Quezon City, as well as the Shrine of the Our Lady of Queen of Peace along Epifanio de los Santos Avenue (EDSA) corner Ortigas Avenue, Pasig City. Even though with a relatively new group of singers, they did well in their first competition, placing first runner up at the 1st Wedding Expo Philippines Choir Competition in 2003. The pursuit of excellence still continues.

In the meantime, in other countries, several Chopa alumni continue to sing in groups or as solo performers, like Fortunato Moran [1] and Myla Soliman,[2]

Arnold Zamora (born February 10, 1961) is a Filipino musician from Tagbilaran City, Bohol, Philippines who has carved for himself a name in the national music industry as a singer, composer, arranger and conductor. As a seminarian at the UST Central seminary, he founded the Psalterion Choir. At the University of the Philippines, he joined the Philippine Madrigal Singers or MADZ and is the founder of the Chorus Paulinus.[3] He is also the founder and music director of the Singing Priests of Tagbilaran.[4] 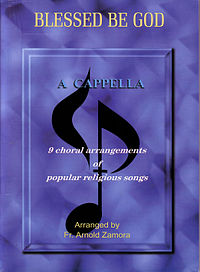 Book cover of Blessed Be God, A Cappella of the Chorus Paulinus