Year of the Dog (film)

Year of the Dog (film) 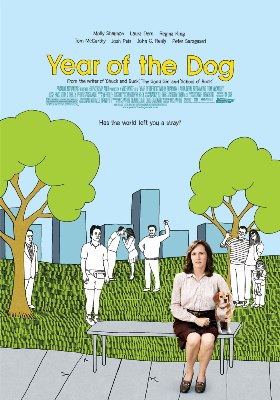 "Year of the Dog" is a 2007 film written and directed by Mike White, and starring , , , , , and . The film describes the process of a woman that goes from having one pet dog at home, to becoming a vegan and an activist.

Shannon stars as Peggy, a forty-something administrative assistant whose social and love life are slim to nil. Her most intimate bond is with her dog, Pencil. One early morning Pencil refuses to come in after being let out to do his business, and in a half-awake stupor Peggy lets him stay outside overnight. The next morning she finds him in the yard of her neighbor Al () whimpering in pain. She takes him to a vet but it is too late; Pencil dies of toxic poisoning.

The people in her life react with the slightest of sympathies, but mostly make her feel guilty for her grief. Best-friend and co-worker Layla () tells Peggy her relationship with Pencil had held her back from finding romance. Her emotionally sterile sister-in-law () and brother Pier () are too self-absorbed to really sense how deeply hurt Peggy is.

The next night Al asks Peggy on a date, and she accepts. It starts out well until Al reveals that he lost his own pet dog by accidentally shooting it in a hunting accident. Al reveals he enjoys hunting for sport, and when the two return to his home he shows off his knife collection and hunting trophies. He is oblivious to Peggy's distaste for this. She asks to see his garage, suspicious that something inside poisoned Pencil. While there Al makes a pass at her which she rejects in disgust.

Shortly thereafter Peggy gets a call from Newt (), a volunteer at the who was present when Pencil died. He tells Peggy he has a new dog he thinks she may like to adopt. The dog, Valentine, a King Shepherd with behavioral problems, comes home with Peggy. Newt agrees to try and help train Valentine, and Peggy and Newt begin to spend a lot of time together.

Through Newt, Peggy is exposed to and to a great deal of information she had not previously known about. Her deepening affection for Newt only strengthens her interest in these causes. She decides to become a Vegan herself, and begins helping Newt to adopt out various animals who are slated for euthanasia. She solicits adoptees at work, for which she is chastised repeatedly by her boss Robin (. In retaliation, she begins writing checks to various animal-related charities from his checkbook.

After one outing, Peggy and Newt share a kiss, and though Peggy is willing to take it further, Newt declines. She mistakes this for chivalry and later confesses she has fallen in love with him; Newt reveals that he is celibate and cannot be in a relationship, and implies that he is . Peggy reacts badly, shutting Newt out and instead focusing on her new relationship with Valentine. Valentine's sporadically violent behavior worsens when Newt's instruction is absent; he bites Peggy's hand badly. The dog also continually barks, causing Al to visit and complain. Peggy responds rudely, insinuating that it is her revenge because she thinks something in his garage must have poisoned Pencil.

Peggy's interest in animal rights deepens, particularly the causes to stop animal testing and of farm communities for animals who were previously meant to die to live out full lives. Her new belief system is looked at flippantly by her brother and sister-in-law; when she announces she is a vegan, he responds "It will be interesting to see how long this lasts." Alternately Layla fully accepts Peggy's new outlook, though with reservations that it will continue to hamper her social life.

On New Year's Eve weekend Peggy agrees to babysit her brother's children. She leaves Valentine in the care of Newt. She takes her young niece Lissie (, ) and nephew to a farm for rescued animals to introduce them to the "adopted" chicken (a charity sponsorship) she got them for . Intensely moved by the experience Peggy has a mini-breakdown in the car, insisting that they all go to the slaughterhouse to see the opposite side of the situation, but the children freak out so she takes them home. That night she gets drunks and discovers a rack of furs in her sister-in-law's closet. She tries them on with her niece, scattering them around the bathroom and ultimately passing out drunk. When she awakens in the morning a stack of furs she left in the bathtub have been ruined because the faucet dripped all night, filling the tub. She goes to Newt's house to pick up Valentine and finds him weeping on the floor. Valentine killed a crippled dog named Buttons, and Newt sent Valentine to be put down because he knew Peggy did not have the fortitude to do it. She rushes to the dog pound but is too late; Valentine has been dead for two hours. Peggy suffers a mental break and adopts 15 dogs slated to die; she accomplishes this by lying, saying she is Newt's assistant at the SPCA and that she intends to find them all homes. When Peggy gets to work that morning she is confronted by her boss. He has discovered all of the fraudulent checks she wrote in his name. She gets fired.

Over an unspecified amount of time (around a month) Peggy's life falls apart. She barely leaves her home, which is practically destroyed by her new pets. Al again visits to complain, saying if she does not find a way to control them he will find one for her. Then one day while Peggy is at the grocery store Newt visits and discovers what has happened. He confiscates the dogs and leaves a warning notice from the SPCA. Peggy is again devastated, but erroneously blames Al for her missing pets.

She sneaks into Al's house while he is not home and rifles through his garage. She finds a bag of pest poison on the ground with a hole chewed into the corner, confirming her suspicions about Pencil's death. Zombie-like she drags the bag through the house, leaking poison everywhere. She takes one of Al's hunting knives out of a display case and hides in wait. When Al and his new girlfriend return home, Peggy attacks Al with the knife, but he wrestles it away from her and calls the police.

We cut to Peggy being brought home by her brother where he and her sister-in-law try to find out what happened. They say Peggy's boss has decided if she pays back everything and goes to counselling he will hire her back. They ask why Peggy attacked Al, and she says she wanted him to know what it felt like to be hunted.

Some time in the future Peggy returns to work where she is greeted extremely warmly. She begins to get back into her routine when she is compelled to do an internet search that leads her to information about an upcoming animal rights protest. She sends an email to her coworkers (including Layla) boss, brother and sister-in-law and Newt. She has decided that she has to follow her soul and ultimately she has found her purpose in fighting for animal equality. She abandons her former life and heads off on a bus to the protest, content that this is her greater reason for living.