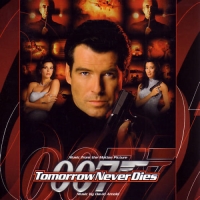 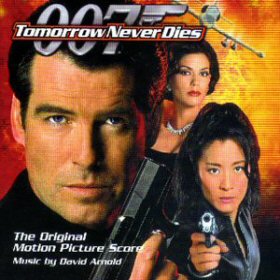 "Tomorrow Never Dies" is the soundtrack of the 18th film of the same name.

The theme tune was chosen through a competitive process. There were approximately twelve submissions; including songs from Swan Lee,
Pulp, Saint Etienne, , and David Arnold.

The score itself follows John Barry's classical style in both composition and orchestration, together with modern electronic rhythms present in most cues. In addition, themes from "Surrender" appear in various places throughout the score, mainly in the action cues, but it can also be heard in the dramatic "All in a Day's Work" track.

The DVD version of the film has an "isolated music track" allowing the viewer to watch the film with just the background music.

Scoring of the film had not been completed when the soundtrack was released so on Start date|2000|1|11 a second album was released by Chapter III Records which removed the theme songs, Moby's Bond theme remix and "Station Break", and had additional music, as well as an interview with David Arnold. [cite web|title=Tomorrow Never Dies |url=http://www.bondmusic.de/english/Disc-TomorrowNeverDies.html |accessdate=2008-02-10 |work=Bond Music]

All music was composed by , except where noted.