The International Nuclear and Radiological Event Scale (INES) was introduced in 1990[1] by the International Atomic Energy Agency (IAEA) in order to enable prompt communication of safety significance information in case of nuclear accidents.

The scale is intended to be logarithmic, similar to the moment magnitude scale that is used to describe the comparative magnitude of earthquakes. Each increasing level represents an accident approximately ten times more severe than the previous level. Compared to earthquakes, where the event intensity can be quantitatively evaluated, the level of severity of a man-made disaster, such as a nuclear accident, is more subject to interpretation. Because of the difficulty of interpreting, the INES level of an incident is assigned well after the incident occurs. Therefore, the scale has a very limited ability to assist in disaster-aid deployment.

As INES ratings are not assigned by a central body, high-profile nuclear incidents are sometimes assigned INES ratings by the operator, by the formal body of the country, but also by scientific institutes, international authorities or other experts which may lead to confusion as to the actual severity. 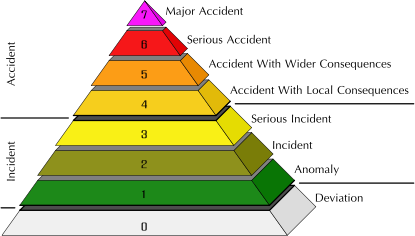 A number of criteria and indicators are defined to assure coherent reporting of nuclear events by different official authorities. There are seven nonzero levels on the INES scale: three incident-levels and four accident-levels. There is also a level 0.

The level on the scale is determined by the highest of three scores: off-site effects, on-site effects, and defence in depth degradation.

There have been two such events to date:

There has been only one such event to date:

Impact on people and environment
Limited release of radioactive ­material likely to require i­mplementation of some planned­ countermeasures.
Several deaths from ­radiation.

Impact on radiological barriers and control
Severe damage to reactor core.
Release of large quantities of radioactive material within an installation with a high probability of significant public exposure. This could arise from a major criticality accident or fire.

Impact on people and environment
Minor release of radioactive material unlikely to result in implementation of planned countermeasures other than local food controls.
At least one death from radiation.

Impact on radiological barriers and control
Fuel melt or damage to fuel ­resulting in more than 0.1% release of core inventory.
Release of significant quantities of radioactive material within an installation with a high ­probability of significant public exposure.

Impact on radiological barriers and control
Exposure rates of more than 1 Sv/h in an operating area.
Severe contamination in an area not expected by design, with a low probability of ­significant public exposure.

Impact on radiological barriers and control
Radiation levels in an operating area of more than 50 mSv/h.
Significant contamination within the facility into an area not expected by design.

Impact on defence-in-depth
Overexposure of a member of the public in excess of statutory ­annual limits.
Minor problems with safety components with significant defence-in-depth remaining.
Low activity lost or stolen radioactive source, device or transport package.

(Arrangements for reporting minor events to the public differ from country to country. It is difficult to ensure precise consistency in rating events between INES Level-1 and Below scale/Level-0)

There are also events of no safety relevance, characterized as "out of scale".[16]