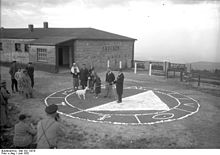 Joad second from right on the Brocken in June 1932

Cyril Edwin Mitchinson Joad (August 12, 1891 – April 9, 1953) was an English philosopher and broadcasting personality. He is most famous for his appearance on The Brains Trust, an extremely popular BBC Radio wartime discussion programme. He managed to popularise Philosophy and became a celebrity, before his downfall in the Train Ticket Scandal of 1948.

Joad was born in Durham, the only son of Edwin and Mary Joad (née Smith). In 1892 his father became an Inspector of Education and the family moved to Southampton, where he received a very strict Christian upbringing. Joad started school at the age of 5 in 1896, attending Lynam's Preparatory School (commonly called the Dragon School) in Oxford and then Blundell's School, Tiverton, Devon.

In 1910, Joad went up to Balliol College, Oxford. It was here that he developed his skills as a philosopher and debater. By 1912, he was a first class sportsman and Oxford Union debater. He also became a Syndicalist, a Guild Socialist and then a Fabian. In 1913, he heard about George Bernard Shaw through the newly founded magazine, the New Statesman. He developed a secure interest in Philosophy that acted as the building blocks for his career as a teacher and broadcaster. After completing his course at Balliol, achieving a Double First and John Locke Scholarship, Joad entered the Civil Service.

Joad entered the Board of Trade in 1914 after attending a Fabian Summer School. His aim was to infuse the Civil Service with a Socialist Ethos. He worked as a civil servant for the Labour Exchanges Department of the Board of Trade, which later became the Ministry of Labour. In the months leading up to the First World War he displayed "ardent" pacifism, which resulted in political controversy. Joad, Bernard Shaw, and Bertrand Russell became unpopular with many who were trying to encourage soldiers to fight for their country.

In May 1915, Joad married Mary White. They bought a home in Westhumble near Dorking in Surrey. The village, formerly home to Fanny Burney, was near to the founder of the Fabian Society, Beatrice Webb. Joad was so fearful of conscription that he fled to Snowdonia, Wales until it was safe to return. Joad's marriage was thought to be happy until 1921, when they separated. They had three children.

After Joad's separation from his wife Mary, he moved to Hampstead in London with a student teacher named Marjorie Thomson. She was to be the first of many mistresses, all of which were introduced as 'Mrs Joad'. He described sexual desire as "a buzzing bluebottle that needed to be swatted promptly before it distracted a man of intellect from higher things." He believed that female minds lacked objectivity, and he had no interest in talking to women who would not go to bed with him. By now Joad was "short and rotund, with bright little eyes, round, rosy cheeks, and a stiff, bristly beard." He dressed in shabby clothing as a test: if people sneered at this they were too petty to merit acquaintance.

Job interviews proved a great difficulty for Joad. He was very flippant and was disapproved of by many. In 1930, however, he left the Civil Service to fill the post of Head of the Department of Philosophy and Psychology at Birkbeck College, University of London. Although the department was small, he made full use of his great teaching skills. He popularised philosophy, and many other great philosophers of the day were beginning to take him seriously. For those that did not, Joad implied that they resented a blackleg who admitted outsiders to professional mysteries. With his two books, Guide to Modern Thought (1933) and Guide to Philosophy (1936) he became a well known figure in public society.

In his early life, Joad very much shared the desire for the destruction of the Capitalist system. He was expelled from the Fabian Society in 1925 because of sexual misbehaviour at its summer school, and did not rejoin until 1943. In 1931, disenchanted with Labour in office, Joad became Director of Propaganda for the New Party. Owing to the rise of Oswald Mosley's Pro-Fascist sympathies, Joad resigned, along with John Strachey. Soon after he became bitterly opposed to Nazism, but he continued to refuse military service. Joad gave his support to many pacifist organizations.

While at Birkbeck College, Joad became a participant in the most famous debate in the history of the Oxford Union Society, a society in which he had taken part during his undergraduate years. Devised by David Graham and debated on Thursday, February 9, 1933, was this question: “That this House will in no circumstances fight for its King and Country.” The topic was often interpreted as illustrating both the attitude of Oxford and the state of Europe at the time (Adolf Hitler had become chancellor of Germany just ten days prior to the debate). Joad was the principal speaker in favour of the resolution, which passed by a vote of 275 to 153. Joad’s speech was described as “well-organized and well-received, and probably the single most important reason for the outcome of the debate.”[1]

Joad was also interested in the supernatural and partnered Harry Price on a number of ghost-hunting expeditions, also joining the Ghost Club of which Price was the president. He involved himself in psychical research, traveling to the Harz Mountains to help Price to test whether the 'Bloksberg Tryst' would turn a male goat into a handsome prince at the behest of a maiden pure in heart (it did not).[2]

Joad crusaded to preserve the English countryside against industrial exploitation, ribbon development, overhead cables and destructive tourism. He wrote letters and articles in protest of the decisions being made to increase Britain's wealth and status, as he believed the short term status would bring long term problems. He organized rambles and rode recklessly through the countryside. He also had a passion for hunting.

Hating the idea of nothing to do, Joad organized on average nine lectures per week and two books per year. His popularity soared and he was invited to give many lectures and lead discussions. He also involved himself in sporting activities such as tennis and hockey, and recreational activities such as bridge, chess and playing the pianola (the player piano). He was a great conversationalist and enjoyed entertaining the distinguished members of society. His home was modest, but his hospitality was lavish.

After the outbreak of the Second World War (1939) he became disgusted at the lack of liberty being shown. He went as far as to beg the Ministry of Information to make use of him. Sure enough, in January 1940, Joad was selected for a wartime discussion programme called The Brains Trust. The BBC radio production was an immediate success, attracting millions of listeners.

Joad's prominence came from The Brains Trust which featured a small group that included Commander A B Campbell and Julian Huxley. His developed and matured discussion techniques, his fund of anecdotes and mild humour brought him to the attention of the general public.

The programme came to deal with difficult questions posed by listeners, and the panellists would discuss the question in great detail, and render a philosophical opinion. Examples of the questions ranged from "What is the meaning of life?" to "How can a fly land upside-down on the ceiling?" Joad became star of the show, his voice being the most heard on radio except for the News. Joad nearly always opened with the catchphrase "It all depends on what you mean by…" when responding to a question. Although there was opposition from Conservatives who complained about the political bias, the general public generally considered him the greatest British philosopher of the day. He had won the position of celebrity.

As Joad had become so well known, he was invited to give after-dinner speeches, open bazaars and even advertise tea. He also sold more books than ever before. He stood as a Labour candidate at a by-election in November 1946 for the Combined Scottish Universities constituency (although he lost). Joad hid his anxiety, and his pacifism had not survived the war. He was now beginning to renounce his agnostic ways and turn to the Christianity, the Church of England, which is evident in his book The Recovery of Belief. Even Socialism was unsatisfying when he saw the vast evil the war had brought. His career was more successful than ever before, and he became a common subject of discussion in both public and private society. But he also had many enemies, and they were to have the last laugh.

Joad once boasted in print that “I cheat the railway company whenever I can.”[3] In April 1948, Joad was convicted of travelling on a Waterloo-Exeter train without a valid ticket. Although he was a frequent fare dodger, he failed to give a satisfactory excuse. This made front-page headlines in the national newspapers, and the fine of £2 (£54 as of 2011) destroyed all hopes of a peerage and resulted in his dismissal from the BBC.[4] The humiliation of this had a severe effect on his health, and he soon became bed-confined at his home in Hampstead.[citation needed]

After the bed-confining thrombosis following his dismissal from the BBC in 1948, Joad developed cancer, and by 1952 he realised he was dying. He published the book The Recovery of Belief in this year, perhaps as a deathbed repentance of his former atheism. Joad died on 9 April 1953 at his home, 4 East Heath Road, Hampstead. He was 61. He is buried at Saint John’s-at-Hampstead Church in London.

Joad was one of the best known British intellectuals of his time, as famous as George Bernard Shaw and Bertrand Russell in his lifetime. He performed the difficult task of popularising philosophy, both in his books and by the spoken word.

"If it is, then the sooner they give up the pretence of playing with public affairs and return to private life the better. If they can not make a job of the House of Commons, let them at least make something of their own houses. If they can not learn to save men from the destruction which incurable male mischievousness bids fair to bring upon them, let women at least learn to feed them, before they destroy themselves." [5])

His leading role in the most famous debate of the Oxford Union Society has also helped to establish his legacy, which helped to make him a reputation as an absolute pacifist, a position which the Nazi menace of World War Two caused him to set aside.

Joad was invited to appear at the Socratic Club, an undergraduate society at Oxford University, where he spoke on January 24, 1944, on the subject, of "On Being Reviewed by Christians," an event attended by more than 250 students. This was a stepping stone in Joad's life, particularly at a time when he was reexamining his convictions. This reexamination eventually led to his return to the Christian faith of his youth, an event that he mentioned in his book, The Recovery of Belief, which was published in 1952. C. S. Lewis, President of the Socratic Club, is mentioned twice in this book, once as an influence on Joad through Lewis's book The Abolition of Man. Part of his legacy, then, was to return to the faith that he had set aside as an Oxford undergraduate and to defend that faith in his writings.

Joad wrote over 75 books in his lifetime including