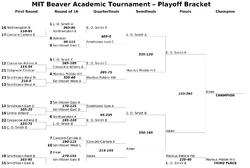 Example of a single-elimination tournament bracket

A single-elimination tournament, also called a knockout, cup or sudden death tournament, is a type of elimination tournament where the loser of each match or bracket is immediately eliminated from winning the championship or first prize in the event. This does not always mean that the defeated competitor will not participate further in the tournament: in some such tournaments, consolation or "classification" contests are subsequently held among those already defeated to determine the awarding of lesser places, for example, a third place playoff.

Where more than two competitors can play in each match, such as in a shootout poker tournament, players are removed when they can no longer play until one player remains from the group. This player moves on to the next round.

A simple way to describe a single-elimination tournament is that the winner of each match moves on and the loser goes home.

Assuming two competitors per match, if there are n competitors, there will be

rounds required, or if there are r rounds, there will be n = 2r competitors.

In the opening round, 2r − n competitors will get a bye. Often, the number of participants in a single-elimination tournament is fixed as a power of two, so that nobody gets a bye. For example, the tennis Grand Slam singles championships are tournaments of 128 players. This ensures all competitors will face opponents who have previously played the same number of matches.

The full schedule of pairings across all rounds (the bracket) may be allocated before the start of the tournament, or each round may be allocated at the end of the preceding round. Each successive round halves the number of competitors remaining, assuming there are no byes.

In cases where the number of competitive entities at the start of the tournament is not a power of two, some competitors may receive a bye in the first round, which entitles these competitors to advance to the second round automatically without playing. Often, these byes will be awarded to the highest-rated competitors in the event as a reward for some previous accomplishment; indeed, in some American team sports—most notably American football — the number of teams qualifying for the postseason tournament will be intentionally set at a number which is not a power of two, in order to provide such an advantage to a high-achieving team in the just-completed regular season. Additionally, the player/team getting byes may get them exclusively by luck or random chance (i.e. if there are 7 competitors, one random one will automatically advance to the next round)

Multiple rounds of byes are also possible: in the FA Cup, the teams in the top two league divisions enter in the third round "proper" (of eight); the two next-highest divisions' teams will have entered in the first round; lower-division teams in one of 6 preliminary rounds. Another example is the UEFA Europa League.

If some teams get a bye, the round at which they enter may be named the "first" round, with the earlier matches called a "preliminary" round, or "play-in games".

Names of rounds in various systems and competitions:

When matches are held to determine places or prizes lower than first and second (the loser of the final-round match gaining the latter position), these typically include a match between the losers of the semifinal matches called third place playoff, the winner therein placing third and the loser fourth. Sometimes, contests are also held among the losers of the quarterfinal matches to determine fifth through eighth places - this is most commonly encountered in the Olympic Games, with the exception of boxing, where both fighters are deemed to be third place. In one scenario, two "consolation semifinal" matches may be conducted, with the winners of these then facing off to determine fifth and sixth places and the losers playing for seventh and eighth; those are used often in qualifying tournaments where only the top five teams advance to the next round; or some method of ranking the four quarterfinal losers might be employed, in which case only one round of additional matches would be held among them, the two highest-ranked therein then playing for fifth and sixth places and the two lowest for seventh and eighth.

Opponents may be allocated randomly (such as in the FA Cup); however, since the "luck of the draw" may result in the highest-rated competitors being scheduled to face each other early in the competition, seeding is often used to prevent this. Brackets are set up so that the top two seeds could not possibly meet until the final round (should both advance that far), none of the top four can meet prior to the semifinals, and so on. If no seeding is used, the tournament is called a random knockout tournament.

One version of seeding is where brackets are set up so that the quarterfinal pairings (barring any upsets) would be the 1 seed vs. the 8 seed, 2 vs. 7, 3 vs. 6 and 4 vs. 5; however, this is not the procedure that is followed in most tennis tournaments, where the 1 and 2 seeds are placed in separate brackets, but then the 3 and 4 seeds are assigned to their brackets randomly, and so too are seeds 5 through 8, and so on. This may result in some brackets consisting of stronger players than other brackets, and since only the top 32 players are seeded at all in Tennis Grand Slam tournaments, it is conceivable that the 33rd-best player in a 128-player field could end up playing the top seed in the first round. While this may seem unfair to a casual observer, it should be pointed out that rankings of tennis players are generated by computers, and players tend to change ranking positions very gradually, so that a more equitable method of determining the pairings might result in many of the same head-to-head matchups being repeated over and over again in successive tournaments.

Sometimes the remaining competitors in a single-elimination tournament will be "re-seeded" so that the highest surviving seed is made to play the lowest surviving seed in the next round, the second-highest plays the second-lowest, etc. This may be done after each round, or only at selected intervals. In American team sports, for example, both the NFL and NHL employ this tactic, but the NBA does not (and neither does the NCAA college basketball tournament). MLB does not have enough teams in its playoff tournament where re-seeding would make a difference in the matchups, (The NFL is at the minimum, which is 6 from each league (or conference in the NFL, NBA or NHL) for a total of 12). The NBA's format calls for the winner of the first-round series between the first and eighth seeds (within each of the two conferences the league has) to face the winner of the first-round series between the fourth and fifth seeds in the next round, even if one or more of the top three seeds had been upset in their first-round series; critics have claimed that this gives a team fighting for the fifth and sixth seeding positions near the end of the regular season an incentive to tank (deliberately lose) games, so as to finish sixth and thus avoid a possible matchup with the top seed until one round later.

In some situations, a seeding restriction will be implemented; from 1975 until 1989, the NFL, and, since 1998, MLB have a rule where at the conference or league semifinal, should the top seed and last seed (wild card) be from the same division, they may not play each other; in that case, the top seed plays the worst division champion; the second-best division champion plays the wild card team.

The single-elimination format enables a relatively large number of competitors to participate. There are no "dead" matches (perhaps excluding "classification" matches), and no matches where one competitor has more to play for than the other.

The format is less suited to games where draws are frequent. In chess, each fixture in a single-elimination tournament must be played over multiple matches, because draws are common, and because white has an advantage over black. In association football, games ending in a draw may be settled in extra time and eventually by a penalty shootout, viewed by many fans as an unsatisfactory conclusion to a fixture, or by replaying the fixture. In various forms of one-day cricket, a bowl-out has been used in recent years to settle tied matches.

Another perceived disadvantage is that most competitors are eliminated after relatively few games. Variations such as the double-elimination tournament allow competitors a single loss while remaining eligible for overall victory.

In a random knockout tournament (single-elimination without any seeding), awarding the second place to the loser of the final is unjustified: any of the competitors knocked out by the tournament winner might have been the second strongest one, but they never got the chance to play against the losing finalist.

Also, if the competitors' performance is variable, that is, it depends on a small, varying factor in addition to the actual strength of the competitors, then not only will it become less likely that the strongest competitor actually wins the tournament, in addition the seeding done by the tournament organizers will play a major part in deciding the winner.[1] As a random factor is always present in a real world competition, this might easily cause accusations of unfairness.

Variations of the single-elimination tournament include:

Other common tournament types are