The PZL-Mielec M-18 Dromader (Polish: "Dromedary") is a single engine agricultural aircraft that is manufactured by PZL-Mielec in Poland. The aircraft is used mainly as a cropduster or firefighting machine.

PZL-Mielec, then known as WSK-Mielec, began to design the Dromader in the mid 1970s, with help of United States aircraft manufacturer Rockwell International. PZL-Mielec asked for Rockwell's help because of the political situation at the time: operating in an Eastern Bloc country, PZL wanted the aircraft to sell well worldwide, and the company realized that FAA certification would be important in reaching that goal. Rockwell on the other hand wanted to fit Polish high-power radial engines into its agricultural planes. As a result of this cooperation the Rockwell Thrush Commander aircraft was fitted with the PZL-3 engine, and the Polish designers created the higher payload M-18 Dromader by introducing the more powerful ASz-62 engine, making structural changes to the airframe, and increasing dimensions. This co-operation meant that the Dromader shares outer wing panels and part of a fuselage with the Thrush Commander.

The first prototype of the aircraft flew on August 27, 1976. In September 1978, the aircraft was given certification to fly in Poland. Certifications from many countries around the world followed soon.

Many aircraft of the M-18 type and its variations can still be seen around the world. They were sold to 24 countries, 200 are used in the USA.

Most Dromaders are easy to distinguish because of their yellow color. Over 740 had been built by 2006. Currently (2006) models M-18B and M-18BS are offered by PZL-Mielec. 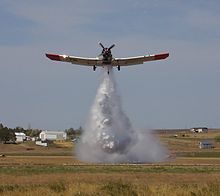