Biological hazards, refer to biological substances that pose a threat to the health of living organisms, primarily that of humans. This can include medical waste or samples of a microorganism, virus or toxin (from a biological source) that can impact human health. It can also include substances harmful to animals. The term and its associated symbol is generally used as a warning, so that those potentially exposed to the substances will know to take precautions. The biohazard symbol was developed by the Dow Chemical Company in 1966 for their containment products.[1]

It is used in the labeling of biological materials that carry a significant health risk, including viral samples and used hypodermic needles.

Bio hazardous agents are classified for transportation by UN number:[2] 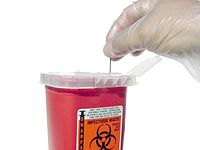 Immediate disposal of used needles into a sharps container is standard procedure.

The United States' Centers for Disease Control and Prevention (CDC) categorizes various diseases in levels of biohazard, Level 1 being minimum risk and Level 4 being extreme risk. Laboratories and other facilities are categorized as BSL (Biosafety Level) 1-4 or as P1 through P4 for short (Pathogen or Protection Level).

The biohazard symbol was developed by the Dow Chemical Company in 1966 for their containment products.[1] According to Charles Baldwin,[1] an environmental-health engineer who contributed to its development: "We wanted something that was memorable but meaningless, so we could educate people as to what it means." In an article in Science in 1967, the symbol was presented as the new standard for all biological hazards ("biohazards"). The article explained that over 40 symbols were drawn up by Dow artists, and all of the symbols investigated had to meet a number of criteria: "(i) striking in form in order to draw immediate attention; (ii) unique and unambiguous, in order not to be confused with symbols used for other purposes; (iii) quickly recognizable and easily recalled; (iv) easily stenciled; (v) symmetrical, in order to appear identical from all angles of approach; and (vi) acceptable to groups of varying ethnic backgrounds." The chosen scored the best on nationwide testing for memorability.[4]