Journey Back to Oz

Journey Back to Oz 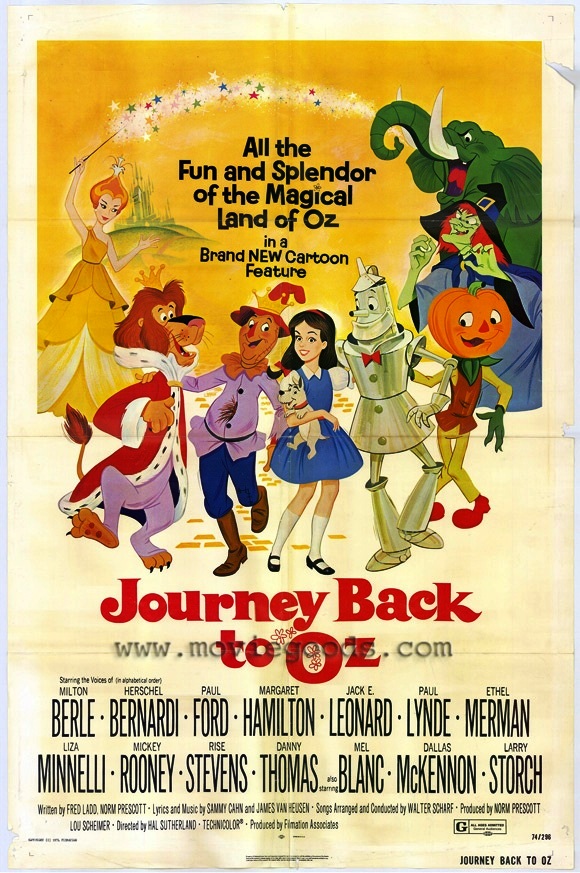 "Journey Back To Oz" is an official animated sequel to the 1939 film "The Wizard of Oz". It is loosely based on 's second Oz , "". Baum received no screen credit.

Thanks to another twister, Dorothy is knocked unconscious and once again dreams herself into the , where she meets new characters such as Pumpkinhead, Woodenhead Stallion (a horse loosely based on the Sawhorse), (another wicked witch who has now taken over the land of Oz, voiced by ), and killer elephants.

The Wizard was nowhere to be found, at least in the theatrical version of the film. A television version shown in 1976 featured live-action segments starring as the Wizard.

A special edition was released on . This DVD features a feature-length audio commentary, interviews with creators , Hal Sutherland, and Fred Ladd, behind the scenes photo gallery, image galleries featuring poster art and animation cels, a sing-a-long feature, the Bill Cosby interstitials used in the TV version (presented separately from the original theatrical version contained on the disc), and the first draft script and storyboards.

The start of the movie uses "The Awakening", a piece of by , also used as the theme for 's .

After a Kansas tornado sideswipes the Gale farm and causes a loose gate to knock her unconscious, Dorothy is returned to the land of Oz with Toto. The first new character they meet is a talking signpost, which has three signs pointing in three different directions, and each sign says "", so Dorothy and Toto are going to have to find it themselves. They then fall into some spooky woods where they meet Pumpkinhead, the unwilling servant of Mombi, the cousin of both the deceased Wicked Witch of the East(who was killed when Dorothy's house fell on her in the first movie) and the . Toto chases a cat to a small cottage where Dorothy has the distinct displeasure of meeting Mombi's pet crow, and Mombi herself face-to-warty-face. Dorothy is pushed into a chair which comes to life, and hooks Dorothy's arms. Pumpkinhead sneaks into the house while Mombi is gone to get some more wood for the fire; she is brewing something big (and heavy): Green elephants. Pumpkinhead frees Dorothy, and they flee. After finding Dorothy gone, and knowing Pumpkinhead is responsible, Mombi flies out on her broom, and says their warning the Scarecrow won't help when her green elephants come crashing through the gate.

While heading to the Emerald City, they discover a horse upside-down on a pole. They get the horse off the pole, and he introduces himself as Woodenhead Stallion III (the third), and he explains how he ended up on the pole (he was a merry-go-round horse, who fell from the merry-go-round). Woodenhead takes them to the Emerald City, where Dorothy warns the Scarecrow about Mombi's green elephants. Unfortunately, Mombi happens to arrive moments later, and Toto and the Scarecrow are captured. Dorothy, Pumpkinhead and Woodenhead flee to Tinland, and try to convince the Tin Man to help them. However, after hearing that Mombi's army consists of green elephants, he turns chicken, and wimps out, suggesting they ask the .

The Lion puts on his best brave act, saying he'll snap off the elephants' tusks and use them for toothpicks, but, like the Tin Man, the Lion turns chicken after hearing the elephants are magical, and suggests they go to find , the Good Witch of the North. Glinda appears at that very moment with her Glinda Bird on her arm. The bird uses its Tattle Tail to show what's going on at the palace. Glinda then gives Dorothy a little silver box. She instructs Dorothy to open the box only in the Emerald City, and then only in case of a dire emergency. Dorothy repeats Glinda's warning, and then opens a hollow panel under Woodenhead's saddle where she hides the box, and they ride off. Glinda tells her Glinda Bird to keep them tuned in.

Mombi has been watching them through her crystal ball, and knows that their path will take them through the Ferocious Forest. Using her magic, Mombi brings the trees to life. Luckily, Glinda is also keeping a watchful eye on things, and she conjours up a golden hatchet, which she zaps to Pumpkinhead. One of the trees snatches the axe from Pumpkinhead, but ends up hitting one of the other trees, turning it to gold, and making it bloom. The tree with the axe ends up hitting the other trees, turning them gold too, and finally, ends up doing the same to himself. Woodenhead continues to carry Dorothy and Pumpkinhead back to the Emerald City.

When they arrive, Mombi's elephants surprise them, but, when Dorothy flips open Glinda's box, a large army of mice emerges from the tiny box, and scares the elephants off. Mombi sees the elephants in retreat, but doesn't see the mice chasing them. She brews a potion to shrink Toto to mouse-size so she can feed him to her cat. One of the magic mice scares Mombi, who throws the potion all over her pet crow, and a drop drips from the crows perch, landing on the cat. The magic mice are much larger than normal mice, and the tiny crow and cat are scared off.

Running outside, Mombi disguises herself as a rose with poisonous thorns. Unfortunately, the elephants trample all over her, killing her. The elephants disappear, and the Scarecrow explains that when a witch dies, all her magic dies with her. That also means that Pumpkinhead loses the life Mombi gave him. However, he comes back to life when one of Dorothy's tears falls on his head, and Glinda tells Dorothy that there is a magic stronger than Mombi's, and her own. The strongest magic in all the world; faith and love.

The Scarecrow makes Woodenhead the head of the Oz cavalry, and knights Pumpkinhead. Now, all Dorothy wants is to go home to Kansas. The Scarecrow flips through the Constitution of Oz, and reads a section that states that a visitor to Oz may return the way they came if similar transportation is available. After Dorothy reveals she came by cyclone, Glinda asks for some leaves. Pumpkinhead gives her some of the leaves from his neck, and Glinda waves her wand, and the leaves take on the form of a cyclone, which takes Dorothy and Toto back home to Kansas.

* — other adaptations of the "Oz" books