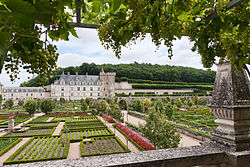 Garden at the Château

The Château de Villandry is a castle-palace located in Villandry, in the département of Indre-et-Loire, France.

The lands where an ancient fortress once stood were known as Colombier until the 17th century. Acquired in the early 16th century by Jean Le Breton, France's Controller-General for War under King Francis I, a new château was constructed around the original 14th-century keep where King Philip II of France once met Richard I of England to discuss peace. It is also known for its beautiful gardens.

The château remained in the Le Breton family for more than two centuries until it was acquired by the Marquis de Castellane. During the French Revolution the property was confiscated and in the early 19th century, Emperor Napoleon acquired it for his brother Joseph Bonaparte.

In 1906, Joachim Carvallo purchased the property and poured an enormous amount of time, money and devotion into repairing it and creating what many consider to be the most beautiful gardens anywhere. Its famous Renaissance gardens include a water garden, ornamental flower gardens, and vegetable gardens. The gardens are laid out in formal patterns created with low box hedges. In 1934, Château de Villandry was designated a Monument historique. Like all the other châteaux of the Loire Valley, it is a World Heritage Site.

Still owned by the Carvallo family, the Château de Villandry is open to the public and is one of the most visited châteaux in France.