Sutton Courtenay is a village and civil parish on the River Thames 2 miles (3.2 km) south of Abingdon and 3 miles (4.8 km) northwest of Didcot. It was part of Berkshire until the 1974 boundary changes transferred it to Oxfordshire.

In the past, agriculture, a local paper mill and domestic service were the main sources of employment within the village. Now the prime employers include local scientific establishments and Didcot power station. There are many commuters using Didcot railway station, London being a mere 45 minutes away. Didcot Power Station itself falls within the boundaries of Sutton Courtenay parish, as do several large quarries that have been used for gravel extraction, and then used for landfill activities taking domestic refuse from London via a separate rail terminal.

Settlement in the parish dates from at least the Neolithic period,[2] when the alluvial plains of the Thames made the area fertile for agriculture. The Romans were present in the village as evidence of a ceremonial site and road survive. Excavations have revealed rough Saxon huts of the early stages of Anglo-Saxon colonization,[3] but their most important enduring monument in Sutton was the massive causeway and weirs which separate the millstream from Sutton Pools. The causeway was probably built by Saxon labour.

Written records of Sutton's history began in 688 when Ine, King of Wessex, endowed the new monastery at Abingdon with the manor of Sutton. In 801, Sutton became a royal vill,[1] with the monastery at Abingdon retaining the church and priest's house. It is believed that this was on the site of the 'Abbey' in Sutton Courtenay. The Domesday Book of 1086 shows that the manor of 'Sudtone' was owned half by the King and farmed mainly by tenants who owed him tribute. There were three mills, 300 acres (1.2 km2) of river meadow (probably used for dairy farming) and extensive woodlands where pigs were kept.

Sutton became known as Sutton Courtenay after the Courtenay family took residence at the Manor in the 1170's. Reginald Courtenay became the first Lord of Sutton after he had helped negotiate the path of the future king, Henry II, to the throne.[4]

At one time Amey plc had its head office in Sutton Courtenay.[5] In 2003 Amey plc had been in financial trouble and was purchased by Spain's largest construction firm, Ferrovial Servicios. At the time it employed approximately 400 people at its Sutton Courtenay site. [6]

In August 1998 the large mock-tudor mansion Lady Place, former home of nutritionist Hugh MacDonald Sinclair, was destroyed when fire ripped through the building. [7]

On 30 January 2008 there was an explosion and fire at Sutton Courtenay Tyres and petrol station, which led to about 100 nearby houses being evacuated for fears that acetylene cylinders might explode.[8]

In the Norman era, the oldest surviving buildings of the village were built. The 'Norman Hall' is one of the oldest buildings in the village, being built in about 1192[9] in the reign of Richard I, Coeur de Lion. Across the road from the Norman Hall is The Abbey, actually the rectory house, which dates from about 1300. The 14th-century Great Hall has an arched oak roof. The manor house was formerly known as Brunce's Court when it was the home of the Brunce family, one of whom, Thomas Brunce, became Bishop of Norwich. It is a five-gabled, two-winged house which has had many additions over the centuries but originated as the great medieval royal hall, frequented by King Henry I and then taken over by the Courtenay family, who gave their name to the village. All Saints' Church was also built at this time (see below), and is a fine example of local Norman and Medieval architecture. 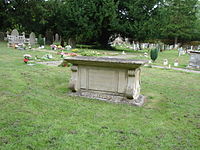 Asquith's Grave at All Saints' Church

In 1912 the Prime Minister H.H. Asquith chose The Wharf (which he built in 1913) and the adjoining Walton House for his country residence. Asquith and his large family spent weekends at The Wharf where his wife Margot held court over bridge and tennis. She converted the old barn directly on the river which served for accommodation for the overflow of her many weekend parties. A painting of the period by Sir John Lavery (now in the Hugh Lane Gallery in Dublin) shows Elizabeth Asquith and her young friends lounging in boats by the riverside. Asquith signed the declaration that took Britain into the First World War here. He and his family remained in the village after he resigned as Prime Minister. He is buried in All Saints' churchyard (see below).

Sutton Courtenay Church as it stands today, originated in the 12th century.[10] The interior shows Norman zig-zag work and later carved capitals. On the tower door, there are crusader crosses inscribed by soldiers either hoping for or giving thanks for a safe return from the Crusades. The main south door is surrounded by a fine brick porch built with money left to the poor of the parish by the 15th-century Bishop Thomas Bekynton of Bath & Wells. The brick-built south porch also has a room above reached by a narrow stairway from inside the church. Other fittings include a 17th-century wineglass pulpit (installed in 1901), a carved mid-12th century font with fleur-de-lys pattern and three late 14th-century misericords. There is a close resemblance between the misericords at Sutton Courtenay and those created a short time afterwards at Soham in Cambridgeshire and Wingfield, Suffolk. It is possible that the same itinerant carver was responsible for all three sets. The church was nearly destroyed during the Civil War when munitions stored by the Parliamentarian vicar exploded in the church.[9][10] 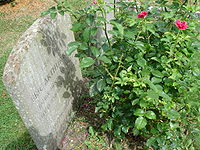 The churchyard is notable as the location of the burial place of Eric Arthur Blair, better known by his pen name, George Orwell. As a child he fished in a local stream. He wanted to be buried in the churchyard of whichever was the nearest church to where he died. However he died in London and none of the local churches had any space in their graveyards. Thinking that he might have to be cremated against his wishes, his widow asked her friends whether they knew of a church that had space for him. David Astor, a friend of Orwell's who lived in Sutton Courtenay, explained the problem to his local vicar, and arrangements were made.

The Churchyard also contains the grave of David Astor and that of Lord H. H. Asquith, Earl of Oxford. Asquith so much loved the simplicity of the village that he chose to be buried there rather than in Westminster Abbey.