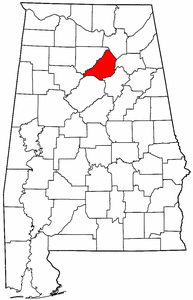 Blount County was created by the Alabama Territorial legislature on 1818 Feb. 6, from land ceded to the Federal government by the Creek Nation on 1814 Aug. 9. It was named for Gov. Willie G. Blount of Tennessee, who provided assistance to settlers in Alabama during the Creek War of 1813-14. It lies in the northeastern section of the state, generally known as the mineral region. Blount County is bordered by Cullman, Marshall, Etowah, Jefferson, Walker and St. Clair Counties. The county is drained by the Locust and Mulberry Forks of the Black Warrior River. Blount County contains 651 square miles. The Warrior coal field is located in Blount County. Bear Meat Cabin / Blountsville was the first settlement in Blount County and the county seat. The town was established by Caleb Fryley and John Jones in 1816 as Bear Meat Cabin. The post office was opened in 1821. Blountsville was incorporated December 13 ,1827. In 1889, an election resulted in its county seat being transferred to .

Blount County is home to an abundance of outdoor activities, such as and a few extensions of the which are popular with kayakers. The county also home to numerous covered bridges, including the Swann Covered Bridge, the Horton Mill Covered Bridge, and the Easley Covered Bridge.