Proto-Romanian (also known as "Common Romanian", româna comună or "Ancient Romanian", străromâna) is a Romance language evolved from Vulgar Latin and considered to have been spoken by the ancestors of today's Romanians and related Balkan Latin peoples (Vlachs) before ca. 900 AD.

In the 9th century Proto-Romanian already had a structure very distinct from the other Romance languages, with major differences in grammar, morphology and phonology and already was a member of the Balkan linguistic union.[citation needed] Most of its features can be found in the modern Eastern Romance languages. It already contained around a hundred loans from Slavic languages, including words such as "trup" (body),[dubious – discuss] as well as some Greek language loans via Vulgar Latin, but no Hungarian words.

It was broken into the following modern languages and their dialects:

The first language that broke the unity was Aromanian, in the 9th century, followed shortly after by Megleno-Romanian. Istro-Romanian was the last to break the link with Daco-Romanian in the 11th century.[citation needed]

The place where Proto-Romanian formed is still under debate; most historians put it just to the north of the Jireček Line. See: Origin of Romanians.

The Roman occupation led to a Roman-Thracian syncretism, and similar to the case of other conquered civilisation (see Gallo-Roman culture developed in Roman Gaul), had as final result the Latinization of many Thracian tribes which were on the edge of the sphere of Latin influence, eventually resulting in the possible extinction of the Daco-Thracian language (unless, of course, Albanian is its descendant), although traces of it are still preserved in the Eastern Romance substratum. Starting from the 2nd century AD, the Latin spoken in the Danubian provinces starts to display its own distinctive features, separate from the rest of the Romance languages, including those of western Balkans (Dalmatian).[1] The Thraco-Roman period of the Romanian language is usually delimited between the 2nd (or earlier, via cultural influence and economic ties) and the 6th or 7th century.[2] It is divided, in turn, into two periods, with the division falling roughly in the 3rd-4th century. The Romanian Academy considers the 5th century as the latest date when the differences between Balkan Latin and western Latin could have appeared,[3] and that between the 5th and 8th centuries, this new language – Romanian - switched from Latin speech, to a neolatine vernacular idiom, called Română comună.[4][5] 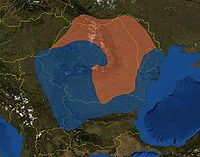 Map showing the area where Dacian was spoken. The blue area shows the Dacian lands conquered by the Roman Empire. The red area was inhabited by Free Dacian tribes and others. 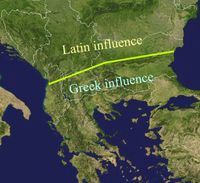 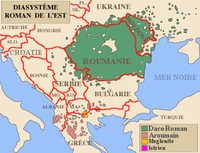 Map of Balkans with regions inhabited by Romanians/Vlachs highlighted

The evolution of the Eastern Romance languages through the ages.

Referring to this time period, of great debate and interest is the so called "Torna, Torna Fratre" episode. In Theophylactus Simocatta Histories, (c. 630), the author mentions the words "τóρνα, τóρνα". The context of this mention is a Byzantine expedition during Maurice's Balkan campaigns in the year 587, led by general Comentiolus, in the Haemus, against the Avars. The success of the campaign was compromised by an incident: during a night march...

"a beast of burden had shucked off his load. It happened as his master was marching in front of him. But the ones who were coming from behind and saw the animal dragging his burden after him, had shouted to the master to turn around and straighten the burden. Well, this event was the reason for a great agitation in the army, and started a flight to the rear, because the shout was known to the crowd: the same words were also a signal, and it seemed to mean “run”, as if the enemies had appeared nearby more rapidly than could be imagined. There was a great turmoil in the host, and a lot of noise; all were shouting loudly and goading each other to turn back, calling with great unrest in the language of the country “torna, torna”, as a battle had suddenly started in the middle of the night."[6]

Nearly two centuries after Theophylactus, the same episode is retold by another Byzantine chronicler, Theophanes Confessor, in his Chronographia (c. 810–814). He mentions the words: "τόρνα, τόρνα, φράτρε" [torna, torna fratre]:

"A beast of burden had thrown off his load, and somebody yelled to his master to reset it, saying in the language of their parents/of the land: “torna, torna, fratre”. The master of the animal didn't hear the shout, but the people heard him, and believing that they are attacked by the enemy, started running, shouting loudly: “torna, torna”".[7]

The first to identify the excerpts as examples of early Romanian was Johann Thunmann in 1774.[8] Since then, a debate among scholars had been going on to identify whether the language in question is a sample of early Romanian,[9] or just a Byzantine command [10] (of Latin origin, as it appears as such–torna–in Emperors Mauricius Strategikon), and with “fratre” used as a colloquial form of address between the Byzantine soldiers.[11] The main debate revolved around the expressions ἐπιχώριoς γλoσσα (epichorios glossa - Theopylactus) and πάτριoς φωνή (patrios fonē - Theophanes), and what they actually meant.

An important contribution to the debate was Nicolae Iorga's first noticing in 1905 of the duality of the term torna in Theophylactus text: the shouting to get the attention of the master of the animal (in the language of the country), and the misunderstanding of this by the bulk of the army as a military command (due to the resemblance with the Latin military command).[12] Iorga considers the army to have been composed of both auxiliary (τολδον) Romanised Thracians—speaking πιχωρί τε γλώττ (the “language of the country” /”language of their parents/of the natives”) —and of Byzantines (a mélange of ethnicities using Byzantine words of Latin origin as official command terms, as attested in the Strategikon).[13]

This view was later supported by the Greek historian A. Keramopoulos (1939),[14] as well as by Al. Philippide (1925), who considered that the word torna should not be understood a solely military command term, because it was, as supported by chronicles, a word “of the country”,[15] as by the year 600, the bulk of the Byzantine army was raised from barbarian mercenaries and the Romanic population of the Balkan Peninsula.[16]