Infobox_Film
name = Within Our Gates 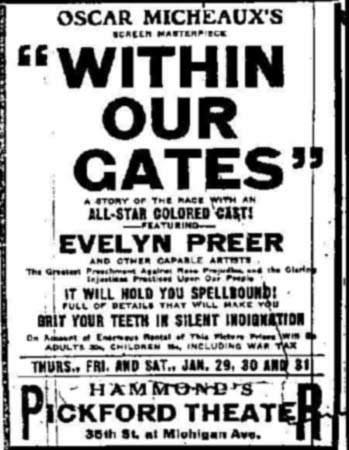 "Within Our Gates" is a 1920 silent race film that dramatically depicts the racial situation in America during the violent years of Jim Crow, the Klan, the Great Migration, and the emergence of the "New Negro." The story focuses on an woman who goes North in an effort to help a minister in the Deep South raise money to keep a school open for poor Black children. Her romance with a black doctor eventually leads to revelations about her family's past that expose the racial skeletons in America's closet, most famously through the film's depiction of the injustice of lynching. Produced, written and directed by novelist , it is the oldest known surviving film made by an director. The film, which was written and directed by Micheaux, stars , Flo Clements, James D. Ruffin, Jack Chenault, William Smith and Charles D. Lucas.

Not seen for seventy-five years, a single print of the film, entitled "La Negra" was found in . A brief sequence in the middle of the film was lost. Only four of the original titles survived, the rest having been removed for translation. In 1993, the Motion Picture Conservation Center restored the film as close to the original as possible. The Spanish titles were retranslated into English by Gene DeAnna. He removed explanatory material which had been added and reproduced the style which Micheaux used in his books. The missing sequence was summarized with an intertitle frame.

Two events spurred the film's creation: the release of 's classic "" four years earlier, with its heroic portrayal of the , and the .

"Within Our Gates" was the second of forty films directed by Micheaux. With a limited budget of just $15,000, Michaeux was forced to borrow costumes and props. He had no opportunity to reshoot scenes.

The film opens with Sylvia Landry (), a young African American woman, visiting her cousin Alma in the North, while she waits for Conrad to return and marry her. Alma, however, is also in love with Conrad, and prefers to see Sylvia married off to her brother-in-law Larry, a gambler and criminal. She hides a letter sent by Conrad, announcing his arrival. Alma arranges for Sylvia to be caught in a compromising position by Conrad when he finally returns. Conrad storms off and leaves for , while Larry kills a man during a game of . With nothing to keep her up North, Sylvia returns to the South.

There Sylvia meets Rev. Jacobs, a minister who runs a school for black children. People from all over turn to the minister to educate their children and give them a chance for the future. The school is overcrowded, and he cannot continue on the small amount offered by the local government for education. With the school faced with closure, Sylvia volunteers to return to the North to raise $5,000.

At first, the trip is a failure. She cannot raise the money, her purse is stolen, though a local man, Dr. Vivian, manages to get it back for her. Then Sylvia is involved in an autombile accident when she tries to save a young child playing in the street from being hit by a car. The car belongs to a wealthy philanthropist, Mrs. Elena Warwick, who hears of Sylvia's mission and decides to give her the money. Mrs. Warwick's friend, Mrs. Stratton, a southerner, attempts to discourage her, but this only infuriates Mrs. Warwick, who increases her donation to $50,000. The school is saved, and Sylvia can return home.

Meanwhile, Dr. Vivian has fallen in love with Sylvia. He goes to Alma, who tells him about Sylvia's past. She was raised by a poor Black family, the Landry's, who managed to provide her with an education. However, Mr. Landry is wrongfully accused of the murder of an unpopular but wealthy landlord, Mr. Gridlestone, and the family is killed by a mob&mdash;the parents are lynched and their son is hunted down and escapes after nearly being shot.

Sylvia escapes, but she is chased by Mr. Gridlestone's brother, who tries to her. When he notices a scar on her breast, he realizes that Sylvia is actually his daughter through his marriage to a local black woman. He had paid for her education.

"Within Our Gates" was initially rejected by the Board of Censors in Chicago when Micheaux first submitted the film in December 1919. An article in the "Chicago Defender" of 17 January 1920 claimed "This is the picture that it required two solid months to get by the Censor Boards." A week later the "Defender" reported "Those who reasoned with the spectacle of last July in Chicago ever before them, declared the showing pre-eminently dangerous; while those who reasoned with the knowledge of existing conditions, the injustices of the times, the lynchings and handicaps of ignorance, determined that the time is ripe to bring the lesson to the front."

Critics of the film feared that the vivid lynch and attempted rape scenes would spark further interracial violence in a city still tense from the riots of July. Officials in Omaha, New Orleans, and other cities stated these objections when they refused permission to screen the film, or demanded that these sensational scenes be cut. Despite, or perhaps in part because, of the controversy, the film garnered large audiences in Chicago when it was released in January 1920. Apparently the film often screened in different cut versions. For example, an article in the "Defender" reported that on Tuesday, February 24th of 1920, "Within Our Gates" "will be shown" at the States Theater in Chicago "without the cuts which were made before its initial presentation." Other evidence of cuts included extant film stills of scenes that did not appear in the surviving film copy, as well as viewers' descriptions that are different from the film as we know it.

The film is considered an important document of African American life in the years immediately following , when was still rampant throughout the United States. In 1992, "Within Our Gates" was selected for preservation in the United States by the as being "culturally, historically, or aesthetically significant".

His movement back and forth from North to South repeated that of D. W. Griffith, who used a North-South marriage plot. Griffith dramatized a white reunion of regions that canceled the legacy of Reconstruction to leave blacks out of the national picture. Micheaux's film ended with a wedding as well, but his occurred between two sophisticated African Americans. His protagonists from the South and the North lay claim to the whole Nation. They did this in the face of discriminatory treatment of blacks in the military during World War I, and eruptions of violence that met some returning African American veterans.

Critics (such as Jane Gaines, Ronald Green, and Pearl Bowser and Louise Spence) celebrated the skill with which Micheaux intercut the lynching of the Landry family with the attempted rape of Sylvia by Gridlestone. This editing deconstructed the ideology that whites had used in justifying lynching as punishment of black men for alleged sexual assaults against white women. The real story, as Micheaux demonstrated, was quite the opposite. His work reminded the audience of the long-standing practice of sexual predation by white men against black women, which has its roots in slavery days. Many other episodes turned out to be cleverly edited in ways that both showed and deconstructed white visual traditions and white ideologies.

Notable, too, was the detailed layering of allusions to current social and political events, from the death of Theodore Roosevelt to the heroism of African American soldiers in the war to debates in the Senate over Jim Crow and peonage. The film's weaknesses may be excused by Michaeux's extremely limited budget and punishing schedule, and by the fragmentary nature of the only surviving print. In fact, we will probably never know what the "original" film looked like, or whether the only extant version is what Micheaux originally intended.

The film attempted to portray the many different faces of contemporary African American society. There were heroes and heroines, like Sylvia and Rev. Jacobs, but there were also criminals like Larry and lackeys like a minister whom Mrs. Stafford supported, who tried to encourage African Americans to reject suffrage. Mr. Gridlestone's servant Efram attempted to ingratiate himself with the local white population by denouncing Mr. Landry as the murderer, even though he did not actually see the crime committed. Though he celebrated his relationship with the white community, Efram was lynched when the mob failed to find the Landrys.

Micheaux recognized the complexity of African American life, particularly in the Deep South. He was reluctant to blame only whites for the poverty of Blacks. He criticized Blacks who helped to perpetuate their condition for personal gain.

Some critics have challenged what they considered to be racism that Micheaux displayed in the film. In addition to his scathing critique of Black society, Micheaux seemed to prefer lighter-skinned Blacks as his heroes and heroines. He may have modelled Sylvia after characters played by . In fact, Evelyn Preer, who played Sylvia, was instructed to wear chalk on her face to make herself appear lighter-skinned. She and other "positive" characters appeared to be attempting to "pass" as white.Fact|date=November 2007