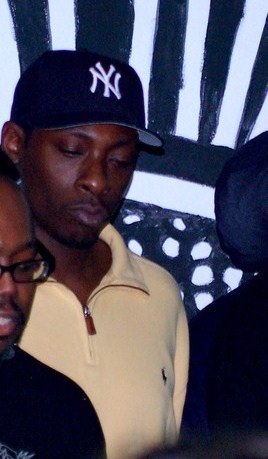 Pete Rock (born Peter Phillips, [ [http://www.sing365.com/music/lyric.nsf/Pete-Rock-and-CL-Smooth-Biography/8806E29CAA7F9E3548256A34000B3A8B Pete Rock And Cl Smooth Biography ] ] in ) is an American , , and emcee of descent. He rose to prominence in the early '90s as one half of the critically acclaimed group . After the duo went their separate ways, Rock continued with a [SoundSlam.com 2008 [http://www.soundslam.com/articles/news/news.php?news=080131_peterock Pete Rock Enlisted As "NY's Finest"] Retrieved , ] solo career that has garnered him worldwide respect, if little in the way of mainstream success. Rock played a major role in the merging of elements from into hip hop music, along with , , The Roots and . Considered one of the greatest hip hop producers of all time [ [http://rap.about.com/od/toppicks/ss/Top50Producers_8.htm Top 50 Hip-Hop Producers ] ] [ [http://supertalk.superfuture.com/archive/index.php/t-1957.html Top 5 best hip-hop producers and WHY [supertalk archive - superfuture :: supertalk ] ] [ [http://cratekings.com/top-50-greatest-producers-in-hip-hop-and-rap/ Top 50 Greatest Producers In Hip Hop and Rap ] ] , he is often mentioned alongside , and , as one of the mainstays of 1990s production. Pete Rock is also the older brother and younger cousin, respectively, of rappers and .

The third of seven children, Pete Rock was born in the borough of . His family moved to when he was 7 years old. He attended High School in Mount Vernon, where he would meet his future recording partner . According to Rock, his n father was also a part time DJ, who had an impressive record collection. Rock would often accompany his father to a called Wembley in the Bronx, and watch as he spun records for the people present.

His first job was as a , in his neighborhood.

His first major exposure to the hip-hop audience was in 1987 with , as a DJ on 's radio show "In Control With Marley Marl." The 17-year-old Phillips was recognized by the listening audience as the man "puttin' in work", as he would use double copies of each record to cut up every song he played, when most New York DJs would only use double copies on every 3rd or 4th song. Propelled by the growth of his popularity, he began producing in the early 1990s. In 1991 he joined with CL Smooth to released the "".

The following year saw "", the first of two full length albums, released to critical acclaim and hailed as a classic by many. During this period, Pete Rock began to produce songs for other acts such as "Down With the King" for , and "The World Is Yours" for , as well remixing singles for ("You Can't Stop The Prophet"), Public Enemy ("Shut 'em Down"), and ("Juicy" - the original of which was allegedly based on Rock's own demo). Pete and CL followed up "Mecca" in 1994 with "The Main Ingredient". Like its predecessor, "The Main Ingredient" also received wide critical acclaim, however soon after the albums release the duo went their separate ways, with Rock focusing on production work for other artists.

In 1995, he formed the group INI, with , and and released the classic 12" "Fakin' Jax". The trio recorded an album, "", which was heavily bootlegged and remained unreleased until 2003, when BBE Records picked it up for distribution. The release of this album was coupled with another mid-90s Pete Rock-produced album, DeDa's "".

While working as a DJ with Marley Marl on 's Future Flavas show, Rock was able to forge a relationship with Loud Records, allowing him to release his solo album "Soul Survivor" in the summer of 1998. After being dropped from the Loud imprint, Rock signed with Rapster/BBE under his own label Soul Brother Recordings. He has since continued to release solo albums, including "" in 2001 and 2004's "". In that same year he also produced the bulk of 's "My Own Worst Enemy", as well as a track for the all-girl rap group Northern State.

Recently, Pete Rock has returned to greater visibility, mainly through a closer relationship with the . Their collaborations began with "Soul Survivor", which featured , , and on various tracks, and continued on its follow-up, which featured both and . He also has produced three tracks on Ghostface's release "" and labelmate 's second album, "Made in Brooklyn".

Pete Rock has cultivated a relationship with Brooklyn, NY based Nature Sounds Records. He recorded the song "The PJs", which features Raekwon and Masta Killa, released on the Nature Sounds compilation "Natural Selection". He released an album entitled "" in February 2008, featuring , Masta Killa, , Redman, Papoose, and , among others, also on Nature Sounds. The lead single from the album is entitled "914" and features rappers and . He is scheduled to appear on albums by , , Termanology, , Royal Flush, , , , , , , and others. He is also working with DJ/Rapper Doo Wop under the name Tango & Cash (taken from the film of the same name).

Through the years, Rock has helped to jumpstart the careers of several artists. His first project outside of Pete Rock & CL Smooth was the hardcore duo YG'z, who released an called "Street Nigga" in 1993, with 4 out of the 6 tracks produced by Rock, however they were quickly dropped from their deal with Reprise Records.

His next venture, INI, was a group featuring Rock, his younger brother , Rass and rapper . They released a single, "Fakin' Jax", through in 1995, before their debut album, "", was shelved by the label. The other two members continue to record solo material, albeit only sporadically. In an interview Rock elaborated on the situation:

Another mid-1990s artist, DeDa, also met the same fate with his album "The Original Baby Pa", although both this and INI's album were eventually released as a double album package in 2003. Other associated artists include Meccalicious, who recorded a few songs under Pete Rock's guidance (sometime around 1997), before disappearing from the music scene altogether.

Rock has had some success, however, overseeing and jumpstarting the career of hardcore underground favorites The UN; a group featuring 4 MCs, including former member Rock Marciano. Rock premiered the group on the single "Nothin' Lesser" from his "PeteStrumentals" album, and they went on to release the fairly successful album, "UN Or U Out", in July 2004, featuring production by Rock, , and several others.

Since their split in 1995, Pete Rock's relationship with CL Smooth has been highly unpredictable. Although the pair briefly united for the reflective "Da Two" from Rock's "Soul Survivor" album in 1998, they avoided entertaining requests for a reunion album until 2001, when they once again teamed up for "Back on Da Block" from Rock's "PeteStrumentals".

In their interviews during this period, it appeared as though a new album was underway. As Rock would explain:

The pair went on a short international tour culminating in their well-received show at London's Jazz Cafe, however, soon after this they declined to comment any further on the new album, which never materialized (although Smooth did make three separate appearances on "Soul Survivor II"). Eventually Smooth would confirm rumors of a rift in an interview with AllHipHop.com, [http://www.allhiphop.com/features/?ID=882] in which he appeared angry and frustrated with his former partner, saying "I didn’t ask him to be a superhero" and "I’m not the problem." In an interview taken in December 2006, Rock [http://youtube.com/watch?v=qhswoGRXhls ruled out any further collaborations with Smooth] but stated that he holds no grudges against his former partner.

Pete Rock builds his beats from samples, the majority of which are taken from obscure R&B, funk, and jazz records. Early on in his career he would also sample drum breaks such as 's "Zimba Ku" for 's "Letter To The Future". Pete Rock heavily used the E-MU SP1200 as well as the [S950] —he's currently moved onto using the MPC—for his productions.Pete Rock tends to use the samples as palettes for his beats, chopping (cutting the sample into smaller parts), filtering (altering the frequencies of the sample), and layering several samples, often within the same song.

While this technique was applied long before Rock (on 's "" or the work of for example), Rock's work is distinctive for the way in which he uses samples to achieve a hazy, droning effect. He is also noted for his resonant basslines, horn samples, and gritty sounding drums. His beats will sometimes sound as though they were being played from an old vinyl record. Much of this has to do with the fact that he samples many of his sounds straight off vinyl records, [http://youtube.com/watch?v=jQWxrWSsI2k as he mentions in this interview] .

Another trait of his, more so in the earlier part of his career, is the way he uses horn samples to supplement his grooves. With perhaps the most famous example being "" (on which he uses a horn sample from Tom Scott's "Today"), Rock has also used horns on several other productions such as "Straighten It Out", Public Enemy's "Shut 'Em Down", 's "What They Call Me", and A.D.O.R.'s "Let It All Hang Out".

Along with , The Roots and , Pete Rock played a large role in the fusing of jazz and funk music into Hip hop. The aforementioned "Reminisce..." withstanding, Rock used many jazz samples on his album "Mecca and The Soul Brother", such as 's "Country Preacher", for the song "Return of the Mecca", or "Capricorn" for the song "In The House" from "The Main Ingredient".

Pete Rock's heavy use of intro and outro beats has also been widely influential. To introduce feature songs, he often plays a short instrumental excerpt, completely different from the rest of the song. Aside from their role as transitions, these are widely regarded as a way of displaying his large collection and as a challenge to other hip-hop producers to identify the records that the breaks come from. [Making Beats: The Art of Sample-Based Hip Hop. p. 57 (Middletown, Connecticut: . ISBN 0-8195-6696-9)] "Mecca & the Soul Brother" and "The Main Ingredient" use intro/outro beats on nearly every track to great effect, and the tradition continues to the present on Rock's recent releases.

"Another Pete Rock remix" is Pete's trademark term, heard on countless singles which he has ed. Claims to have produced the original beat for 's "Juicy", and that it was recreated by and Poke (of Tone & Poke fame), without consent. However, he was invited to produce the remix, which utilizes the same sample as the original - 's "Juicyfruit".

Although he received no official producer credit, he made the original demo beat for 's "", which was recreated by Q-Tip.

He remixed Public Enemy's "Shut 'em Down" and "Nighttrain", in the same day, starting at 12pm and finishing at 12am.

Claims to have done several high profile remixes which remain unreleased including one of Madonna's "Secret".

Pete Rock has had a considerable impact on a number of producers who have emerged since the late 90s. Many critics have compared newcomers to him, sometimes favorably. Perhaps, most notable among these comparisons are the late producer , and 's , both of whom have worked with Rock during their careers. Many of the comparisons stem from the fact that these producers create the bulk of their productions out of samples, as well as the warm, mellow, and exuberant undertones apparent in their work. Pete Rock himself has added validation to the comparisons with J Dilla by stating "he's the only producer in this game that was just as serious [as me] ." [ [http://artofrhyme.com/interviews/artist/Pete-Rock/88/ ArtOfRhyme.com Interview with Pete Rock] ]

Other producers such as , and , have also found themselves compared to Pete Rock, with the latter approvingly referring to himself as "the new version of Pete Rock" on 's "Selfish". Pete Rock has acknowledged his relevance to these artists, releasing an instrumental record with 9th Wonder ("Class Is in Session"), and recording his own remix of West's "". Rock himself has named his main musical influences as being his close friend and soul legend .