Orphism or Orphic Cubism (1910-13), the term coined by the French poet Guillaume Apollinaire, was a little known art movement during the time of Cubism that focused on pure abstraction and bright colors influenced by Fauvism and the dye chemist Eugène Chevreul. This movement was pioneered by the Delaunays, a couple who relaunched the use of color during the monochromatic Cubist movement.[1] 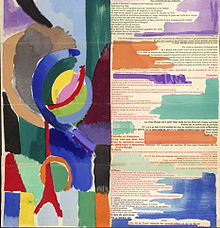 The Orphists were rooted in Cubism but moved toward a pure lyrical abstraction, seeing painting as the bringing together of a sensation of bright colors. This movement is seen as the key in the revolution of Cubism to Abstraction. More concerned with the expression and significance of sensation, this movement retained recognizable subjects but was absorbed by increasingly abstract structures. Orphism aimed to gradually dispense with recognizable subject matter and to rely on form and color alone to communicate meaning. The movement also aimed to express the ideals of Simultanism-the existence of an infinitude of interrelated states of being. [2] Pioneers in the movement, the Delaunays painted in response to Cubism, giving it their own spin.

Sonia Terk Delaunay and Robert Delaunay, a husband and wife duo, were the main painters of the Orphic movement. In their earlier works, their styles focused on Fauvist colors with some slight abstraction, which is particularly evident in Sonia's Finnish Girl of 1907 and Robert's Paysage au disque of 1906. The former painting relies heavily on bright colors and smooth form while the latter relies on color and choppy forms. Once they fell in love, however, their painting styles grew and evolved as they experimented with painting together.

Their works are defined by the bright colors, great abstraction, and use of simultaneous contrasting colors and views. In Robert's Eiffel Town Series, he portrays the tower in several views at once, like that of a Cubist painter. But instead of using the muted tones most Cubists did, he painted with bold, bright, contrasting colors. He often portrayed the tower with reds and pinks with cooler colors throughout. The more Robert painted the tower, the more abstract, fragmented and colorful it became.

In 1913 the Delaunays showed their works in the Salon des Indépendants and the Herbst Salon, the latter being the first Orphist Salon. It hosted mostly works by the Delaunays, as well as Picabia, Metzinger, Gleizes, Léger, and other Futurist painters. All of these painters were influenced by the Delaunays but didn't themselves call themselves Orphic painters; rather Apollinaire gave them the title of Orphic painters. Many artists were given the heading of Orphism but shied away from the elusive definition of the movement. The Delaunays were not only the pioneers in the movement, but they continued painting in this style throughout their lives.

The term Orphism was coined by Apollinaire, an art critic, in 1912, referring to the works of Sonia and Robert Delaunay. Their abstract Cubist works caught his eye. In Les Peintres cubistes he described Orphism as "the art of painting new totalities with elements that the artist does not take from visual reality, but creates entirely by himself; he gives them a powerful reality. An Orphic painter's works should convey an untroubled aesthetic pleasure, but at the same time a meaningful structure and sublime significance. He suggests that what the Delaunays were doing was pure art.

Being accused of stealing the Mona Lisa in December 1912, Apollinaire stayed with the Delaunays. They became close friends and collaborated on many works. Apollinaire even wrote several texts discussing their work to promote the concept of Orphism. They remained close friends and worked together to promote Orphism until an argument broke out between Robert and Umberto Boccioni, a Futurist painter, about simultaneity and their friendship ended abruptly.

One of Robert's biggest influences, besides his wife, was the chemist Eugène Chevreul. Most famous for discovering margarine, Chevreul delved in dye chemistry as well as the aesthetics of simultaneous contrast of colors. He had three main ideas to his color theories: "when complementary colors are juxtaposed, each appears to be more intense than when seen in isolation" and "if there is a perceptible difference in dark-light value between the two colors, then the darker will appear to be even darker" as well as that "all colors present in the field of vision at the same time mutually modify one another in specific ways".

When Apollinaire had ditched the Delaunays and Orphism had lost its novelty as a new art form, the Delaunays continued painting in their personal shared style. They may not have always called their work Orphic, but the aesthetics and theories were the same. Robert continued painting while Sonia delved into other media, including fashion, interior and textile design, all within the realm of Orphism.