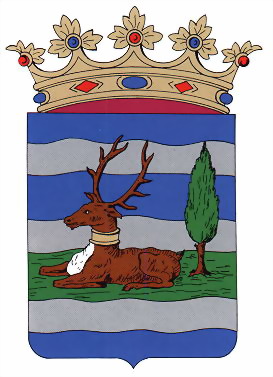 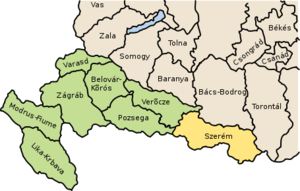 Syrmia (Croatian: "Srijem", Hungarian: "Szerém", Serbian: "Srem" or "Срем", Latin: "Syrmia" or "") was the name of an administrative county (comitatus) of the autonomous region within the historic . Its territory is currently in eastern and north-western . The name ("Srem" or "Srijem") is still used for the corresponding regions in Serbia and Croatia. The capital of the county was (Hungarian: "Vukovár" or "Valkóvár").

The territory of became part of the in the 12th century. By the 13th century, two counties were formed in this region: Syrmia (in the east) and Vukovar (in the west). The Syrmia county was taken by the in 1521 and the area became an Ottoman in 1544. The took one part of Syrmia from the Ottomans in 1688, while the other part was taken by Habsburgs in 1718. The entire region was incorporated into the , which was then extended from Western , where it stood in 1683, all the way to .

The Syrmia county was re-established in 1745. The county was included into the , a Habsburg province, which was part of both, the , and the . The Kingdom of Slavonia was mainly inhabited by Serbs and Croats.

After , the area of Syrmia County became part of the newly formed in 1918 and this was confirmed by the of 1920. The County of Syrmia was administrative division of the between 1918 and 1922, and then was transformed into the Province (Oblast) of Syrmia. After 1922, the county as such no longer existed.

"For the history of the region of in general, please see that article."

In the early 20th century, the subdivisions of Syrmia county were: