Turkish Cypriots (Turkish: Kıbrıs Türkleri or Kıbrıslı Türkler Greek: Τουρκοκύπριοι) are the ethnic Turks and members of the Turkish-speaking ethnolinguistic community of the Eastern Mediterranean island of Cyprus. The term is used to refer explicitly to the indigenous Turkish Cypriots, whose Ottoman Turkish forbears colonised the island in 1571. About 30,000 Turkish soldiers were given land once they settled in Cyprus,[15][16] which bequeathed a significant Turkish community; today's Turkish Cypriots.[17]

Ottoman troops landed in Cyprus in mid-May 1570 and conquered it within a year from Venetian rule.[18] The Turkish arrival to the island was welcomed by the Greek Cypriots as it was an improvement on Catholic domination and on the principle that anybody was better than the Venetians.[18][19][20] After the defeat of the Venetians in 1571, the Turkish commander, Lala Mustafa Paşa, chose 12,000 infantry and 4,000 cavalrymen to stay behind as colonists.[21] Furthermore, a substantial number of Turkish soldiers and their families from the Mediterranean region of Turkey, approximately 20,000, went to Cyprus and were given fiefs on the island. A fief was a parcel of real estate given by Sultan Selim II to his soldiers in return for their service to him.[16] By the late sixteenth century there was an estimated 40,000-60,000 Turks in Cyprus.[22]

Throughout the Ottoman rule, the demographic ratio between Christian "Greeks" and Muslim "Turks" fluctuated constantly.[23] By 1777-1788 the Turkish Muslim (and some Greek Muslim) population constituted the majority on the island, with 40,000 Muslim Turks and 37,000 Christian Greeks.[24] In 1788-1792 Turks were estimated at 45,000 compared to 40,000 Greeks.[24] However, by 1841, Turks made up 27% of the island's population.[25] The reason for this decline is because the Turkish community were obliged to serve in the Ottoman army for years, usually away from home, very often losing their lives in the endless wars of the Ottoman Empire.[26]

By 1878, during the Congress of Berlin, Cyprus was 'rented' to the British with the condition that Britain would come to the Ottoman Empire's aid in case of a Russian attack. However, in 1914, the Ottoman Empire established an alliance with Germany, Britain annexed Cyprus, and the island became a British colony.[27] At this time, Cyprus' Muslim inhabitants were asked to choose between adopting British nationality and retaining their Ottoman subject status; this resulted in 4,000-8,500 Muslim Turks choosing to leave the island and move to Turkey.[28] By July 1923, Turkey accepted that Cyprus had become a British territory under the Treaty of Lausanne and almost half of the Turkish community, approximately 15,000, immigrated to Turkey.[29] Furthermore, the Great Depression of 1929 brought economic depression to Cyprus with unemployment and low wages.[30] Thus, Turkish Cypriots started to immigrate in small numbers to the United Kingdom and the United States during the 1930s for economic reasons.[31]

In 1950 a referendum was held by the Greek Cypriots in which 95.7% of eligible Greek Cypriot voters cast their ballots in supporting a fight aimed at enosis, the union of Cyprus with Greece.[32] By 1955, the Greek Cypriot fight for enosis was led by an armed organisation called EOKA by Georgios Grivas which aimed at bringing down British rule and uniting the island of Cyprus with Greece. Turkish Cypriots had always reacted immediately against the objective of enosis; thus, the 1950s saw many Turkish Cypriots who were fleeing the EOKA.[33] By 1958, Turkish Cypriots set up their own armed group called TMT and by early 1958, the first wave of armed conflict between the two communities began, a few hundred Turkish Cypriots left their villages and quarters in the mixed towns and never returned.[34] 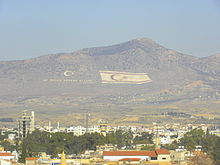 By 16 August 1960, the island of Cyprus became an independent state, the Republic of Cyprus, with power sharing between the two communities under the 1960 Zurich agreements, with Britain, Greece and Turkey as Guarantor Powers. Archbishop Makarios III was elected as president by the Greek Cypriots and Dr. Fazıl Küçük was elected as vice-president by the Turkish Cypriots. The two ethnic groups continued to pursue their separate objectives of enosis and taksim. In December 1963, in events known as Bloody Christmas (tr:Kanlı Noel),[35] Greek Cypriots initiated a military campaign against the Turkish Cypriots, after which intercommunal clashes continued until 1974.[36] Turkish Cypriots suffered heavier casualties and some 25,000 Turkish Cypriots became internally displaced, amounting to about a fourth of their population.[34][34][37] This resulted in an exodus of Turkish Cypriots, with the majority migrating to the United Kingdom while others went to Turkey, North America and Australia.[38]

With the rise to power of the Greek military junta in 1967, a group of right-wing Greek extremists supporting the union of Cyprus with Greece created an organisation called EOKA B and staged a coup in 1974.[39] This led to a military offensive by Turkey which used its right as one of the guarantor states and invaded the island.[34] After the Turkish invasion and the ensuing 1975 Vienna agreements, 60,000 Turkish Cypriots who lived in the south of the island fled to the north.[40] The 1974-1975 movement was strictly organised by the Provisional Turkish Administration who tried to preserve village communities intact.[34]

Thus, Cyprus was divided into two zones, separated by the green line, which was first established in 1964.[41] In the north, the Turkish Cypriots first declared the Turkish Federated State of Cyprus in 1975, and in 1983 they unilaterally declared the Turkish Republic of Northern Cyprus which has since remained internationally unrecognized except by Turkey.[40] In April 2004, a referendum of the Annan Plan to reunite the island was strongly approved by Turkish Cypriots (64.9% voting “yes”) whilst it was strongly rejected by the Greek Cypriots (75.8% voting “no”). 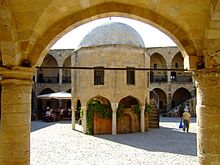 The historic Büyük Han which houses a mosque has become a thriving centre of Turkish Cypriot culture.

In the 300 years of Ottoman rule in Cyprus, the Turks built mostly religious buildings on the island. Hala Sultan Tekke near the salt lake in LarnakaRowan-moorhouse 2007, 186.</ref>[45]) and the Mevlevi Tekke in Nicosia are considered to be the most important two tekkes.[46]

The Cypriot Turkish dialect is relatively distinct from standard Turkish used in Turkey as it is more casual than the formal standard Turkish. The words (mainly verbs) have short, cut ends with some lengthy vowels at the end of each sentence. For example, instead of saying 'ne yapiyorsun?' (what are you doing?), the Cypriot dialect shortens this to 'napan?'.

However, since the establishment of the TRNC, mainland Turkish has become more influential; the influence of Turkish television has also contributed to this.

Folk music and dancing is an integral part of social life among Turkish Cypriots. Traditional Turkish Cypriot folk dances can be divided into 5 categories: Karsilamas, Sirtos, Zeybeks, Ciftetellis / Arabiyes, and Topical Dances (such as Orak, Kozan, Kartal and Topal). The folk dancing groups usually have performances during national festivals, weddings, Turkish nights at hotels and within tourism areas.

The northern areas of the island of Cyprus are administered by Turkish Cypriots. 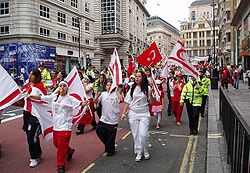 There is a strong Turkish Cypriot community living in London, United Kingdom.

There was significant Turkish Cypriot emigration from the island during the nineteenth and twentieth centuries, mainly to Great Britain, Australia, and Turkey. Emigration from Cyprus has mainly been for economical and political reasons. According to the TRNC Ministry of Foreign Affairs, in 2001, 500,000 Turkish Cypriots were living in Turkey; 200,000 in Great Britain; 40,000 in Australia; some 10,000 in North America; and 5,000 in other countries (mainly in Germany).[6]