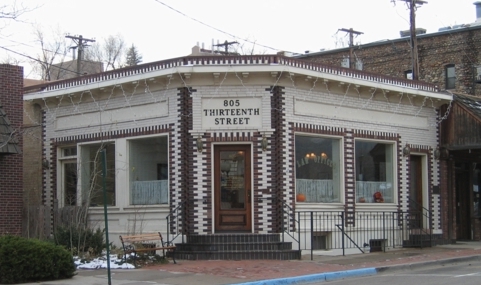 The Quaintance Block was the first storefront in historic downtown to be listed on the . Built in 1911, it is a one-of-a-kind architectural landmark combining Victorian and presaging modern styles, featuring unique experimental glazed bricks. It is also fondly remembered among locals as the Spudnut Shop.

The Quaintance Block was originally built in 1911 directly on the southeast corner of 13th Street and Washington Avenue, just to the east of its present location. Charles F. Quaintance, a son of pioneers, built this as his new building to house, in its three storefronts, his photo shop (13th Street storefront), Quaintance Realty & Investment Company (corner storefront), and the law office of his brother Arthur (Washington Avenue storefront). A highly astute businessman and promoter, Quaintance strategically located his building across from both of Golden's tramway depots on the opposite corners, luring passengers by advertising his Castle Rock Resort overlooking town. Here, eager patrons would get their photos taken with burros which would take them up the mountain, and while they were away, Quaintance developed their photos to be ready when the tourists returned. After the resort faded after the advent of the , Quaintance concentrated on other pursuits. In 1923, Quaintance moved the building 65 feet west to make way for downtown's first stand-alone service station (a ) on the corner, arranging for his building to face upon a courtyard and shifting his rooftop billboard east. Upon his death in 1940 his father Brough, took over the business until he died in 1946, upon which the investment company ceased operation. The building was sold to Ernie Waters, who converted it into the Golden Furniture Store, later owned by Cliff Evans. After Evans consolidated it with another furniture store he purchased on Washington Avenue, Leonard and Pat Dunn opened the here in 1953. Quickly becoming beloved among Goldenites, it was a shop of the national chain which sold, from Alaska to Mexico, delicious donuts made from potato flour ("spud"nuts). Customers often bought them at the shop, while Dunn also sent out delivery boys carrying baskets of Spudnuts, whom he called his "little businessmen". Later owned by Eleanor Laseman, the shop closed when its space was annexed by neighboring Jeffco Blueprints office supply store in 1984. After this closed, the building was faithfully restored to its original appearance in 1990 under direction of Conrad and Ingrid Gardner. Owned by the couple, it houses the Gardner law office and other tenants. The Quaintance Block was designated a Golden and Colorado landmark in 1993, and was listed on the in 1994. It is one of the rare moved buildings to have achieved such high designation, in recognition of its architecture.

The unique design of the Quaintance Block has long defied simple explanation and has fascinated the preservation community for years. It is made of experimental glazed bricks from the United States Glazed Brick & Pottery works, which operated during the 1910s on far West 8th Street in Golden. It is one of only three known remaining buildings using these bricks (including the Maas Residence at 423 10th Street in Golden and Union Station in downtown Denver), which were renowned in their time for their beauty and would not crack or craze. In overall design, the storefront is premodernist but features a pressed metal cornice looking back on earlier times, even ancient times with its Greek styling. However, its predominantly white walls and geometry look forward to art nouveau and modernist design, while its brickwork quoins complete the unusual design. The Quaintance Block was designed and constructed by architect James H. Gow, locally raised and educated at college.