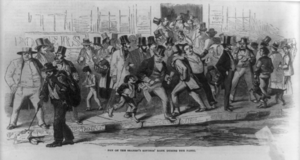 The Panic of 1857 was a financial panic in the United States caused by the declining international economy and over-expansion of the domestic economy. Indeed, because of the interconnectedness of the world economy by the time of the 1850s, the financial crisis which began in the autumn of 1857 was the world's first world-wide economic crisis.[1] In Britain, the Palmerston government circumvented the requirements of the Peel Banking Act of 1844 which required gold and silver reserves to back up the amount of money in circulation. This circumvention set off the Panic in Britain.[2] Beginning in September 1857, the financial downturn did not last long; however, a proper recovery was not seen until the American Civil War.[3] After the failure of Ohio Life Insurance and Trust Company, the financial panic quickly spread as business began to fail, the railroad industry experienced financial declines and hundreds of workers were laid off.[4] Since the years immediately preceding the Panic of 1857 were prosperous, many banks, merchants, and farmers had seized the opportunity to take risks with their investments and as soon as market prices began to fall, they quickly began to experience the effects of financial panic.[3]

In the early 1850s, there was much economic prosperity in the United States. However, in the beginning of 1857, the European market for goods from western America began to decline, which caused western bankers and investors to become wary. Eastern banks became cautious with their loans to the west and some even refused to accept western currencies.[5] Prior to 1857, the railroad industry was booming due to vast migrations of people to the west, especially in Kansas. With the large influx of people moving, the railroads became a profitable industry and the banks seized the opportunity and began to provide railroad companies with large loans. However, by late summer, the value of western land fell and migration drastically slowed causing railroad securities to fall in value.[6] By the spring, “commercial credit had dried up, forcing already debt-ridden merchants of the West to curtail new purchases of inventory.”[5] As a result of limited purchasing in the west, merchants around the country began to see decreases in sales and profits.[5] The railroads “had created an interdependent national economy, and now an economic downturn in the West threatened …[an] economic crisis”.[5] Since many banks had financed the railroads and land being purchased, they began to feel the pressures of the falling railroad securities. The Illinois Central; Erie; Pittsburgh, Fort Wayne and Chicago; and Reading Railroad lines were all forced to shut down owing to the financial downturn. The Delaware, Lackawanna and Western and the Fond du Lac Railroad Companies were forced to declare bankruptcy.[5] The Boston and Worcester Railroad Company also experienced heavy financial difficulties. The employees were informed, in a memo written in late October 1857, “the receipts from Passengers and Freight have fallen of during [the] last month (as compared with the corresponding month of last year), over TWENTY THOUSAND DOLLARS, with very little prospect of any improvement during the coming winter”.[7] The company also announced that their workers would receive a “reduction in … pay of TEN PERCENT”.[7] In addition to the decreasing value of railroad securities, farmers began to foreclose on their mortgaged lands in the west, which put more financial pressure on banks.[5]

The tipping point to really set the Panic of 1857 in motion was the failure of Ohio Life Insurance and Trust Company on August 24. Ohio Life was an Ohio based bank with a second main office in New York City. The company had large mortgage holdings and was the liaison to other Ohio investment banks. Ohio Life failed due to fraudulent activities by the company’s management and its failure threatened the failure of other Ohio banks or even worse, a run on the banks.[6] According to an article printed in the New York Daily Times, Ohio Life Insurance and Trust Company’s “New York City and Cincinnati [branches were] suspended; with liabilities, it is said, of $7,000,000.”[8] Luckily, the banks connected to Ohio Life Insurance and Trust Company were reimbursed and “avoided suspending convertibility by credibly coinsuring one another against runs.”[9] The failure of Ohio Life brought attention to the financial state of the railroad industry and land markets, thereby causing the financial panic to become a more public issue.[6]

The prices of grain also decreased significantly and farmers of 1857 experienced a loss in revenue causing them into foreclose on recently purchased lands. Grain prices in 1855 had skyrocketed to $2.19 a bushel so farmers had begun to purchase land to increase their crop supply, which in turn would increase their profits. However, by 1858, grain prices dropped severely to $0.80 a bushel.[5] Many Midwest towns felt the pressures of the Panic. For example, the town of Keokuk, Iowa experienced financial strife due to the economic downturns of 1857.

A huge municipal debt magnified Keokuk’s problems. By 1858 the town owed $900,000, mostly on railroad bonds, while the value of its taxable property dropped by $5.5 million. Lots that brought $1,000 before the crash now could not be sold for $10. Hard-hit property owners were unable to pay their taxes, and thousands of properties slipped into tax delinquency.[5]

As a result of such price decreases, land sales declined vastly and westward expansion essentially halted until the Panic ended. Merchants and farmers both began to suffer for the investment risks they took when prices were high.[5]

The final event that led to the cause of the Panic of 1857 was the Supreme Court ruling in Dred Scott v. Sandford in March 1857. After Scott attempted to sue for his freedom, Chief Justice Roger Taney ruled that Dred Scott was not a citizen because he was an African American and therefore did not have the right to sue in court. The ruling also made the Missouri Compromise unconstitutional and it was clear that the decision would have a lasting impact.[5] Soon after the Dred Scott ruling, “the political struggle between ‘free soil’ and slavery in the territories” began.[10] The western territories were now opened to the option of slavery and it was quickly evident that this would have drastic financial and political effects. “Kansas land warrants and western railroad securities’ prices declined slightly just after the Dred Scott decision in early March.”[5] This fluctuation in railroad securities proved “that political news about future territories called the tune in the land and railroad securities markets”.[5] Shortly after the Dred Scott ruling, the Panic of 1857 began to escalate to its peak.

By 1859, the Panic began to level off and the economy had begun to stabilize. President James Buchanan, after announcing that the paper-money system seemed to be at the root cause of the Panic, decided to withdraw the usage of all bank notes under twenty dollars. He also “advised the State banks to break away from the banks [and urged] them to follow the example of the Federal Government.[11] He felt this would decrease the paper money supply to allow the species supply time to increase and reduce inflation rates. President Buchanan wanted the State banks to follow the Federal Government specifically with the Independent Treasury System. This system allowed the Federal Government to keep up with specie payments, which helped alleviate some financial stress that the bank suspensions had brought on.[5] In December of 1857, Buchanan revealed his new strategy of “reform not relief,” which focused on the idea that “the government sympathized but could do nothing to alleviate the suffering individuals.”[12] To avoid further financial panics, President Buchanan encouraged the United States Congress to pass a law to provide an immediate forfeit of a bank charter in the event that the bank suspended specie payments. He also asked state banks to keep one dollar in specie for every three issued as paper and discouraged federal or state bonds to be used as security on a bank note to avoid future inflation.[12] Additionally, the Tariff of 1857 was enacted. It was enacted as a revision of the Tariff of 1846, which had, been “slowly destroying…thousand[s] of industrial enterprises.”[13] The Tariff of 1857 lowered the tax on the items from the Tariff of 1846, yet the tax was still in “favor [of] the American industry” to help improve the economy.[5]

As a result of the Panic of 1857, the southern economy suffered little whereas the northern economy made a slow recovery. The area affected the most by the Panic was the Great Lakes region and the troubles of that region were “quickly passed to those enterprises in the East that depended upon western sales.”[14] In about a year, much of the economy in the north and the entire south recovered from the Panic.[15] Near the end of the Panic, in about 1859, tensions between the north and south regarding the issue of slavery were increasing. The Panic of 1857 encouraged the southern idea that the north needed the south to keep a stabilized economy and southern threats of secession were temporarily quelled. Southerners believed the Panic of 1857 made the north “more amenable to southern demands” which would help to keep slavery alive in the United States.[14]