Since the first M270s were delivered to the U.S. Army in 1983, the MLRS has been adopted by several NATO countries. Some 1,300 M270 systems have been manufactured in the United States and in Europe, along with more than 700,000 rockets. The production of the M270 ended in 2003, when a last batch was delivered to the Egyptian army.

The weapon can fire guided and unguided projectiles up to 42 km (26 mi). Firing ballistic missiles, (such as the U.S. Army Tactical Missile System—ATACMS), it can hit targets 300 km (190 mi) away; the warhead in such shots reaches an altitude of about 50 km (164,000 ft). The M270 can be used in shoot-and-scoot tactics, firing its rockets rapidly, then moving away to avoid counter-battery fire.

MLRS was developed jointly by the United Kingdom, United States, Germany, and France. It was developed from the older General Support Rocket System (GSRS). The M270 MLRS weapons system is collectively known as the M270 MLRS Self-propelled Loader/Launcher (SPLL). The SPLL is composed of 3 primary subsystems: the M269 Loader Launcher Module (LLM), which also houses the electronic Fire Control System, is mated to the M993 Carrier Vehicle. The M993 is a derivative of the Bradley Fighting Vehicle chassis.[1][2]

The rockets and ATACMS missiles are contained in interchangeable pods. Each pod contains six standard rockets or one guided ATACMS missile; the two types cannot be mixed. The LLM can hold two pods at a time, which are hand-loaded using an integrated winch system. All twelve rockets or two ATACMS missiles can be fired in under a minute. One launcher firing twelve rockets can completely blanket one square kilometer with submunitions. For this reason, the MLRS is sometimes referred to as the "Grid Square Removal Service"[3] (metric maps are usually divided up into 1 km grids). The U.S. Army is currently working on developing and fielding unitary (one large warhead instead of submunitions) rocket and ATACMS variants, as well as a guided rocket.

In 2006, MLRS was upgraded to fire guided rounds. Phase I testing of a guided unitary round (XM31) was completed on an accelerated schedule in March 2006. Due to an Urgent Need Statement the guided unitary round has already been fielded and used in action in Iraq.[4] Lockheed Martin also received a contract to convert existing M30 DPICM GMLRS rockets to the XM31 unitary variant.[5]

A German developmental artillery system, called the Artillery Gun Module, has used the MLRS chassis on its developmental vehicles.[6] 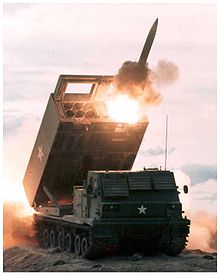 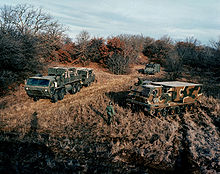 MLRS-System with launch vehicle, loader and a command center inside an APC

A Btry 6/27th FA was the first ground unit to fire in support of Operation Desert Storm, firing a missile at approximately 00:40 (12:40am) January 18. In early Feb 91 1/27th FA launched the biggest MLRS night fire mission in history.[7] It has since been used in numerous military engagements including the 2003 invasion of Iraq. In March 2007 the British Ministry of Defence decided to send a troop of MLRS to support ongoing operations in Afghanistan's southern province of Helmand; they will use newly developed guided munitions.

In 04/2011 the first modernized MLRS II and M31 GMLRS rocket were handed over to the German Army's Artillery School in Idar Oberstein. The German Army operates the M31 rocket up to a range of 90km.[8] 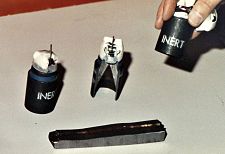 "Steel Rain" - M77 DPICM submunition of type used by MLRS M26 rocket. 644 M77s per rocket. The M77 was developed from the M483A1 that was developed for artillery shells.

The M270 system can fire MFOM, MLRS Family Of Munition rockets and artillery missiles, which are manufactured and used by a number of countries. These include:

US military operators refer to the M270 as "the commander's personal shotgun" or as "battlefield buckshot."[citation needed] It is also commonly referred to as the "Gypsy Wagon", because crews store additional equipment such as camouflage netting, cots, coolers, and personal items on top of the vehicle as the launcher itself lacks adequate storage space for the crew. Within the British military a common nickname is "Grid Square Removal System", a play on the initialism GSRS (from the older General Support Rocket System). With the adoption of the new M30 GPS guided rocket it is now being referred to as the "70 kilometer sniper rifle." [14] During the 1991 Gulf War, the Iraqis referred to the small M77 submunitions rockets as the "Steel Rain."