The Road to El Dorado

The Road to El Dorado 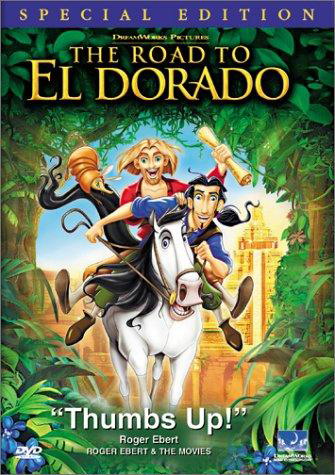 "The Road to El Dorado" is a 2000 animated comedy film by . The soundtrack features songs by and .

The movie begins in () (in the south of ) and tells about two men named Tulio and Miguel. During a game using , they win a map that purportedly shows the location of the legendary city of in the . However, their cheating is soon discovered and as a result, they end up as s on ' fleet to conquer . They are discovered, but manage to escape in a boat with Cortés' prize war horse and eventually discover the hidden city of El Dorado where they are mistaken for gods.

is portrayed as a civilization that combines facets of the s, Maya, s, and .

The creation of "The Road to El Dorado" was a challenge for the studio because had devoted most of its creative efforts to its previous animated film, "".

El Dorado's opening includes a song telling the of . According to the legend, El Dorado was built by two gods, 1000 years ago.

It then cuts to 1519 Spain, where is leaving with his troops for the New World. Miguel () and Tulio (), two wanted conmen, are nearby swindling sailors with . After the sailors run out of , one insists on a last bet, staking his map portraying El Dorado in the New World. Miguel wants the map and convinces Tulio to go for it. The sailor insists using his own dice. Surprisingly, Miguel and Tulio win; as Tulio is gathering his winnings, the loaded dice fall out of his vest and the sailors discover the con. Miguel and Tulio begin an improvisational argument where Tulio blames Miguel for giving him loaded dice, Miguel insisting that Tulio is the real thief. As their acting escalates, they grab swords and begin a which takes them to the top of a nearby building, at which point they jump down to the ground on the other side and effectively escape. An angry bull takes them by surprise; therefore Tulio and Miguel become the objects of a chase scene which ends at the docks, where they jump in barrels which are loaded onto Cortés' ship.

On the ship, they are discovered and mistaken for stowaways. Cortés will not tolerate stowaways and therefore has them locked in the brig. After failed attempts to break out, Tulio decides their best chance of escape is to steal a longboat and try rowing back to . But he is unable to come up with a plan by which to escape their cell. When a sailor drops an apple into the cell by accident, Miguel uses it to bribe Cortés' Altivo which is standing near by, to fetch a pry bar. The horse returns with the keys to the cell instead. In the night, the duo escape and load up a longboat, but as they lower themselves into the water Altivo neighs for the apple he was promised. Tulio tosses Altivo his apple, but it bounces off various objects and ends up in the , where the horse follows. Miguel attempts to save him; but the boat heels, spilling all of their supplies. After a storm and many famished days, they finally reach the shores of the .

Miguel, Tulio, and Altivo are overjoyed until they see s impaled on swords, prompting them to leave. While leaving, Miguel notices a rock having the shape of an and recognizes it as a landmark from the map he had won. He convinces Tulio to go to El Dorado, intending to loot it; therefore they begin their trip through the . After many small adventures, they wander onto the last part of the map, where they find only a rock on which is a picture carved depicting the legendary gods. Mistakenly thinking the rock is El Dorado, they begin to leave. Suddenly a woman, who is being chased by a group of tribal warriors for stealing a golden object, emerges from behind the rock and runs into them. The warriors and woman see Tulio and Miguel - who, mounted on Altivo, resemble the two gods carved in the rock - and take them through the watery tunnel passage into El Dorado.

There, some of the soldiers notify Chief Tannabok () and high priest Tzekel-Kan () of the new arrivals. Tulio and Miguel are led to a large courtyard where Tzekel-Kan addresses a crowd, telling them the gods have arrived. The pair realize that they have been mistaken for deities, and encourage the ruse. Chief Tannabok asks them why they have chosen now to arrive and Tzekel-Kan warns him not to question the gods. Miguel warns that he will unleash his power if they do, leading to Tzekel-Kan asking them to demonstrate their abilities. Taking Miguel aside, Tulio scolds him for pushing their luck and they begin to argue over how to get out of the situation. As Tulio gets angrier and talks faster, a near the city begins to erupt, coincidentally stopping when Tulio yells "stop!". The locals accept them as gods and they are taken to a temple, where they are offered a feast that night and a ceremony at dawn.

The pair begin celebrating that they have found this "whole city of suckers" and plan how to loot it. However the woman they saw being chased earlier overhears them. She introduces herself as Chel (), and says she wants to join the con, offering to help portray them as gods. The men are hesitant, but have little choice but to accept, as they do not know the s of the city. After she leaves, Tulio and Miguel agree that neither should attempt to her, as it would interrupt their plan. Afterwards they leave to join the feast.

The next day at dawn, when Tzekel-Kan offers a , they are quick to stop the killing, instead accepting the Chief's tribute of . Hoping to leave with the loot, they ask the Chief to build them a boat, but are told that the construction will require three s. Meanwhile, Cortés lands on the beach and begins to follow the pair's trail to El Dorado.

Worried that they will be unable to keep up the falsehood, Tulio tells Miguel to lie low, but Chel persuades him to explore the city so that she can seduce Tulio in his absence. Miguel has fun teaching the locals to play the , participating in the ceremony, playing and learning their version of a . Tzekel-Kan, unhappy that the gods are not as violent and destructive as he had foretold, goes to the temple to convince Tulio of the importance of human sacrifices. When Tulio hears that Miguel is playing with the locals, they both leave to find him. Upon finding Miguel, Tzekel-Kan arranges a much more serious . Pitting the duo against a team of bulky warriors. Tulio and Miguel barely manage to win, by using (even though it is against the rules) an as a ball. Again, Miguel objects to sacrificing the losing team, thus crossing Tzekel-Kan once more. But Tzekel-Kan, seeing seep from a small cut above Miguel's right eyebrow, realizes that Miguel and Tulio are mortals. While disclosing this information to his loyal servant, he cuts himself saying 'gods don't bleed'. The wound then immediatly heals, revealing Tzekel-Kan as a sorcerer.

Soon after, Tulio admits to Chel that he wants her to come back to Spain with him and Miguel, then revises his statement to that he want's her to come back with "him"; 'forget Miguel'. Miguel overhears this, and is infuriated. He decides that if Tulio doesn't want him around, he will stay in El Dorado. As the night's celebrations begin, Tzekel-Kan magically brings a gigantic stone statue of a to life and uses it as a weapon by having its actions correspond to his own. Miguel and Tulio are chased to the edge of a (where the failed human sacrifice was attempted earlier), and seemingly start to argue again just like in the beginning of the movie. In the diversion, the two manage to knock both priest and statue into the whirlpool. It quickly becomes apparent to both that this argument was actually very real; Tulio prepares to leave for Spain with Chel and Miguel begins to settle for his new life in the city of gold. Though nothing is said, it is obvious that the two friends are hurt to have to say goodbye to each other. Meanwhile, Tzekel-Kan, who somehow survived the whirlpool, is found by Cortés, whose appearance and behavior remind the priest of the bloodthirsty gods he desired to meet. Believing he has found the true gods, Tzekel-Kan begins to lead Cortés to El Dorado.

As Tulio and Chel board the boat, Altivo sees smoke rising over the horizon and warns Miguel. A scout returns to tell the Chief that Tzekel-Kan guides Cortés and his army towards the city. Miguel insists that the native warriors cannot fight the invaders; Tulio, by a stroke of luck, comes up with a plan to stop them. By carrying out the plan, they would cause the tunnel entrance to the city to cave in by smashing their boat into the pillars that support it. However before they can act, the boat's sail becomes stuck. Seeing that his friend is in danger, Miguel jumps onto the boat and opens the sail as he lands, thereby making a decision to come with Tulio rather than stay in the city forever. The three succeed in crashing the boat into the pillars and cut-off the city from the outside world. In the process however, they lose their ship and all the gold in it. Cortés approaches the entrance moments later, and when seeing no opening, he dismisses Tzekel-Kan as a liar and leaves, taking the priest with him, who is likely to be sold as a slave. Miguel and Tulio reconcile, and the three of them hop on Altivo (who is wearing golden horseshoes) to set off for the adventure they expect to be awaiting them.

* When Tzekel-Kan (the priest) is flipping through the pages of a spell book one of the illustrations resembles the logo of a boy sitting in the arc of a .
*The name of the that is seen throughout the film (and used in the game that Miguel and Tulio play) is Bibo. Bibo is actually the nickname of Eric Bergeron, the French director of the movie.
* The film is an homage to the classic "buddy" films of the 1940s starring and . Those films were always titled "The Road to..." (Morocco, Utopia, Zanzibar, etc.), involved two friends who accidentally find themselves en route to an exotic location, and a highly sexualized love interest (usually played by ). At one point in "The Road to El Dorado", the reflections of Tulio and Miguel in running water briefly form caricatures of Crosby and Hope.
* Originally in the script, the relationship between the main characters (Tulio and Miguel) was supposed to have more of an implication, with each calling the other by pet names like "darling." This would have heightened the tension when Chel came between them and when they argued about splitting up. The producers and other executives had the pet names and other references cut, but in some versions of the subtitles (which are often taken from original scripts), the pet names can still be seen.
*The giant whirlpool that the jaguar fell in at the end was a , or sacrificial inground well.
*, , and previously worked together, wrote songs and composed music for the 1994 movie, .
* and , along with the other voice cast, recorded their parts in 1998. One year later, the two would star alongside each other again in the film "".