A hernia is the protrusion[1] of an organ or the fascia of an organ through the wall of the cavity that normally contains it. A hiatal hernia occurs when the stomach protrudes into the mediastinum through the esophageal opening in the diaphragm.

By far the most common herniae develop in the abdomen, when a weakness in the abdominal wall evolves into a localized hole, or "defect", through which adipose tissue, or abdominal organs covered with peritoneum, may protrude. Another common hernia involves the spinal discs and causes sciatica.

Herniae may or may not present either with pain at the site, a visible or palpable lump, or in some cases by more vague symptoms resulting from pressure on an organ which has become "stuck" in the hernia, sometimes leading to organ dysfunction. Fatty tissue usually enters a hernia first, but it may be followed by or accompanied by an organ.

Most of the time, herniae develop when pressure in the compartment of the residing organ is increased, and the boundary is weak or weakened.

Symptoms may not be present in some inguinal hernias while in some other hernias, including inguinal, they are. Symptoms and signs vary depending on the type of hernia. In the case of reducible hernias, you can often see and feel a bulge in the groin or in another abdominal area. When standing, such bulge becomes more obvious. Besides the bulge, other symptoms include pain in the groin that may also include a heavy or dragging sensation, and in men, there is sometimes pain and swelling in the scrotum around the testicular area.[2]

Irreducible hernias or incarcerated hernias may be painful, but their most relevant symptom is that they cannot return to the abdominal cavity when pushed in. They may be chronic, although painless, and can lead to strangulation. Nausea, vomiting, or fever may occur in these cases due to bowel obstruction. Also, the hernia bulge in this case may turn red, purple or dark and pink.

Strangulated hernias are always painful and pain is followed by tenderness. Nausea and vomiting also may occur as well due to bowel obstruction. The patient may also experience fever.[3]

In the diagnosis of abdominal hernias, imaging is the principal means of detecting internal diaphragmatic and other nonpalpable or unsuspected hernias. Multidetector CT (MDCT) can show with precision the anatomic site of the hernia sac, the contents of the sac, and any complications. MDCT also offers clear detail of the abdominal wall allowing wall hernias to be identified accurately.[4]

Causes of hiatal hernia vary depending on each individual. Among the multiple causes, however, are the mechanical causes which include: improper heavy weight lifting, hard coughing bouts, sharp blows to the abdomen, tight clothing and incorrect posture.[5]

Furthermore, conditions that increase the pressure of the abdominal cavity may also cause hernias or worsen the existing ones. Some examples would be: obesity, straining during a bowel movement or urination, chronic lung disease, and also, fluid in the abdominal cavity.[6]

Also, if muscles are weakened due to poor nutrition, smoking, and overexertion, hernias are more likely to occur.

The physiological school of thought contends that the above mentioned are not the true causes of hernia, but are instead an (anatomical) symptom of the true (physiological) cause. Based on hundreds of observations during dissection, they have concluded that the risk of hernia is due to a physiological difference between patients who suffer hernia and those who do not, namely the presence of aponeurotic extensions from the transversus abdominis aponurotic arch. [7]

When a hernia is not repaired, it may become incarcerated or strangulated. When strangulation occurs, there is a danger that part of the intestine be caught in the hernia cutting off blood supply to the tissue. Also, when a bowel obstruction occurs, it leads to severe pain, vomiting, nausea and inability to have a bowel movement or pass gas. Men are more prone to suffer inguinal hernias than women, and they risk a damage to their testicles if a hernia becomes strangulated.[8] Also, the pressure caused on the hernia's surrounding tissues may extend into the scrotum causing pain and swelling. 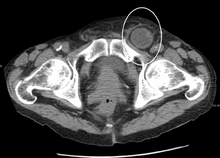 An incarcerated inguinal hernia as seen on CT

A sportman's hernia is a syndrome characterized by chronic groin pain in athletes and a dilated superficial ring of the inguinal canal, although a true hernia is not present.

Diagram of an indirect, scrotal inguinal hernia (median view from the left).

They involve protrusion of intraabdominal contents through a weakness at the site of passage of the umbilical cord through the abdominal wall. These hernias often resolve spontaneously. Umbilical hernias in adults are largely acquired, and are more frequent in obese or pregnant women. Abnormal decussation of fibers at the linea alba may contribute.

An incisional hernia occurs when the defect is the result of an incompletely healed surgical wound. When these occur in median laparotomy incisions in the linea alba, they are termed ventral hernias. These can be the most frustrating and difficult to treat, as the repair utilizes already attenuated tissue.

Diagram of a hiatus hernia (coronal section, viewed from the front).

Higher in the abdomen, an (internal) "diaphragmatic hernia" results when part of the stomach or intestine protrudes into the chest cavity through a defect in the diaphragm.

A hiatus hernia is a particular variant of this type, in which the normal passageway through which the esophagus meets the stomach (esophageal hiatus) serves as a functional "defect", allowing part of the stomach to (periodically) "herniate" into the chest. Hiatus hernias may be either "sliding," in which the gastroesophageal junction itself slides through the defect into the chest, or non-sliding (also known as para-esophageal), in which case the junction remains fixed while another portion of the stomach moves up through the defect. Non-sliding or para-esophageal hernias can be dangerous as they may allow the stomach to rotate and obstruct. Repair is usually advised.

A congenital diaphragmatic hernia is a distinct problem, occurring in up to 1 in 2000 births, and requiring pediatric surgery. Intestinal organs may herniate through several parts of the diaphragm, posterolateral (in Bochdalek's triangle, resulting in Bochdalek's hernia), or anteromedial-retrosternal (in the cleft of Larrey/Morgagni's foramen, resulting in Morgagni-Larrey hernia, or Morgagni's hernia).

Since many organs or parts of organs can herniate through many orifices, it is very difficult to give an exhaustive list of hernias, with all synonyms and eponyms. The above article deals mostly with "visceral hernias", where the herniating tissue arises within the abdominal cavity. Other hernia types and unusual types of visceral hernias are listed below, in alphabetical order:

Hernias can be classified according to their anatomical location:

Each of the above hernias may be characterized by several aspects:

If irreducible, hernias can develop several complications (hence, they can be complicated or uncomplicated):

It is generally advisable to repair hernias quickly in order to prevent complications such as organ dysfunction, gangrene and multiple organ dysfunction syndrome. Most abdominal hernias can be surgically repaired, and recovery rarely requires long-term changes in lifestyle. Time needed for recovery after treatment is greatly reduced if hernias are operated on laparoscopically, the minimally invasive operation most commonly used today.[10] Uncomplicated hernias are principally repaired by pushing back, or "reducing", the herniated tissue, and then mending the weakness in muscle tissue (an operation called herniorrhaphy). If complications have occurred, the surgeon will check the viability of the herniated organ, and resect it if necessary.

Modern muscle reinforcement techniques involve synthetic materials (a mesh prosthesis) that avoid over-stretching of already weakened tissue (as in older, but still useful methods). The mesh is placed either over the defect (anterior repair) or more preferably under the defect (posterior repair). At times staples are used to keep the mesh in place. These mesh repair methods are often called "Tension Free" repairs because, unlike older traditional methods, muscle is not pulled together under tension.

Evidence-based testing initially suggested that these Tension Free methods have the lowest percentage of recurrences and the fastest recovery period compared to older suture repair methods. However, prosthetic mesh usage seems to have a high incidence of infection with mesh usage becoming a study topic for the National Institutes of Health.[11]

One study attempted to identify the factors related to mesh infections and found that compromised immune systems (such as diabetes) was a factor.[12] Mesh has also become the subject of recalls and class action lawsuits.[13]

Laparoscopic surgery is also referred to as "minimally invasive" surgery, which requires one or more small incisions for the camera and instruments to be inserted, as opposed to traditional "open" or "microscopic" surgery, which requires an incision large enough for the surgeon's hands to be inserted into the patient. The term microscopic surgery refers to the magnifying devices used during open surgery.

Many patients are managed through day surgery centers, and are able to return to work within a week or two, while intensive activities are prohibited for a longer period. Patients who have their hernias repaired with mesh often recover in a number of days. Surgical complications have been estimated to be up to 10 percent, but most of them can be easily addressed. They include surgical site infections, nerve and blood vessel injuries, injury to nearby organs, and hernia recurrence.

Generally, the use of external devices to maintain reduction of the hernia without repairing the underlying defect (such as hernia trusses, trunks, belts, etc.), is not advised. Exceptions are uncomplicated incisional hernias that arise shortly after the operation (should only be operated after a few months), or inoperable patients.

Complications may arise post-operation, including rejection of the mesh that is used to repair the hernia. In the event of a mesh rejection, the mesh will very likely need to be removed. Mesh rejection can be detected by obvious, sometimes localised swelling and pain around the mesh area. Continuous discharge from the scar is likely for a while after the mesh has been removed.

An untreated hernia may be complicated by: