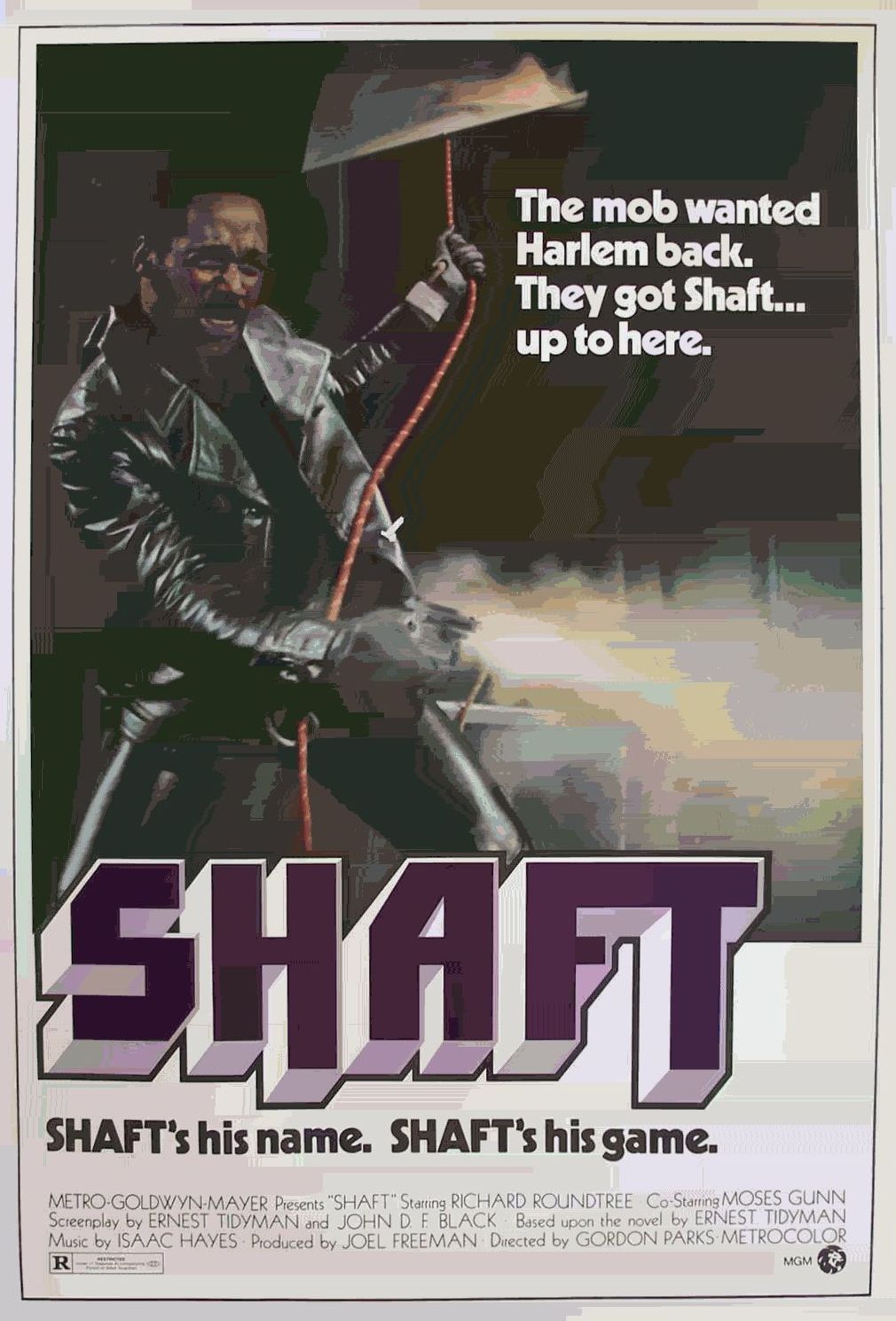 "Shaft" is a 1971 American film directed by and released by . An action film with elements of , "Shaft" tells the story of a black , , who travels through Harlem and to the Italian mob in order to find the missing daughter of a black mobster. It stars as Shaft, as Bumpy Jonas, as Lt. Vic Androzzi, as Ben Buford, and Gwenn Mitchell and in smaller roles. The movie was adapted by and from Tidyman's 1971 novel of the same name.

The movie is widely considered a prime example of the genre. The "Shaft" soundtrack album, recorded by , was also a success, with the "Theme from "Shaft"" winning the 1972 .

In 2000, "Shaft" was selected for preservation in the United States by the as being "culturally, historically, or aesthetically significant".

*The mob wanted Harlem back. They got Shaft...up to here.
*Shaft is his name. Shaft is his game.

The story begins with a shot of Shaft, a private detective, emerging from the subway, with shots characterizing 1970s New York. Shaft visits a shoeshine parlor, and is informed that some gangsters are looking for him. Police lieutenant Vic meets Shaft outside the parlor: he has heard of the gangsters and tries to get info on them, without success. After the lieutenant leaves, Shaft spots one of the men waiting for him in his office building. Shaft sneaks up on him, and forces this gangster into the elevator to his office, where another gangster is waiting. They get into a fight. One of the gangsters is thrown out the window; the other is interrogated. Bumpy, an uptown gang leader, wanted to meet Shaft - and the gangsters were prepared to knock out Shaft to do so.

The scene cuts to the police station where Vic and his superior are waiting. Shaft lies to the officers about the fight, claiming it was a friend who got into an accident. Shaft is reluctant to give any info. He is allowed to return to the streets for "the next 48 hours."

Shaft next arranges a meeting with Bumpy, the leader of these gangsters, in his office. Bumpy's daughter has been kidnapped, and Shaft is asked to get her back.

Shaft starts by looking for a man named Ben Buford, who is revealed to have been part of "the movement" with Shaft, years ago, and eventually finds out that Ben's group is holding a meeting. Shaft then returns home to his wife. The evening of the meeting, he runs into Vic at a stand, and is tailed by a fingerman to the meeting. Ben's other members, and the fingerman, are murdered by unknown assailants; Ben and Shaft quickly hide elsewhere in the building. Ben confronts Shaft, thinking he was set up, but they back off from a fight.

Shaft is told by Vic after the shooting that Shaft himself was the target, not Ben. Shaft is told that there are brewing tensions between the "uptown" hoods belonging to Bumpy Jonas and the "downtown" Mafioso, culminating with a couple of murders. Vic states that those who know, know its "hood against hood" on the inside, but the perception is black against white to the general public. He also show him some pics of two of the Mafioso guys that just got to New York. Vic pleads to Shaft to just clue him into whats going on (Vic already knew that Bumpy was looking for Shaft).

Shaft and Ben then meet Bumpy at his uptown office where Shaft ups the price for the job based on his new found info. Bumpy states that the reason for turning him on to Ben's is because Shaft is going to need an army to get his daughter back and "Ben's got one". After negotiations with Bumpy on a new price, they both leave his office.

Shaft retires to the "No Name Bar," across the street from Shaft's apartment in . In the bar, he notices two guys in the bar from the pictures that Vic showed him. Shaft takes over the bar from the bartender, calls the cops without them knowing, and breaks a bottle of over the head of one of the hoods when he spits in Shaft's face.

Shaft takes home one of the ladies from the bar and she spends the night with him. The next morning he visits Vic and the two guys from the previous evening sets up a rendezvous with them for later in the day. When he gets back home, he wakes the woman up and as she leaves his place, she says "you know you're great in the sack, but afterwards, you're kind of shitty..." Shaft asks her to close the door on the way out and she tells him to "close it yourself, shitty..."

Vic comes in and tells Shaft that the room that he was in at the station house was and has come to arrest him, if he was home. As Vic leaves, he sticks his head in the door and screams "close it yourself, shitty!", and howls with laughter. Shaft and Ben get back together and meet up with at Cafe Reggio's to go see Marcy Jonas to make sure she's alive. Once there a gunfight ensues where two hoods get killed and Shaft takes a bullet in the shoulder.

After getting medical attention for his bullet wound, Shaft tells Ben to round up his men and meet him at the hotel where Marcy is being held, to prepare to get her back. He also calls Bumpy to tell him that his daughter is fine and he is going to need some to meet him at the same hotel for the getaway.

Ben's men all dress as workers at the hotel (cooks, waiters, elevator operators, etc) as to not arouse suspicion. Shaft and one of Ben's guys go to the roof and get set up. Shaft's plan is to cause a distraction with an explosive thrown through the window of Marcy's room while Ben and his men come down the hall and deal with the Mafia men as they leave their rooms.

The plan is successful, they spirit Marcy out of the hotel into one of the waiting , as the others get away in the remaining cabs, while Shaft walks to a phonebooth to call Vic. Shaft tells him that "his case just busted wide open", to which Vic tells Shaft to close it for him. Shaft tells Vic that he won't and he says: "I guess you are gonna have to close it yourself...shitty!", and howls in laughter as the closing credits roll.

According to , the original production was of a white detective story, but after the success of "" (1971), the original script was scrapped in favor of an adaptation of 's 1970 novel "Shaft", which focused on an African-American detective. ["Baadasssss is back!", article on the Observer, available [http://film.guardian.co.uk/interview/interviewpages/0,,1499415,00.html here] ; last access .] Tidyman, who was white, was an editor at "" prior to becoming a novelist. He sold the movie rights to "Shaft" by showing the galley proofs to the studio (the novel had not yet been published). Tidyman was honored by the NAACP for his work on the "Shaft" movies and books.

The film was a surprising and runaway box-office success, grossing $12 million, with a budget of only $1,125,000. won an Academy Award for Best Music, Song for "". Hayes was also nominated for Best Music, Original Dramatic Score.

In 2000, a sequel was made featuring in the title role (see ). Jackson plays the nephew of 's character; Roundtree returns as John Shaft, still a private eye, trying to get his nephew to join him.

• On "", Shaft is Will's hero and several episodes make references to the film. In one episode Will denies that Shaft is a fictional character and claims he is real, parodying how young children deny that the cartoon characters they love are not real. Another episode includes a "Shaft"-themed wedding for Will and his fiancee, Lisa, in which Isaac Hayes guest-starred as a bishop about to wed the two. After Lisa and Will decide not to be married, Will comments, "Your Isaac Hayes impression stinks!"

In "", the princess of Genovia's best friend remarks to the royal bodyguard, "You know you look like Shaft," to which he replies, "I know."

In a "Simpsons" episode, Bart and Lisa sing Isaac Hayes' theme song to the film at a bar.