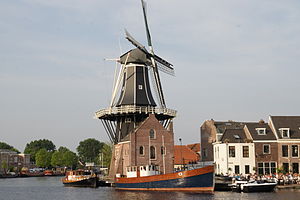 De Adriaan is a windmill in the Netherlands that burnt down in 1932 and was rebuilt in 2002. The original windmill dates from 1779 and the mill has been a distinctive part of the skyline of Haarlem for centuries.

De Adriaan was built on the foundations of the Goevrouwetoren, or Goede Vrouwtoren (Goodwife Tower), a tower that used to be part of the city's defences. The towers were located on the river Spaarne, on each side, and historically they were defending the city from possible attackers over the water. The Goevrouwetorenr was demolished in 1779 to make way for the windmill, as the towers were no longer useful for the defence of the city. The city border had moved to the north, and building on the foundations of the old tower would make it easy to build the windmill as high as possible, which would be efficient to catch wind. De Adriaan was officially opened on May 19, 1779.

The initiator of the building of the windmill was Adriaan de Booys, an industrial producer from Amsterdam. He bought the Goevrouwetoren and the land around it from the municipality of Haarlem on April 24, 1778. He had to increase the strength of the tower's foundations and added extra wooden supporting poles for his windmill. The new tower stuck out above the city: the highest point of the mill is about 34 metres above the water level in the river Spaarne.

De Booys was granted permission to build a windmill that would produce cement, paint, and tan. The latter is the bark of an oak (or other tree) that has been processed by the mill and can be used to tan hides. The windmill was built under supervision of miller Henricus Ruijsch from Waddinxveen. De Booy earned the concession to be the sole producer of cement in the city for 25 years.

The original owner, De Booys, sold the windmill to Cornelis Kraan in 1802. The monopoly on cement had not been as lucrative as De Booys had hoped for; a competitor evaded the law by importing cement from Dordrecht. The windmill was sold for 1650 guilders, and Kraan converted the mill into a tobacco mill, to produce tobacco snuff. Kraan already owned a tobacco shop, at the Grote Houtstraat (number 12).

In 1865 a steam engine was placed in the windmill by the new owner, J. van Berloo, to make it more competitive in the market. However, it was not efficient enough, and it was to be put down. Then in 1925 the windmill was bought by the Dutch windmill society Vereniging De Hollandsche Molen to prevent demolition. They paid 12,100 guilders for the mill.

In a storm in 1930 the mill was severely damaged.

On the evening of April 23, 1932 the windmill burnt down. The fire brigade arrived quickly but could not prevent the complete burning down of the mill. This event was a shock for many citizens of the city; the cause of the fire has never been established. 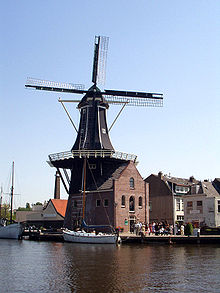 De Adriaan, used for a wedding

Immediately after the fire, citizens of Haarlem collected money to pay for the rebuilding of the mill. The owner of the mill, Vereniging De Hollande Molen, started a collection and the result was 3,000 guilders. The insurance money, 12.165 guilders, had to be used to pay off the mortgage on the mill.

The municipality of Haarlem made 10,000 guilders, a large amount of money, available in 1938 for the renovation of the mill, but this was overruled by the provincial council because of the bad economic situation. The renovation had to be postponed until the economical situation improved (1930s).

In 1963 the Haarlem municipality became owner of the mill and tried to restore it. That failed, however, due to a lack of funds.

In September 1985 a plan was presented by the architects Braaksma and Roos for renovation of the Scheepsmakersdijk; and their plan included a renovated windmill. In 1995 detailed plans were made by the Haarlem municipality and on April 21, 1999 the first pole was put in the ground.

De Adriaan was rebuilt on the original foundations of the old windmill. Windmill De Adriaan was reopened on April 23, 2002, exactly 70 years after the fire. The current owner is Stichting Molen De Adriaan.

The windmill is fully functional, and is capable of grinding grain. However, it is not often in use - it works for tourists, mostly on Saturdays and holidays. Inside the windmill is a small museum, and the interior can be seen.