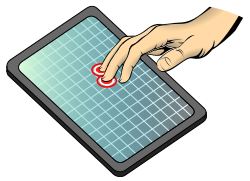 In computing, multi-touch refers to a touch sensing surface's (trackpad or touchscreen) ability to recognize the presence of two or more points of contact with the surface. This plural-point awareness is often used to implement advanced functionality such as pinch to zoom or activating predefined programs.

In an effort of disambiguation or marketing classification some companies further breakdown the various definitions of multi-touch. An example of this is 3M defining multi-touch as a touch-screen's ability to register three or more distinct positions.[1]

The use of touchscreen technology to control electronic devices pre-dates multi-touch technology and the personal computer. Early synthesizer and electronic instrument builders like Hugh Le Caine and Bob Moog experimented with using touch-sensitive capacitance sensors to control the sounds made by their instruments.[2] IBM began building the first touch screens in the late 1960s, and, in 1972, Control Data released the PLATO IV computer, a terminal used for educational purposes that employed single-touch points in a 16x16 array as its user interface. 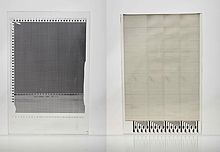 One of the early implementations of mutual capacitance touchscreen technology was developed at CERN in 1977[4][5] based on their capacitance touch screens developed in 1972 by Danish electronics engineer Bent Stumpe. This technology was used to develop a new type of human machine interface (HMI) for the control room of the Super Proton Synchrotron particle accelerator.

In a handwritten note dated 11 March 1972, Stumpe presented his proposed solution – a capacitative touch screen with a fixed number of programmable buttons presented on a display. The screen was to consist of a set of capacitors etched into a film of copper on a sheet of glass, each capacitor being constructed so that a nearby flat conductor, such as the surface of a finger, would increase the capacity by a significant amount. The capacitors were to consist of fine lines etched in copper on a sheet of glass – fine enough (80 μm) and sufficiently far apart (80 μm) to be invisible (CERN Courier April 1974 p117). In the final device, a simple lacquer coating prevented the fingers from actually touching the capacitors.

Multi-touch technology began in 1982, when the University of Toronto's Input Research Group developed the first human-input multi-touch system. The system used a frosted-glass panel with a camera placed behind the glass. When a finger or several fingers pressed on the glass, the camera would detect the action as one or more black spots on an otherwise white background, allowing it to be registered as an input. Since the size of a dot was dependent on pressure (how hard the person was pressing on the glass), the system was somewhat pressure-sensitive as well.[2]

In 1983, Bell Labs at Murray Hill published a comprehensive discussion of touch-screen based interfaces.[6] In 1984, Bell Labs engineered a touch screen that could change images with more than one hand. In 1985, the University of Toronto group including Bill Buxton developed a multi-touch tablet that used capacitance rather than bulky camera-based optical sensing systems.[2]

A breakthrough occurred in 1991, when Pierre Wellner published a paper on his multi-touch “Digital Desk”, which supported multi-finger and pinching motions.[7][8]

Various companies expanded upon these inventions in the beginning of the twenty-first century. The company Fingerworks developed various multi-touch technologies between 1999 and 2005, including Touchstream keyboards and the iGesture Pad. Several studies of this technology were published in the early 2000s by Alan Hedge, professor of human factors and ergonomics at Cornell University.[9][10][11] Apple acquired Fingerworks and its multi-touch technology in 2005. Mainstream exposure to multi-touch technology occurred in 2007 when the iPhone gained popularity, with Apple stating they 'invented multi touch' as part of the iPhone announcement,[12] however both the function and the term predate the announcement or patent requests, except for such area of application as capacitive mobile screens, which did not exist before Fingerworks/Apple's technology (Apple filed patents for in 2005-2007 and was awarded with in 2009-2010). Publication and demonstration using the term Multi-touch by Jefferson Y. Han in 2005 predates these,[13] but Apple did give multi-touch wider exposure through its association with their new product and were the first to introduce multi-touch on a mobile device.[14] Microsoft's table-top touch platform Microsoft Surface, which started development in 2001, interacts with both the users touch and their electronic devices. Similarly, in 2001, Mitsubishi Electric Research Laboratories (MERL) began development of a multi-touch, multi-user system called DiamondTouch, also based on capacitance but able to differentiate between multiple simultaneous users (or rather, the chairs in which each user is seated or the floorpad the user is standing on); the Diamondtouch became a commercial product in 2008.

Small-scale touch devices are rapidly becoming commonplace, with the number of touch screen telephones expected to increase from 200,000 shipped in 2006 to 21 million in 2012.[15]

A virtual keyboard on an iPad

Apple has manufactured numerous products using multi-touch technology; most prominently including its iPhone smartphone and iPad tablet. Additionally, Apple also holds several patents related to the implementation of multi-touch in user interfaces[16] Apple additionally attempted to register "Multi-touch" as a trademark in the United States — however its request was denied by the United States Patent and Trademark Office because it considered the term generic.[17]

Multi-touch sensing and processing occurs via an ASIC sensor that is attached to the touch surface. Usually, separate companies make the ASIC and screen that combine into a touch screen; conversely, a trackpad's surface and ASIC are usually manufactured by the same company. There have been large companies in recent years that have expanded into the growing multi-touch industry, with systems designed for everything from the casual user to multinational organizations.

It is now common for laptop manufacturers include multi-touch trackpads on their laptops, and tablet computers respond to touch input rather than traditional stylus input and it is supported by many recent operating systems.

A few companies are focusing on large-scale surface computing rather than personal electronics, either large multi-touch tables or wall surfaces. These systems are generally used by government organizations, museums, and companies as a means of information or exhibit display.

Multi-touch has been implemented in several different ways, depending on the size and type of interface. The most popular form are mobile devices, tablets, touchtables and walls. Both touchtables and touch walls project an image through acrylic or glass, and then back-light the image with LEDs.

The optical touch technology functions when a finger or an object touches the surface, causing the light to scatter, the reflection is caught with sensors or cameras that send the data to software which dictates response to the touch, depending on the type of reflection measured. Touch surfaces can also be made pressure-sensitive by the addition of a pressure-sensitive coating that flexes differently depending on how firmly it is pressed, altering the reflection.[18] Handheld technologies use a panel that carries an electrical charge. When a finger touches the screen, the touch disrupts the panel's electrical field. The disruption is registered and sent to the software, which then initiates a response to the gesture.[19]

In the past few years, several companies have released products that use multi-touch. In an attempt to make the expensive technology more accessible, hobbyists have also published methods of constructing DIY touchscreens.[20] 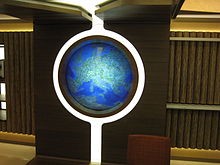 Popular culture has also portrayed potential uses of multi-touch technology in the future, including several installments of the Star Trek franchise.

The television series CSI: Miami introduced both surface and wall multi-touch displays in its sixth season. Another television series, NCIS: Los Angeles make use of multitouch surfaces and wall panels as an initiative to go digital. Another form of a multi-touch computer was seen in the film The Island, where the professor, played by Sean Bean, has a multi-touch desktop to organize files, based on an early version of Microsoft Surface[2]. Multitouch technology can also be seen in the James Bond film Quantum of Solace, where MI6 uses a touch interface to browse information about the criminal Dominic Greene.[21] In an episode of the television series The Simpsons, when Lisa Simpson travels to the underwater headquarters of Mapple to visit Steve Mobs, the erstwhile pretender to the throne of Mapple is shown to be performing multiple multi-touch hand gestures on a large touch wall.

A device similar to the Surface was seen in the 1982 film Tron. It took up an executive's entire desk and was used to communicate with the Master Control computer.

The interface used to control the alien ship in the movie District 9 features such similar technology.[22]

Microsoft's Surface was also used in the film The Day the Earth Stood Still.

In the film Minority Report, Tom Cruise uses a set of gloves that resemble a multi-touch interface to browse through information.[23]