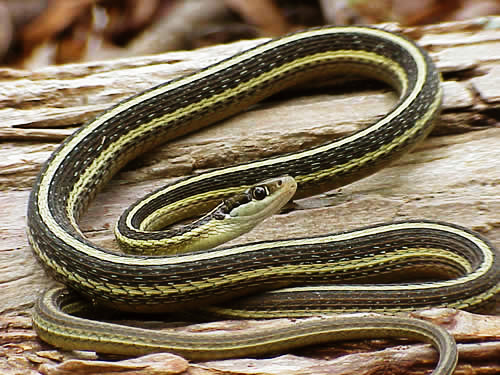 The Eastern Ribbon Snake ("Thamnophis sauritus sauritus") is a of found in the northeastern .

The Eastern Ribbon Snake gets its name from its very thin body. At maturity it can be anywhere from 18 to 86 cm in length. (Kingsbury 2007) It is a slender black snake with a yellow midback stripe and one on each side. A brown stripe that is 1-2 rows of scales extends onto the sides of the belly. The rest of the belly is a greenish white color. They also have two rows of black spots between the back and side stripes. It also has a long tail that is about a third of the length of its body.(Mayer 2003) The labial scales around the mouth of the snake are unmarked and uniformly bright yellow or white. A white or light yellow bar borders the front of their eyes. (Kingsbury 2007) Juveniles are colored like adults. (Towson University 2007)

The Eastern Ribbon Snake is typically found in the Northeastern United States and Southeastern Canada. You can usually find them in wetlands and near the edges of ponds and streams. (Kenney 2007) They are comfortable both in and out of water, they are adapted to both environments. When they are frightened they take to the water or bushes.They do not dive like water snakes, they glide across the surface of the water. (Buchanan 2007)

The only parts of known to have this reptile are Southern and Southwest . This passage from Northeastern Naturalists focuses on finding out more about the distribution, seasonal activity, movement patterns and over-wintering sites of the Eastern Ribbon Snake. There is very little information in about these topics. The entry in this book is an overview of an experiment that naturalists conducted in the Southwest part of in the , taking place from Mid-May to Mid-November 2001. They marked 105 snakes in the area, pin pointing the areas each snake was captured and marked by using a . The naturalists knew the background of the Eastern Ribbon Snake including that they are generally semi-aquatic, are found near water, and usually prey on . In order to do their study, the naturalists always had someone out in the field observing the snake as to what they ate and their living range. The experiment found that between late May and September the snakes were always found within five meters of water and lived in a five to ten square meter area. They also found that between September and mid October they would expand their range and were found as far as 173 meters away from a shoreline. From their experiment, they naturalists from discovered a lot more about the Eastern Ribbon Snakes in Southwestern . The most important conclusion they found was that with the low activity rate and activity range indicate that the lack of ability to expand the areas that they are found in puts these snakes in danger of local extinction. (Bell, Hermann, Wassersug pg. 279)

The Ribbon Snake generally eat small fish, tadpoles, salamanders, small frogs and toads, and occasionally insects. In some cases the female has been observed eating her young. The typical time for snakes to hunt is in the morning or early evening. Once the snake has spotted its prey, it will quickly slither to catch its prey and swallow it whole. (Ohio Department of Natural Resources 2006)

Reproduction and Care of the Young

Reproduction in Eastern Ribbon Snakes takes place after they emerge from hibernation in the spring time, in April or May. Mating occasionally takes place in the fall, but the female will delay fertilization and development until the next spring. The average gestation period is three months. They average number of young is around 12 but can range anywhere from 4-27. Females give birth in late summer or maybe even the early fall. After birth there is no parental care involved, the young are left to fend for themselves. Most young reach sexual maturity after two years, but most usually wait until the third year. (Towson University 2007)