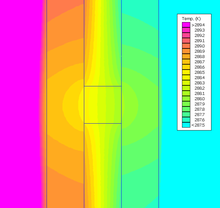 Temperature distribution in a thermal bridge

A thermal bridge, also called a cold bridge,[1] is a fundamental of heat transfer where a penetration of the insulation layer by a highly conductive or noninsulating material takes place in the separation between the interior (or conditioned space) and exterior environments of a building assembly (also known as the building enclosure, building envelope, or thermal envelope).[2]

Thermal bridging is created when materials that are poor thermal insulators come into contact, allowing heat to flow through the path of least thermal resistance (R-value or a materials effectiveness in resisting the conduction of heat) created, although nearby layers of material separated by airspace allow little heat transfer.[3]

Insulation around a bridge is of little help in preventing heat loss or gain due to thermal bridging; the bridging has to be eliminated, rebuilt with a reduced cross-section or with materials that have better insulating properties, or with a section of material with low thermal conductivity installed between metal components to retard the passage of heat through a wall or window assembly, called a thermal break.

Several properties of materials affect heat transfer. Examples include thermal conductivities, specific heats, material densities, fluid velocities, fluid viscosities, and surface reflectance and emittance characteristics. Thermal bridges are characterized by multi-dimensional heat transfer, and therefore they cannot be adequately approximated by the one-dimensional models of calculation typically used in norms and standards for the thermal performance of buildings (U-values). Surface moisture due to condensation, typically occurring in such regions as floor-wall connections and window installations, as well as mold growth in humid environments can also be effectively prevented by means of multi-dimensional evaluation during planning and detail design. 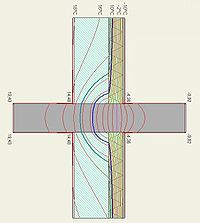 There are many different materials that are used for insulation, and new ones are often being created as the need for energy efficiency, sustainable design, and cheaper costs are currently what are driving new innovation. Currently, the types of insulation that are being used are:

One-dimensional analysis is based on simple, steady state, flow of heat, which means that heat is driven by a temperature differences that does not fluctuate so that heat flow is always in one direction. The product (kA) of thermal conductivity (k) and cross sectional area (A) of the heat flow path can be used in evaluating heat flow.