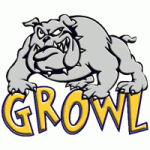 league =
conference = Eastern
division = Atlantic
founded = 2003
history = Philadelphia Growl
2003 - 2008 ()
2008 - present ()
arena =
city = Sewell,
media_affiliates = unknown
team_colors = , ,
colorbox|blue colorbox|yellow colorbox|white
owner = flagicon|USA
general_manager = flagicon|USA
head_coach = flagicon|USA
captain = flagicon|USA Sean Sullivan
minor_league_affiliates = (AIHL-Minor)
founders_cups = 2005, 2006
season_titles = 2006
conf_titles = 2006
division_titles = 2005, 2006, 2007, 2008The Philadelphia Growl are a professional team based in Voorhees, . They are members of the Atlantic Division of the Eastern Conference of the (AIHL). The team was founded in 2003 as one of four original expansion franchises of the (PIHA). The Growl were the first of these expansion teams to win the Founders Cup in 2005 and again in 2006. The Growl did not win the Cup since.

The "Philadelphia Growl" were founded as an expansion franchise of the (PIHA) in 2003.

Beginning play in 2003, the Philadelphia Growl made their debut on , , losing 16-4 on the road to the . The Growl made their home debut a week later at the in Feasterville, losing 10-8 to the . They won their first game 8 days later, defeating the Shockwave on the road, 10-8. Team owner was named the Growl's first captain and was the Growl's as well as the league's top scorer their first season with a total of 55 goals. With all teams grouped into one division, the Growl finished with a sub-.500 record and did not qualify for the playoffs.

Flynn was replaced by Mike Sanchez as team captain in the off-season. Led by Sanchez and the team-leading 29 goals tied by Fischer and , the Growl again struggled during their sophomore season by finishing one game under .500. Due to their sub-par regular season showing in 2004, they missed the playoffs for the second straight season. Not wanting his team to be outmatched again, owner Anthony Flynn acquired many already established players. Flynn soon after replaced as head coach, this eventually led to one of the most dominating teams to ever take the floor in the PIHA. The cornerstones of those teams were acquired when the Growl signed superstar veterans , , and . The team also acquired future superstar Sean Sullivan.

It was during the 2005 season that the Growl shed the mediocre expansion team label and became a force in the league and proved that the expansion teams could challenge the three-time defending champions' 's dynasty. Jim Vivona set Growl team records with 62 assists and 86 points in a season and the Growl recorded their first winning season reaching the top of the Delaware Valley Division with a record of 23-9, qualifying for the playoffs.

Come playoff time, the Growl swept the in two games in the semifinals as they advanced to the . Their opponent, the powerhouse dynasty of the took Game 1 by a score of 7-3. The Growl responded in game Game 2 by a dominating score of 13-3 to even the series. That set the stage for Game 3 in Lemoyne, . The Growl defeated the Typhoon 5-3 as the Growl brought the Founders Cup to somewhere other than York for the first time ever. Growl goaltender won the Walt Frazier Award as the Playoff MVP. The Growl won the PIHA Founders Cup in only their 3rd season of existence.

In 2006, Vivona topped his mark from the previous season by setting a team record for assists (64 in all). Second year sensation Sean Sullivan topped Growl team marks by setting records for goals (61) and points (92) on his way to winning the Joe Cook Award for league high scorer. The Growl as a team improved their record to 29-3, the best record in the league. The Growl easily swept the and were presented with the York Typhoon for a second straight year in the Eastern Conference finals. With the Typhoon not the power they once were, the Growl proceeded to sweep York as well three games to none, outscoring them 17-6 in three games.

Facing League MVP goaltender and the expansion in Colorado Springs, in the Founders Cup Finals, the Growl won the first game 6-0 despite missing , , and league high scorer due to travel delays. The Growl with a full roster again shut out the Littleton 4-0 in Game 2 taking a commanding two games to none lead. Facing elimination the Fire battled back with forward Brian Rogers scoring a goal in triple overtime to give Littleton the win 6-5, bringing the series to two games to one. In Game 4, the Growl responded to the disappointing overtime loss with a dominating 5-1 victory as the Growl repeated as Founders Cup Champions. A Growl goaltender repeated as the Playoff MVP, with winning the Walt Frazier Award.

Despite losing all-star to a hometown expansion team the , the Growl began the 2007 season with lofty expectations. Led by Sullivan's league leading 58 goals and D'Aloisio, who led the league with 25 wins and was named Scott Rupp Award winner for League MVP, the Growl finished 26-4-2 winning the Northeast Division and finishing with the second best record in the league. In the Northeast Division semifinals, the Growl were upset by former teammate Pinheiro and the two games to one ending the Growl's chance for a three-peat.

After the 2007 season, the Growl lost former league leading scorers Brian Fischer to the and Jim Vivona to retirement, as well as team captain Mike Sanchez being sent to the Growl's minor league team the , causing the Growl retool in the off-season. They acquired forward from the , defenseman from the , and 30-goal scorers from the and from the Feasterville Fury respectively. They also signed PIHA rookie to round out the team.

The Growl's 2008 season was lead by Gsell's team leading 28 goals and Sullivan's team leading 60 points. The Growl finished 28-4-0 winning the Atlantic Division. The Growl won their first six playoff games of 2008, sweeping the Fury in the Division Semifinals, the Grizzlies in the Division Finals, and the Lunatics in the Conference Semifinals all two games to none. This set the stage for a Growl-Blaze rematch in the Eastern Conference Finals against former Growl John Pinheiro once again. Led by Pinheiro's 10 goals, the Blaze took the series three games to two once again eliminating the Growl from the playoffs.

In the summer of , the Growl announced they would be leaving PIHA to join the newly founded (AIHL) for the 2008=09 season. The Growl also announced they will be moving from the Flyers Skate Zone in Voorhees, NJ to Sewell, to the .