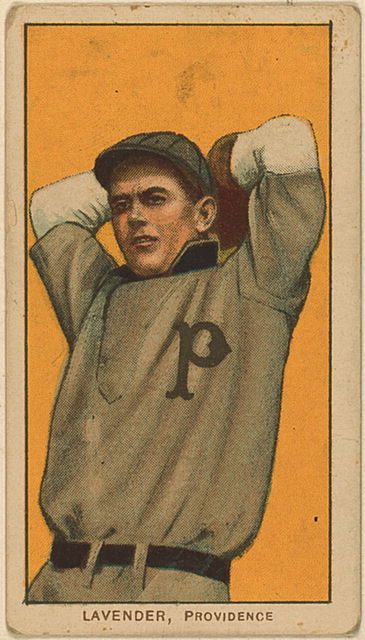 Lavender primarily threw the in his career and used it to win 16 games as a 28 year old rookie in 1912. He would not equal that success again, winning only 10 or 11 games in each of his last 4 seasons in Chicago.

On July 8, 1912, he started against the New York Giants having pitched 34 consecutive scoreless innings in his previous outings. He pitched a 5-hitter in defeating the Giants 7-2 and ended Rube Marquard's consecutive win streak at 19 games which, at the time, tied the record for the longest streak in baseball history.

Lavender threw a on , against the New York Giants and also threw a one-hitter against them on June 14, 1916, allowing only an infield single to .

Lavender was an inconsistent pitcher with the Cubs, never completing more than half his starts in any season. He was also typically among the leaders in allowing the most wild pitches, hit batsmen and home runs.

He was traded to the Phillies in 1917 and pitched one season for them with a 6-8 record before his career ended. His final career record was 63-76 with a 3.09 ERA in 1,207 innings pitched. Lavender may have been most valuable to his teams for his ability to be both a starter and reliever. His ability to fill both roles was important to the small pitching staffs of the .

In his latter years in the mid-1950s, Jimmy Lavender, known as 'Pops' to the local kids, rode his bicycle to a Chicago park where he hit fungos to aspiring youngsters. Many learned from him how to field hardballs.

Jimmy Lavender died in Cartersville, GA at the age of 75.