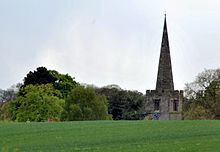 All Saints from the East

Cotgrave is a town in the borough of Rushcliffe, in Nottinghamshire, England, lying south east of Nottingham. With a relatively small population and an ancient heart that has largely escaped development Cotgrave has a village atmosphere. This is accented by its amenities and infrastructure that have remained comparatively underdeveloped even when the large estates were built around the village in the 1960s to house the population of workforce for the mine. Cotgrave now has a population of 7,373 people. It's sandwiched between the A52, A606, and A46. Nearby to the west is Tollerton and Nottingham Airport.

Its origins may be in the Iron Age but a 6th century Anglo Saxon burial ground has been excavated at Mill Hill to the north of the old village. There was certainly a Saxon church a century before the Norman invasion. The Roman road Fosse Way passes a mile to the East where it changes direction slightly. The name "Cotgrave" is possible derived from "Cotta" (anglo Saxon name) and "Grave", (grove or thicket). The present substantial church, All Saints, dates from the twelfth century with several alterations and additions. An arson attack in 1996 caused considerable damage but the church was since fully restored at great expense. The church enjoys a ring of eight bells, most made by Taylor's.[1] A team of ringers practice regularly (Fridays and Sundays). The plague visited the village in 1637 killing 93 of the 500 population. This horrendous loss to the village included 46 children. All Saints was used as a food store for the village during the outbreak. Money for the goods was disinfected as it was passed through a hollowed out stone filled with vinegar to the men who had locked themselves away in the church. The stone is still in the church.[2] On Scrimshire Lane, near the church, can be found an old wall, dubbed the "Thousand Year Wall". It is riddled with small holes made by, and providing a home for a large colony of stingless bees. Nearby, through a Lych Gate, is a graveyard that is, unusually, separated from the church by a road. There can be found a substantial war memorial, a pillar on three tiers commemorating those of the village lost in service during the world ware. The church, too, has a stained glass window by J.F. Gascoyne & Son of Nottingham dedicated in 1920 as a war memorial. 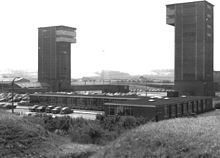 Cotgrave Coal Mine courtesy AM500

The town lies on the Grantham Canal, opened in 1797, but it did not grow until the discovery of coal in the area in about 1950. Smaller exploration for coal had been attempted for an hundred years but the Cotgrave colliery was established in the early 1960s with large numbers of miners & their families being relocated from other mining areas in England, especially the North East, to live on a large purpose built housing estate. Initially, in 1962, around 500 experienced mining workers, and their families, accepted the NCB incentive of tied new houses complete with furnishings to move from the area of the recently closed Radford Mine on the North West side of nearby Nottingham. This mine was near the site of what is now known as Bobber's Mill. Some four years later a similar scheme was introduced to attract miners from other worked out mines in the north east of England including Gateshead, It is interesting to note that, according to residents special meetings were arranged in the township so that workers already established could understand, for safety reasons, the dialect, and vice versa, of the newcomers.The population of the village rose from around 700 to over 5,000 within a few years. A rail track was extended from Nottingham over the river Trent past Ratcliffe on Trent to service the colliery. The koepe towers at the pit head were considered very modern and distinctive from more traditional pit head winding gear towers.[3] In a departure from traditional miners working conditions the face workers had extensive modern changing and shower facilities that meant they could leave as clean as they entered. The local economy was devastated with its closure in 1993/4 a move that left many former miners bitter as to their fate. Like most Nottinghamshire mines Cotgrave continued working through the NUM declared UK miners' strike (1984-1985) however the view by many was that this allegiance to the then Conservative government was betrayed. On its closure it is reported that the seams had millions of tons of coal reserves but it was poor quality.[4] Local residents, however, recount that the mine was shut because of geological faults, the encounter of a subterranean stream and subsequent flood problems, and the growing remoteness of the seam face from the shaft drastically increasing the cost of bringing the coal to the surface. The shafts were filled with concrete on closure and all associated buildings demolished.

The local economy has improved considerably as Cotgrave is surrounded by an affluent area with low unemployment. Many of the mine workers who hailed from the north east stayed in Cotgrave and built homes and families. 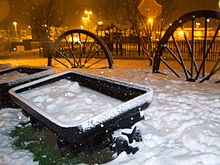 There is a small shopping parade called the precinct, built at the same time that the large housing estates were developed, with a Co-op, library, Fish and Chips shop, Chinese and Kebab take aways as well as other retailers and a medical centre. The Cof E church is All Saints,[5] on Plumtree Road and the village also has a Roman Catholic church, (Our Lady of Grace[6]) and a Methodist Chapel,[7] dating from 1802. Near the parish church (All Saints) is a small Sainsbury's Local store and adjacent to that is Grannie's Tea Rooms. Opposite the Cotgrave Welfare Club is the leisure centre. The centre has a large swimming pool, gymnasium and sports hall with playing fields. Cotgrave Welfare have a cricket and football team. There are two primary schools. The Cotgrave Candleby Lane School and the Cotgrave Church of England (Aided) Primary School. Nearby too is Cotgrave Futures with Sure Start and meeting facilities. There are two pubs; The Manvers, named for the Manvers Family that owned much land in the area, and the Rose and Crown towards the north of the village. A third pub, the Black Diamond, was a sixties built establishment which closed in 2006. It was demolished and replaced with housing. There are two well subscribed allotment areas in the settlement off Burrhill and Forest Close.

The extensive former mining area has been landscaped to form a country park. Here a long section of the canal has been partially restored including at least two locks. The canal is not presently navigable, however, as nearby road bridges have been removed, though in other areas of the Nottingham Grantham canal some bridges have been rebuilt to accommodate canal traffic.[8] Plans to put the canal back to water were gradually taking shape and, as a brownfield site in a rural area, the old pit head area would prove an ideal area for the building of a marina. This pit head area is cordoned off from public and there are plans for redevelopment which, (as of May 2010), are to be vigorously discussed by the people of Cotgrave. Plans to build around 470 houses on the site would impact the infrastructure of the nearby settlement of Cotgrave and the ongoing development of the young country park. Planted woodland is now beginning to mature and the country park is gradually acquiring a diverse population of wildlife. Wildfowl abound along with reports of cuckoos, warblers, swallows, little ringed plover, yellow wagtail, ring ouzel, wheatear, chiffchaff, dabchicks. Great crested newts are reported to be established in the lake and hares, rabbits, foxes, bats and owls are present. The lake, pictured, is well stocked and is used by anglers regularly. Fishing platforms have been built around the lake and reed beds established to protect the breeding waterfowl that include a variety of ducks, coots, swans and heron. The park has a picnic area, easily accessible car parks, a gallop for the benefit of horse riders and a well marked nature trail. This features woodland, lake and canal side walks as well as taking a route along the old rail track where a short portion of the original rails and sleepers have been left in place. A group "Friends of Cotgrave Country Park" works to maintain and improve the facilities at the park meeting regularly in Cotgrave. Details of how to become involved can be found at the Rushcliffe Council web site page dedicated to the Country Park mentioned in the links below.[9] Presently, end of 2010, the group is hoping to develop a "swimming pool" for dogs away from the vulnerable wildlife in the lake.

Ernest Hayes (British Army soldier), born 1898 in Gripps Cottage,Cotgrave. He went on to join the Kings Own Yorkshire Light Infantry in 1916, & was awarded the Military Medal 3 times for bravery at the Weston Front (France) in 1918. He died in Nottingham in 1938.

Frank Robinson (Xylophone Man) (1932-July 4, 2004) lived in Cotgrave and travelled to Nottingham daily where, around Lister Gate, he entertained passers-by on a child's 5 note glockenspiel. On his death hundreds of tributes were received from Nottingham's citizens.[10]