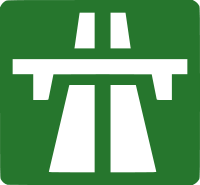 The Motorways of Pakistan are the nationally coordinated high-speed, limited-access or controlled-access highways in Pakistan, and maintained and operated by the National Highway Authority.

All motorways are either 6-lane or 4-lane roads, with the option of expanding to 6-lanes, as congestion increases over time.

As of August 2011, operational motorways in Pakistan had a combined length of 679.5 km with another 278 km were under construction. At least 1200 km of motorways are further planned over the next 10 years.

Pakistan's motorways are part of the "National Trade Corridor Project", which aims to link Pakistan's three Arabian Sea ports (Port of Karachi, Port Bin Qasim and Gwadar Port) to the rest of the country and further north with Afghanistan, Central Asia and China. 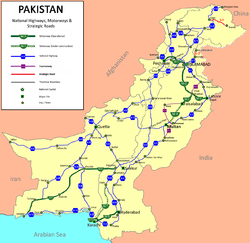 Roadmap of Motorways and National Highways of Pakistan 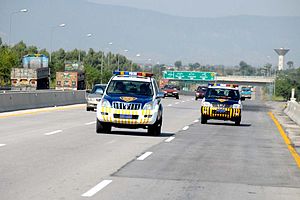 Pakistan's Motorways are patrolled by Pakistan's National Highways and Motorway Police (NH&MP), which is responsible for enforcement of traffic and safety laws, security and recovery on the Pakistan Motorway network. The NH&MP use SUVs, cars and heavy motorbikes for patrolling purposes and speed cameras for enforcing speed limits.

The M-1 and the M-2 motorways both include four emergency runway sections (2 on each motorway with 9,000 feet) for use by the Pakistan Air Force. The four emergency runway sections become operational by removing the removable concrete medians using forklifts. The Pakistan Air Force has used the M-2 as a runway twice, once in 2000 when it landed an F-7P fighter, a Super Mushak trainer and a C-130. The PAF again did this in 2010 to land, refuel and take-off a Mirage III and an F-7P, during its Highmark 2010 exercise. [2]