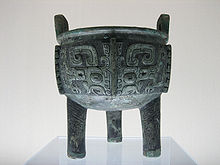 A ding from the late Shang Dynasty.

A ding (Chinese: 鼎; pinyin: dǐng; Wade–Giles: ting) is an ancient Chinese cauldron with legs, a lid and two handles opposite each other. They were made in two shapes with round vessels having three legs and rectangular ones four.

Dings were originally made of ceramic materials then later, at the time of the Shang Dynasty (1600-1046 BCE), cast in bronze. This is the period to which the oldest examples of dings date back. Inscriptions found on dings and zhongs are used to study bronzeware script. They were used for cooking, storage and the preparation of ritual offerings to ancestors.

In Chinese history and culture, possession of one or more ancient dings is often associated with power and dominion over the land. Therefore, the ding is often used as an implicit symbolism for power. The term "inquiring of the ding" (Chinese: 问鼎; pinyin: wèn dǐng) is often used interchangeably with the quest for power.

Perhaps the most famous ancient dings were the Nine Tripod Cauldrons. This set of bronze vessels is said to have been cast by King Yu of the Xia Dynasty when he divided his territory into the Jiuzhou or Nine Provinces.[1] Later on, possession of all nine was considered a sign of rightful authority over all.[2] The whereabouts of the nine ding are presently unknown, but are said to have been lost during the imperial Qin Dynasty (221-206 BCE), after having been passed among various royal dynasties and feudal states.[3]

The architecture of the Shanghai Museum is intended to resemble a bronze ding.