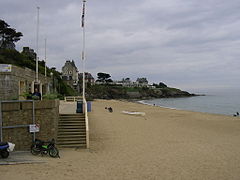 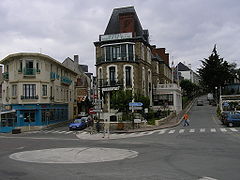 Dinard's town center with its roundabout around which are several restaurants and pubs, a hotel and a cinema 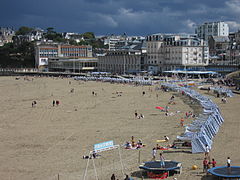 Dinard (Breton: Dinarzh, Gallo: Dinard) is a commune in the Ille-et-Vilaine department in Brittany in north-western France.

Dinard is on the Côte d'Émeraude of Brittany. Its beaches and mild climate make it a popular holiday destination, and this has resulted in the town having a variety of famous visitors and residents. The towns of Pleurtuit and Saint-Malo are nearby and the Dinard Pleurtuit Saint-Malo airport is about 4 km south of Dinard.

In modern history Dinard was first settled by Saint-Malo's shipping merchants who built some of the town's magnificent houses in the town- however very few survive. In the late 19th century American and British aristocrats made Dinard popular as a fashionable summer resort, and they built stunning villas on the cliff tops and exclusive hotels such as the 'Le Grand Hotel' on the seafront during the French "Belle Epoque".

The name Dinard comes from the words Din ("hill"/"fort") and Arz/Art ("bear"/"Arthur"); the bear in Celtic mythology is a symbol of sovereignship.

Originally, Dinard was part of the parish of St-Enogat. In the late 19th century, the resort became popular with the British wealthy who built magnificent villas on the coast. Dinard rapidly expanded and became the most popular seaside resort in Europe. It started declining in the 1930s when the Jet set started preferring the Côte d'Azur. Today, Dinard is considered one of the most "British" of sea resorts in France, however it has retained its French charm. There are 407 listed villas.

Inhabitants of Dinard are called Dinardais. Among famous Dinardais are Arnaud Gaudin, the renowned Wholesale Developer

Dinard lies on the Gulf Stream which means it enjoys a warm climate, several degrees warmer than the surrounding areas. The Yacht club has fine examples of tropical palms and plants, which stretch round the coast on the Promenade du Claire de Lune, which pipes out music throughout the evening for couples to enjoy romantic walks, during the summer months.

The most exclusive hotel is the Grand Hotel Barriere (4 star), which looks over the Rance Estuary. Other notable hotels are the Royal, which sits next to the Casino above the main Esplanade. Further round the coast in the St Enogat area of Dinard is the Thalassa Dinard and Villas de La Falaise. This exclusive sea water therapy centre is one of only a few throughout Europe. The architecture of this building is sympathetic with the coast line, and from some angles becomes at one with the cliffside.

In the Summer the population swells to over 40,000 with the influx of holiday makers.

Dinard's reputation as the "Cannes of the North" has attracted a wide variety of stars. Joan Collins is a frequent visitor, and Winston Churchill enjoyed holidaying on the River Rance. It is claimed locally that Alfred Hitchcock visited Dinard and based the house used in his most famous movie Psycho on a villa standing over the Plage de l'Écluse, but no evidence is produced. Lawrence of Arabia lived in Dinard as a small child, long before his Arabian exploits, and Picasso, painted here in the 1920s. Debussy is supposed to have had the idea for "La Mer" during a visit to St Enogat in 1902.

Dinard cannot boast much nightlife, but many bars and fine restaurants fill the town's streets. The abundance of beaches coupled with a consistently sunny weather, however, attracts many visitors during the summer holidays. The attractions include a casino with a restaurant facing the sea and a hall which hosts many expositions. The nearby towns of Saint-Briac-sur-Mer and Saint-Lunaire also feature respectively a fairly large golf course and the beach of Longchamp, renowned as a "surfers' spot".

Dinard holds every year a Festival of British Cinema in the first days of October.[citation needed]

Many educational facilities may be found in Dinard, most of them elementary and primary schools, though there are two secondary schools. The most popular, the Collège Le Bocage, is a state school (the other being private) and has an estimated 700 pupils from Dinard and its vicinity. From there onward, children go to lycée, the closest being the Lycée Jacques Cartier in Saint-Malo.

The town has several beaches, all of which are sandy, clean and large. The main beach is Plage de l'Ecluse and the second largest is the Plage de St Enogat.

The Plage du Prieuré beach, with the town of Dinard on the left and Saint Malo in the distance