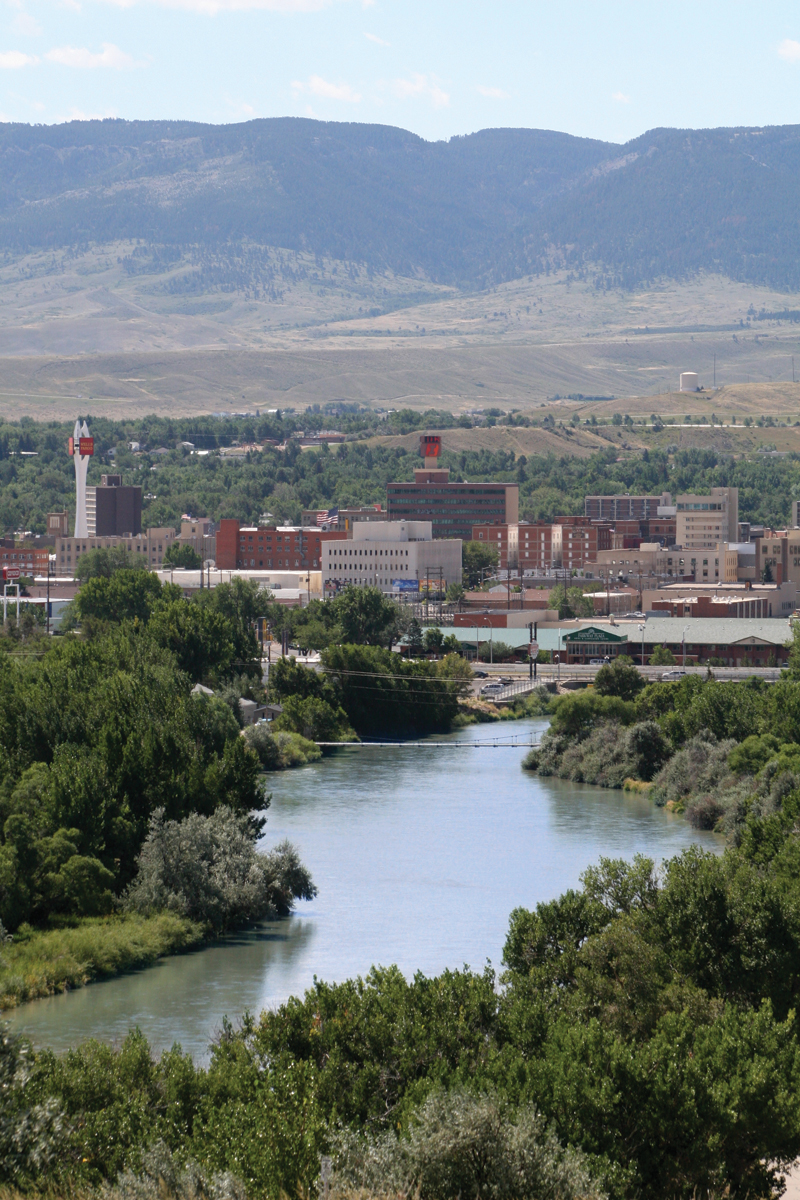 imagesize = 250px
image_caption = Overview of downtown Casper, looking south toward , with in foreground.

Casper is the only in and the of Natrona County, , ,GR|6 although the county is home to a number of small towns and Casper suburbs. With a population of 49,644, Casper is the second largest city in Wyoming, according to the 2000 census. During the early 1980s Casper was the largest city in Wyoming; according to U.S. Census figures for 1980, Casper had a population of 51,016 compared with Cheyenne's 47,283.

Casper is located in east-central Wyoming at the foot of , the north end of the , along the . approaches Casper from the North and East and is the main avenue of transportation to and from the city. The towns immediately adjacent to Casper are Mills, Evansville, Bar Nunn, and Mountain View. Unincorporated areas include Allendale, Dempsey Acres, Red Buttes, Indian Springs, and several others.

The city was established east of the former site of , which was built during the mid-19th century mass migration of land seekers along the Oregon, California and Mormon trails.

The government soon posted a military garrison nearby to protect telegraph and mail service. It was under the command of Lieutenant Colonel William O. Collins. attacks increased after the in Colorado in 1864, bringing more troops to the post, which was by now called Platte Bridge Station. In July 1865, Lieutenant Caspar Collins (the son of Colonel Collins) was killed near the post by a group of Indian warriors. Three months later the garrison was renamed Fort Caspar after Lieutenant Collins. In 1867, the troops were ordered to abandon Fort Caspar in favor of downstream on the North Platte along the .

The town of Casper itself was founded well after the fort had been closed. The city was founded by developers as an anticipated stopping point during railroad expansion; it was an early commercial rival to Bessemer and . The lack of a railhead doomed Bessemer in favor of Casper. Douglas, also a railhead, survives to the present day. The presence of a railhead made Casper the starting off point for the "invaders" in the . The special chartered train carrying the men up from Texas stopped at Casper.

Although relatively small by national standards, Casper is a regional center of banking and commerce.

Since the discovery of in the region during the 1890s, Casper became the regional petroleum industry center. Oil has figured prominently in its history from nearly the onset. Oil was first discovered in the famous in 1889, approximately 40 miles (64 km) north of Casper; the first refinery in Casper was built in 1895. The city has featured a refinery ever since, although various refineries have been built and closed over the years. As recently as the early 1980s, the city was near or home to three refineries. The surviving one is located nearby in Evansville, Wyoming. Development of Wyoming and fields in recent decades has helped Casper continue its role as a center in the energy industry.

The town was once significant in the Western sheep industry, although perhaps not to the same extent as some other regional cities. A meat packing plant was established in the neighboring city of Evansville in the 1930s and was closed in industrywide restructuring the 1970s.

The city has scheduled air service at , a former army air base built during World War II. The current airport, having been built for World War Two bombers, has large runways and replaced a prior regional airport north of Casper which later became Bar Nunn.

Casper and the rest of Wyoming are served by the "", a with statewide circulation. , a , is located in the city. The city is home to the , a drum and bugle corps in .