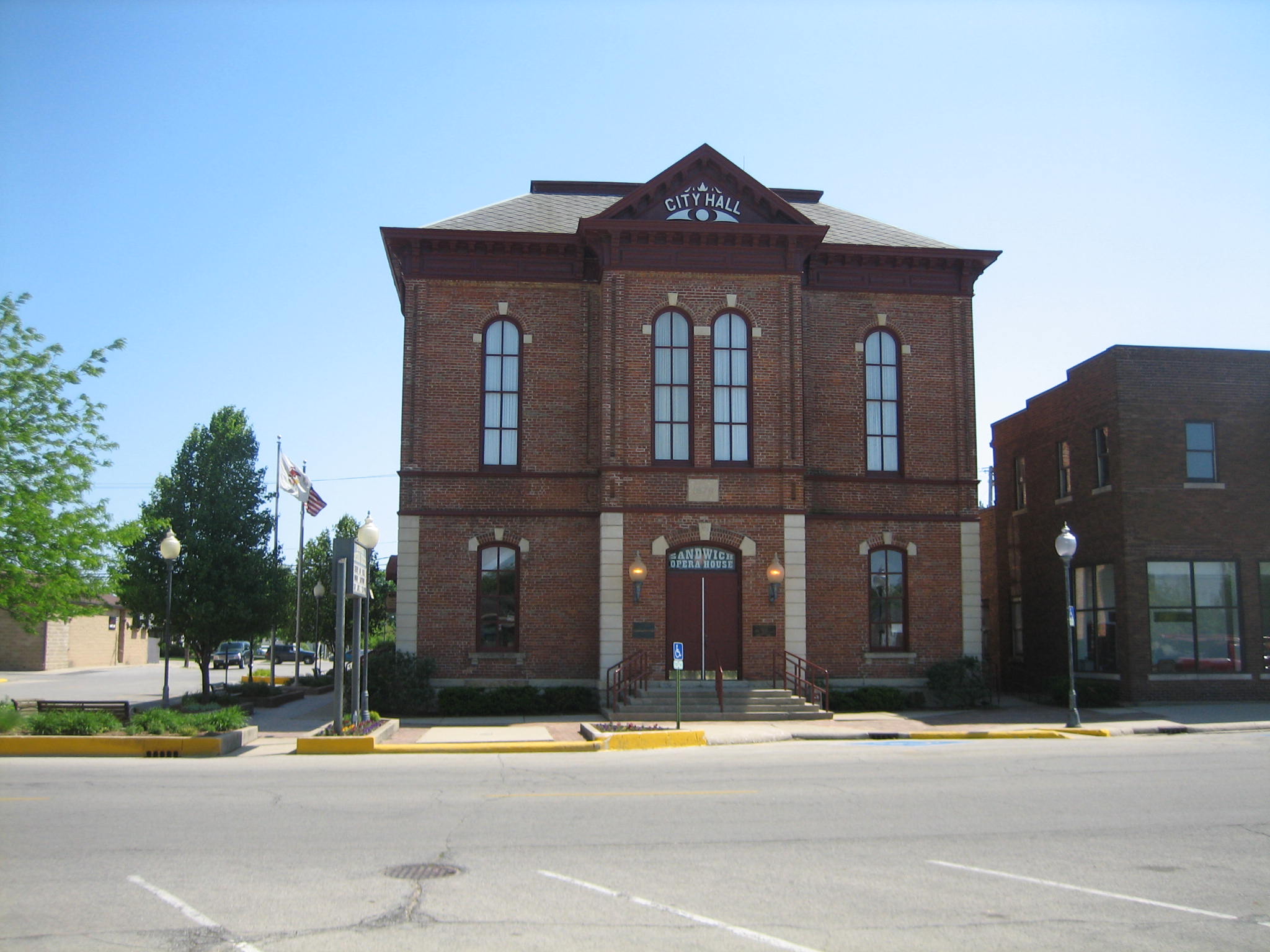 Sandwich City Hall was constructed in 1878. This building reflects the post-Civil War style, meant to evoke the spirit of the early years after a war that broke apart the purer architectural styles and mingled together in a mixture of revival styles. The construction was funded by a bond issue of $10,000 approved by the mayor and city aldermen in Sandwich. Eventually, a $2,000 cost overrun required additional bond issues. The city turned over the design of the structure to local s Enos and Israel Doan. The building was completed on schedule in January 1879. The finished product was 48 by 80 feet. The first floor had 12 foot ceilings while the second floor included a and 22 foot ceilings.

The building became a complete community center when it was completed. The first floor housed the 's office, the 's office, council room, visiting 's chambers, engine room and a 's office. The marshall's office had five jail cells. The upper floor of the building became the opera house. The opera house became an all-purpose theatre. It featured shows of all types, , , lectures, meetings, recitials, high school plays and graduations, church gatherings, firemen's ball and many other events. As other facilities became available to clientele the Opera House was left idle following . City government offices continued to function within building despite the dormant theater above.

A community group was responsible for Sandwich City Hall's placement on the National Register in 1979. A few years later in 1982 the group, the Association to Restore City Hall, was given tax-exempt status and received a grant of nearly $1.3 million from the Illinois Department of Commerce and Community Affairs in 1983. The grant covered 75% of restoration and construction costs and the restoration was completed in 1986.

The restoration also included an addition on the rear of the building. The addition provided for a community room on the first floor and on the second floor allowed for additional facilities for the opera house, including make up rooms and storage. Other areas to be restored and renovated included the s, the main entrance, the original on the west side of the building and a custom made stairway for the east are of the second floor was constructed.

The once dormant Opera House portion of the city hall building is once again fully operational. With city government still operating on the first floor the opera house has a full season. Sandwich City Hall's second floor has become home to performances, ensembles, student recitals, bluegrass performances, dance, by the Indian Valley Theatre, pop performances, and numerous other events. The facility is available for rent based upon scheduling.