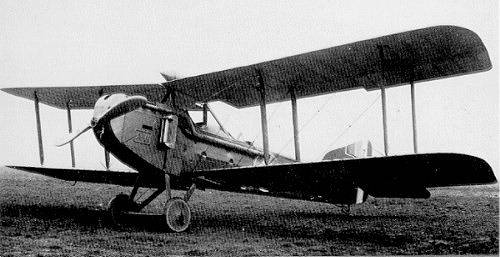 The aircraft (nicknamed the "Big Ack") was designed by Dutch aircraft designer as a replacement for the Royal Aircraft Factory B.E.2c and the . It was designed as a sturdier aircraft with a larger , and a reliable water-cooled motor. It was a rival design to the . The first aircraft flew in May 1916 and was delivered to the ' at . Although it was easier to fly than the R.E.8, and was sturdier, its performance was even more pedestrian, and it shared the inherent stability of the types. Nonetheless, a total of 1,650 were built, and the type served alongside the R.E.8 until the end of the war, at which point 694 F.K.8s remained on RAF charge. Late production examples were better streamlined – the original crude and large box s being replaced with tidier units (as in the illustration).

The type was unusual in having dual controls, enabling the observer to control the aircraft in the event of the pilot becoming incapacitated by enemy action. [Munson, Kenneth. "Aircraft of World War I". London: Ian Allan,1967. ISBN 0-7110-0356-4.

The F.K.8 served with several squadrons on operations in , Macedonia, and for home defence, proving more popular in service than its better known contemporary, the R.E.8. The first squadron was 35 Squadron. The F.K.8 was principally used for the corps role, but was also used for light bombing, being capable of carrying up to six 40 lb phosphorus smoke bombs, up to four 65 lb bombs or two 112 lb bombs on underwing racks.

With the R.E.8, the F.K.8 was scheduled to be replaced in the corps reconnaissance role by a version of the Bristol Fighter with a engine. Unfortunately the engine was unsatisfactory, and this version of the Bristol never saw service. Like the R.E.8, the F.K.8 was quickly discarded with the end of the war – the last squadron, , being disbanded at Kirec in Greece on 18 September 1919.

Eight aircraft were civil-registered after the war with two aircraft being used in by the Queensland and Northern Territory Aerial Services (later QANTAS, then Qantas Airways Ltd.).