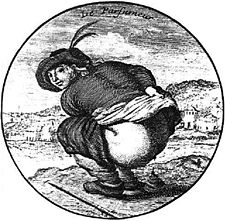 16th century drawing of a person defecating in squatting position outside 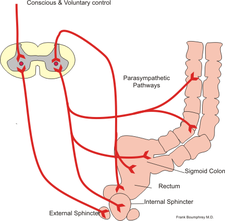 Defecation (from late Latin defecatio) is the final act of digestion by which organisms eliminate solid, semisolid or liquid waste material (feces) from the digestive tract via the anus. Waves of muscular contraction known as peristalsis in the walls of the colon move fecal matter through the digestive tract towards the rectum. Undigested food may also be expelled this way in the process called egestion.

If this urge is not acted upon, the material in the rectum is often returned to the colon by reverse peristalsis where more water is absorbed, thus temporarily reducing pressure and stretching within the rectum. The additional fecal material is stored in the colon until the next mass 'peristaltic' movement of the transverse and descending colon. If defecation is delayed for a prolonged period the fecal matter may harden and autolyze, resulting in constipation.

Defecation is normally assisted by taking a deep breath and trying to expel this air against a closed glottis (Valsalva maneuver). This contraction of expiratory chest muscles, diaphragm, abdominal wall muscles, and pelvic diaphragm exert pressure on the digestive tract.[citation needed]

During defecation, the thoracic blood pressure rises,[1] and as a reflex response the amount of blood pumped by the heart decreases. Death has been known to occur in cases where defecation causes the blood pressure to rise enough to cause the rupture of an aneurysm or to dislodge blood clots (see thrombosis). Also, in terminating the Valsalva maneuver, blood pressure falls; this, often coupled with standing up quickly to leave the toilet, results in a common incidence of fainting.

The loss of voluntary control of defecation is experienced frequently by those undergoing a terminal illness.[2] 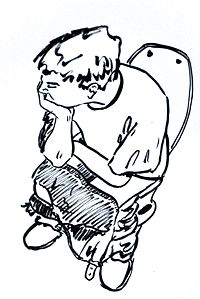 The positions and modalities of defecation are culture-dependent. The natural and instinctive method used by all primates, including humans for defecation, is the squatting position.[3] Squat toilets, sometimes referred to as 'natural-position toilets', are still used by the vast majority of the world, including most of Africa and Asia. The widespread use of seated-position toilets in the Western World is a recent development, beginning in the 19th century with the advent of indoor plumbing.[4]

Bockus in Gastroenterology, the standard textbook on the subject, states:

The ideal posture for defecation is the squatting position, with the thighs flexed upon the abdomen. In this way the capacity of the abdominal cavity is greatly diminished and intra-abdominal pressure increased, thus encouraging expulsion ...[5]

The anus and buttocks may be cleansed with toilet paper, similar paper products, or other absorbent material. In some cultures water is used (e.g. as with a bidet or lota) either in addition or exclusively. In Japan and South Korea, some toilets known as washlets are designed to wash and dry the anus of the user after defecation.