Orders, decorations, and medals of Burma

Orders, decorations, and medals of Burma

This article considers the military and civil orders, decorations and medals of Burma.

Order of the Star of the Revolution 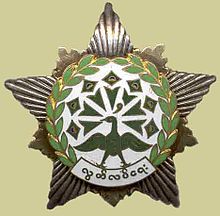 Order of the Star of the Revolution

This award was for participation in both military and civil struggles of Burma's independence. This award is granted for service in three different periods: 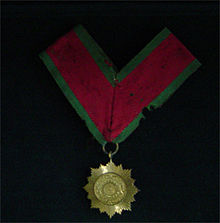 Instituted in 1948, the Aung San Thuriya medal is the highest recognition for valour and gallantry "in the face of the enemy" that can be awarded to members of the Myanmar Armed Forces of any ranks in any services. This is the highest military award in Myanmar and it is equivalent to British Victoria Cross and German Knight Cross of the Iron Cross.

The decoration is a one and half inch (3.8 cm) stainless steel stylized sun of sixteen rays. Suspended by an integral straight bar suspender. The name of the recipient name and year of award is engraved on the reverse and the sun was held by two ribbons.

To this day, there have only been 6 Aung San Thuriya medals has been awarded and only one of the recipient is civilian. The recipients are[1]: 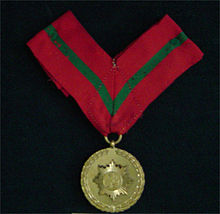 The decoration is a bronze stylized Burmese lion, with the name of the decoration written in Burmese "Thiha Thura" on the scroll below. The ribbon is 1.25 inches (32 mm), bright red with yellow edges or red with dark green centre stripes. 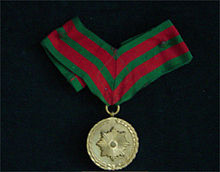 A silver depiction of a stylized rising sun with the central sun in red enamel. The ribbon is 32 mm, bright red with yellow edges and a yellow center stripe.

To date, a total of 517 Thura medals has been awarded.

In 2001, State Peace and Development Council added new categories of medals in the Medals for Outstanding Performance. They were:-

In December of 2009, State Peace and Development Council issued the new provision on honorary tiles and honorary medals. The following are the current 16 honorary titles and 22 honorary medals and classes are awarded:-