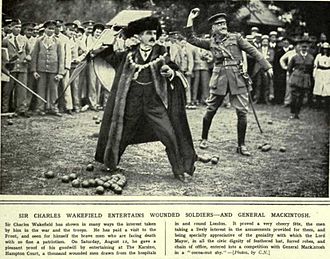 Wakefield was born in Liverpool, in 1859, the son of John Wakefield, and his wife Margaret, née Cheers, and was educated at the Liverpool Institute.

Wakefield patented the Wakefield lubricator for steam engines in the 1890s [1]. In 1899 he founded the Wakefield Oil Company, but subsequently changed its name to Castrol. The name Castrol was chosen because of the castor oil that was added to the company's lubricating oils. This title has since become a household name in the United Kingdom. The Castrol brand lubricants produced by Wakefield's company were used in the engines of motor cars, aeroplanes, and motorcycles.

A Castrol endorsement contract and the generous patronage of Wakefield provided the funds for Jean Batten to purchase the Percival Gull Six G-ADPR monoplane in which she set two world records for solo flight.[2]

Wakefield was an Alderman, a member of the Court of Common Council, Sheriff (1907), and for 1915-1916 Lord Mayor. He received a Knighthood for services to the City of London. He was involved with a huge number of City institutions and charities, and was a co-founder of the Wakefield Trust,[3] along with his friend the Rev'd "Tubby" Clayton, better known as the founder of the Toc H charity. He was raised to the peerage as Baron Wakefield, of Hythe in the County of Kent, in 1930, and in 1934 he was further honoured when he was made Viscount Wakefield, of Hythe in the County of Kent.

In his day, Wakefield was one of the most prominent and well-known characters in the town of Hythe, Kent, and the official Year Book of Hythe Town Council, in its list of Freemen of the Borough describes him as "Hythe's greatest benefactor".[4] He was created a Freeman of the Borough on 30 May 1930, under the provisions of the 1885 Honorary Freedom of the Boroughs Act. His name appears on many memorial inscriptions in Hythe today, and also lives on as the name of one of the town's masonic lodges.

It is often erroneously reported that Wakefield was commonly known by the nickname, or colloquial name, of "Cheers". Although he did prefer this name, it was in fact a given (baptismal) name, his middle name, having been the maiden name of his mother.