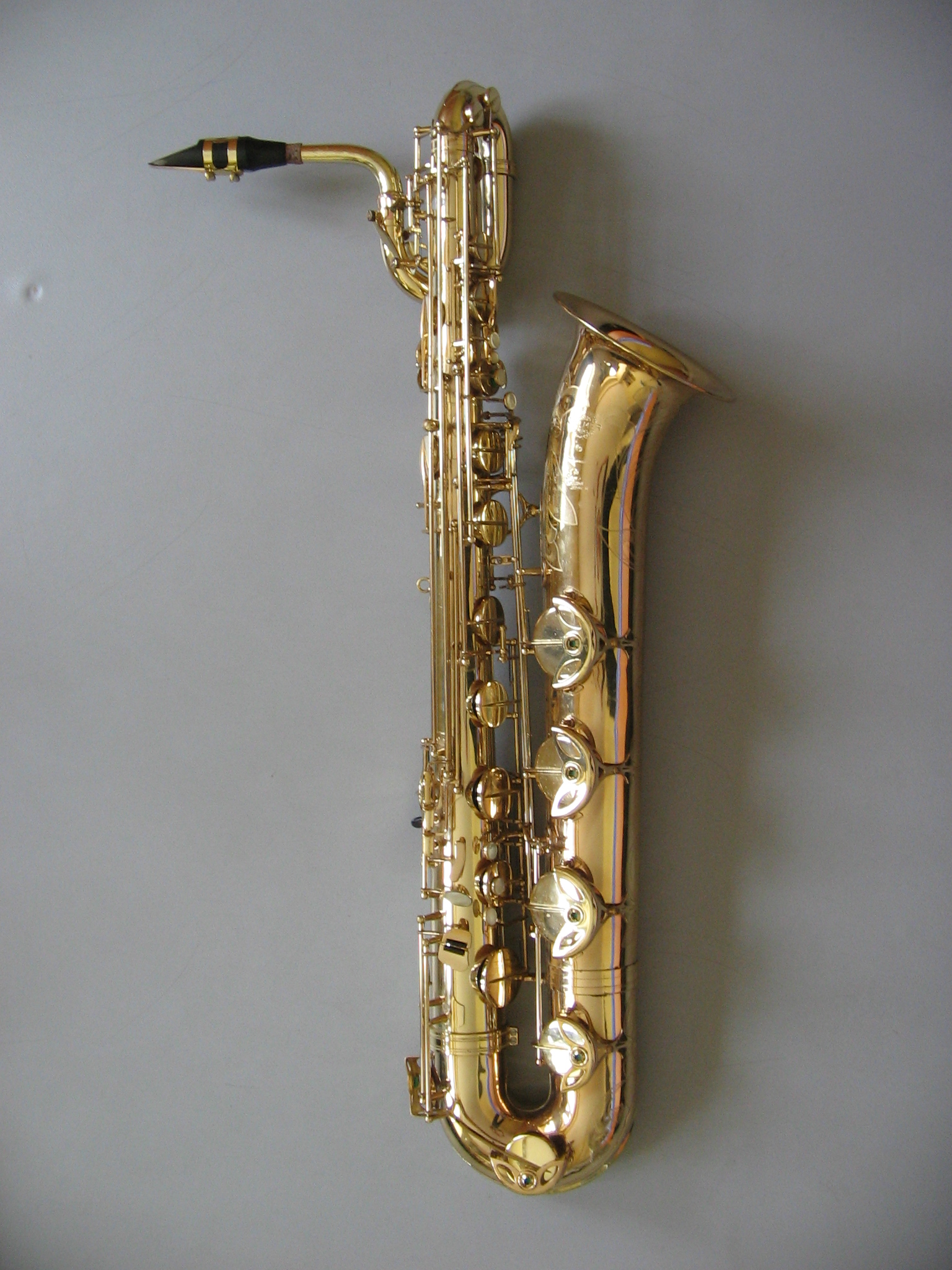 classification=
*Wind
*Woodwind
*
range= lower. Many models include the low A, a half step below the saxophone's normal lowest note, and some models have a key to facilitate the playing of the F# at the top of the range. Note: Through use of overtones, the saxophones high range can be extended.
related= family:
*
*
*
*
*
*
*
*----l family:
*
*Mezzo-soprano
*C soprano saxophone ----Other saxophones:
*
*
musicians=*
articles=*The baritone saxophone, often called "bari sax" (to avoid confusion with the , which is often referred to simply as "baritone"), is one of the larger and lower pitched members of the family. It was invented by . The baritone is distinguished from smaller sizes of saxophone by the extra loop near its mouthpiece; this helps to keep the instrument at a practical height (the rarer has a similar, but larger loop).

The exceptional weight of the instrument (13-14 pounds or 6.5 kg), as compared to the other three commonly used sizes of saxophone, makes it difficult to use in marching bands. Baritone saxophone players in marching groups often use a special harness that distributes the weight of the instrument onto the player's back instead of around his or her neck, as is the conventional way of supporting the instrument. The baritone saxophone can still be used in a marching band with the standard neckstrap. Its reed size is notably large, twice that of an reed and noticeably larger than that used by the .

The fingerings for all of the instruments in the saxophone family are essentially the same and many players play more than one saxophone. The baritone saxophone, however, is the only member of the saxophone family which often possesses a "low A" key (sounding concert C, the same pitch as the lowest note on the ), whereas most other saxophones descend only to a fingered B music|b, though altos and basses have been manufactured with low A keys, and now makes a with one; (sounding pitch depending on the key of the particular instrument).

The baritone saxophone is used in classical music (particularly as a member of a ), but composers have rarely called for it in orchestral music. Examples include ' "", composed in 1902-03; 's "Wooden Prince" ballet music, ' "Symphony no. 4", composed in 1910-16, and Gershwin's "" and "". It has a comparatively small solo repertoire although an increasing number of concertos have appeared. Solo works with orchestral accompaniment include and Bill Holman's "Entente" (1966); concertos by (1973), (1992, for string orchestra), Benjamin Boone (2003), and (2008); 's "Celebration" for baritone saxophone and orchestra (1977); Robert Nelson's "Concertino" (1996); Herb Gellis' "Corduroy" (2002-03); jazz saxophonist Dale Fielder's "Light and Shadow" (2007, for chamber orchestra); and David Gaines' "and dispel the miseries of the world" (2008, for chamber orchestra). A recording of the Gaines composition will be released by Navona Records in 2009 with baritone saxophonist James DeJoie accompanied by the conducted by Kirk Trevor.

Baritone sax is an important part of military bands, concert bands, jazz bands, wind ensembles and is common in musical theater, especially those of the more "jazzy" type, e.g. "", "", "". In s, it often plays a part similar to that of the . The baritone player usually plays rather simple rhythms in order to maintain the musical pulse of the group. Often, this consists of quarter notes on beats one and three in 4/4 time.

The baritone plays a notable role in many hits of the 60s, and has often been heard in the horn sections of funk, blues, and soul bands. It is sometimes also used in rock music. For example, it is featured along with a tenor sax in "" by from the album "". often includes a baritone saxophone in concert performances of .

Prominent baritone saxophonists in contemporary American popular music include , [http://music.barnesandnoble.com/search/product.asp?EAN=724359451121&z=y] Dana Colley of Morphine and A.K.A.C.O.D., of , , of , and of . Linnell and Colley also play on occasion. Many saxophonists also play a baritone on occasion including , , , of , [http://www.galacticfunk.com/NEW2007/band/index.php?skin=2] and .Fact|date=February 2007

Although few classical saxophonists perform exclusively on the baritone saxophone, a number of jazz performers have used it as their primary instrument. The baritone is an important instrument in the , being the largest size of saxophone used in that ensemble (although the larger was occasionally used up to the 1940s). One of the instrument's pioneers was 's longtime baritone player, , who played both accompanying bass lines as well as exuberant solos and improvisations.

In big bands, the role of the baritone player usually involves doubling with the bass trombone, bass, or first alto saxophone but in some cases it has an independent part. (The saxophone section of a standard contains two altos, two tenors, and a baritone.) The baritone player is usually expected to double on .

Since the mid-1950s, master baritone saxophone soloists such as , , Cecil Payne, and achieved fame, and was the first player of the instrument to achieve fame as a soloist. In the 1970s, a jazz band called the Baritone Saxophone Retinue consisted of between six and ten baritone saxophones, backed up by a rhythm section. A similar group, the International Baritone Conspiracy, which featured six baritones, was formed in the 1990s.

More recent notable performers include Ken Ponticelli, (who has also led a group of baritone players), , , James Carter, of the band "",, , , , Frank Vacin and Claire Daly. In the avant-garde scene, and have doubled on bari. A Noted Scottish performer is , who has appeared with as well as with the . Atsushi Yanaka, the baritone saxophonist of the Japanese group , is widely regarded as the best baritone saxophone player in music.Fact|date=March 2007 The Baritone Saxophone Band, a tribute to Gerry Mulligan, featured three baritone saxophonists: Ronnie Cuber, Gary Smulyan, and Nick Brignola. [http://youtube.com/watch?v=oHvFcVMBh1w video]

The bari sax has become a more commonly seen instrument in and bands including , , , and . The sax is popular for its lower register notes, however, the size and bulk of the instrument, along with the cost, can prevent many bands from using it.