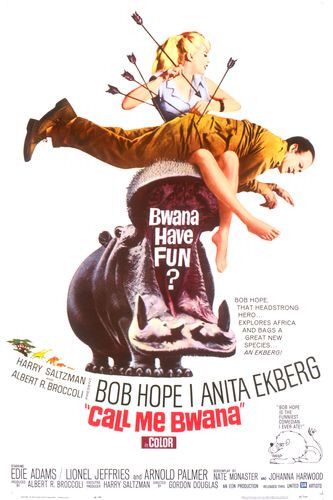 "Call Me Bwana" is a 1963 film starring and , and directed by Gordon Douglas. It is largely set in . It is the only film made by which is not about the character, and was made by most of the same film crew as "".

plays a New York writer who has passed off his uncle's memoirs of explorations in Africa as his own. Hope lives his false reputation as a to the point of living in a furnished to look like an African lodge complete with records of African . Based on his false reputation as an "Africa Expert", he is recruited by the and to locate a missing secret space probe before it can be located by hostile forces.

Hope's co-stars include and playing . Golfer makes a brief cameo, playing a crazy round of golf with Hope&mdash;a scene revisited in the film "" where Hope makes a cameo appearance and plays golf through a tent. A scene involving an unseen President in his famous rocking chair is parodied with his Russian counterpart rocking in a chair that squeaks loudly.

*An advertisement for this film appears on an exterior wall in in the film "From Russia with Love". After helping shoot a man who had just crawled out of a hole in the wall ad (concealed in Ekberg's face), Bond (Sean Connery) remarks, "She should've kept her mouth shut."

*When meeting golfer Arnold Palmer, Palmer relates the fact that his golf clubs were owned by a former friend of Bob's. Bob dumps the golf clubs on the ground and sees they're bent. He then says the line, "Yep...those are Crosby's all right."

*The film was originally intended to be shot entirely on location in but the problems of the led the producers to only have led by .

*According to 's autobiography "When the Snow Melts," was originally contracted by to make two films a year for them, one film and one non-Bond film. Many original suggestions were meant to showcase who turned them all down as he didn't want his career totally in the hands of EON. When asked by executive Donald Zec if they had any ideas for their non-Bond film, who had previously made with Hope said he had an idea for a Bob Hope movie. Broccoli asked Zec if he had any ideas and Zec replied that he had seen a British group called that had sellout crowds and thought about featuring them in a film. Saltzman laughed and asked why he would want to make a film about four young long-haired kids from Liverpool when he had Bob Hope. United Artists made the Beatles film with Walter Shenson and "A Hard Day's Night" was more successful than "Call Me Bwana."

* During a scene of Hope's 's tyres being punctured by darts, a stage hand wearing a white shirt can be seen gesturing behind indoor studio foilage.

* made revisions to the script [p.250 Ceplair, Larry "The Marxist and the Movies: A Biogaraphy of Paul Jarrico" 2007 University Press of Kentucky]