The Eastern Mediterranean University (Turkish: Doğu Akdeniz Üniversitesi), located in Northern Cyprus, was established in 1979 as a higher-education institution of technology for Turkish Cypriots. In 1986, it was converted to a state-trust-run university. The campus is located 10 km from the city of Famagusta. 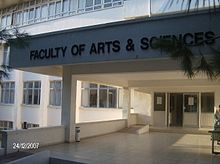 The university has 50 departments (7 Faculties and 3 Schools) offering undergraduate and postgraduate degrees, as well as a research infrastructure. The medium of instruction is entirely in English. However, English Preparatory School is available for students who need to improve their English.[1] The university offers variety of sports and social activities. Academic Programs of EMU are broad and include Physical and Social Sciences with considerable research studies via Research Advisory Board. 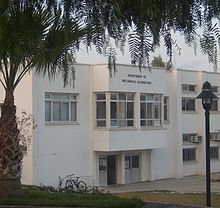 Mechanical Engineering, one of the oldest buildings on campus.

In 1986, following the TRNC Assembly's approval of the Statute establishing the North Cyprus Education Foundation and Eastern Mediterranean University (18/86), the Institute of Higher Technology was converted into a state university assuming the name of Eastern Mediterranean University. During the same year, Faculties of Engineering, Arts and Sciences, Business and Economics and School of Computing and Technology were inaugurated. In 1990, Faculty of Architecture and School of Tourism and Hospitality started offering education. The establishment of Faculty of Law took place in 1996. Faculty of Communication was inaugurated in 1997 and Faculty of Education in 1999. School of Applied Sciences started offering education in 2007 and in 2010, Faculty of Health Sciences and School of Justice were established. With the inauguration of Pharmacy Faculty in 2011, the number of Faculties offering education reached 9 and schools to 4.

The faculty of engineering comprises: Civil, Computer, Electrical & Electronic, Industrial and Mechanical Engineering, has been accredited on October 10 2009 in its undergraduate programs by the ABET, which accredits university programs that are similar to an american university.[2][dead link]

University is a full member of the European University Association[3] and the International Association of Universities. The university established its accreditation for Turkish students under the Council of Higher Education[4][not in citation given] and Turkish Cypriot higher education organisation, but retains its independent structure via its non-profit foundation.[5]

Aerial view of the library in Fall 2007.

The university's library is one the largest on the island, collection reached more than 120,000 books, and offers free access to hundreds of information databases and sources to the users.[citation needed]

Visual and reference materials sections are separate and served in the second floor. The university also collects all postgraduate works in the library.

Large lecture hall in the entrance is utilized for conferences and special events. It is usual to see music recitals there, too. Classical Music listening room has been active since 1998, and its collection increasing.

There are European and American corners[6] in the library. Those corners contain material about history and people of America. European corner mostly presents information about EU and its structure. 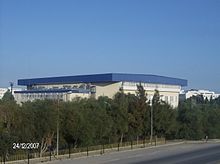 An aerial view of the indoor facility

The expansion of the University during the 90s was not only building and pure educational oriented. It has given an important investment on sports facilities and social activities.

Tennis courts, basketball courts and astro-turf football pitches are all in daily use. Outdoor athletics stadium further provides a full-sized tartan running track, whilst the Lala Mustafa Pasha indoor sports centre with its 3,500 person capacity, serves as the venue for major sporting and cultural events such as (basketball, volleyball, handball, boxing ,wrestling,[7] karate etc.), a small stadium (which is the home of American Football EMUCROWS), tennis fields. The students can join these activities and train with professional instructors. The university gives scholarships to successful athletes.

University owns a radio station on 106.5 FM called Radio EMU broadcasting to whole island.[8] It is run by students of the Communications department.

A North Cypriot Newspaper, Cyprus Today, published two articles in 2008, featuring allegations of mobbing and bullying at the school, particularly against foreign faculty.

In the first article, the newspaper quoted the allegations of an ex-faculty member who claimed that he was forced to resign after he was harassed, professionally sabotaged, and the victim of false allegations (of which he was later exonerated after appealing to international organizations). The article also provided the reaction of the school: School administration denied the allegations and stated that the allegations were 'Utterly false and that no such thing has occurred and nothing can be substantiated'. A spokesman for the Worker's union said they were not aware of that particular faculty member's situation, but had experienced similar problems concerning other faculty members.[9]

In the second article, the newspaper reported about the penalizing of a British Faculty member, who was removed from the position of department chair for undisclosed reasons. The faculty member declined to comment, saying: "I don't want to comment because I feel that I have to work here for some time and don't want to cause any problems. I don't want anything I have to say to be misconstued by anyone. I just want to carry on with my work" University administration also declined to comment, but the faculty member replacing the department chair said: "There are different versions: One side is that he is a victim. The other version is that the circumstances could have led to expulsion."[10]

On 9 September 2009, Eastern Mediterranean University's rector, Prof. Dr. Ufuk Taneri was dismissed by the University Senate. The university's board of trusties has unanimously ratified the decision on 11 September.[11] No reason was ever given publicly for the dismissal, as the rector was replaced by Prof. Dr. Abdullah Y. Öztoprak. The rector's dismissal was finally declared illegal by the Supreme Administrative Court on 14 July 2010.[12]