Forsterite is associated with igneous and metamorphic rocks and has also been found in meteorites. In 2005 it was also found in cometary dust returned by the Stardust probe.[5] In 2011 it was observed as tiny crystals in the dusty clouds of gas around a forming star. [6]

Two polymorphs of forsterite are known: wadsleyite (also orthorhombic) and ringwoodite (isometric). Both are mainly known from meteorites.

Peridot is the gemstone variety of forsterite olivine.

Forsterite reacts with quartz to form the orthopyroxene mineral enstatite in the following reaction: 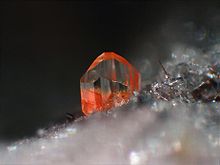 Orange forsterite with a portion of tephroite

Pure forsterite is composed of magnesium, oxygen and silicon. The chemical formula is Mg2SiO4. Forsterite, fayalite (Fe2SiO4) and tephroite (Mn2SiO4) are the end-members of the olivine solid solution series; other elements such as Mn, Ni, and Ca substitute for Fe and Mg in olivine, but only in minor proportions in natural occurrences. Other minerals such as monticellite (CaMgSiO4), an uncommon calcium-rich mineral, share the olivine structure, but solid solution between olivine and these other minerals is limited. Monticellite is found in contact metamorphosed dolomites.[1]

Forsterite-rich olivine is the most abundant mineral in the mantle above a depth of about 400 km; pyroxenes are also important minerals in this upper part of the mantle.[7] Although pure forsterite does not occur in igneous rocks, dunite often contains olivine with forsterite contents at least as Mg-rich as Fo92 (92 % forsterite – 8 % fayalite); common peridotite contains olivine typically at least as Mg-rich as Fo88.[8] Forsterite-rich olivine is a common crystallization product of mantle-derived magma. Olivine in mafic and ultramafic rocks typically is rich in the forsterite end-member.

Forsterite is mainly composed of the anion SiO44- and the cation Mg2+ in a molar ratio 1:2.[10] Silicon is the central atom in the SiO44- anion. Each oxygen atom is bonded to the silicon by a single covalent bond. The four oxygen atoms have a partial negative charge because of the covalent bond with silicon. Therefore, oxygen atoms need to stay far from each other in order to reduce the repulsive force between them. The best geometry to reduce the repulsion is a tetrahedral shape. The cations occupy two different octahedral sites which are M1 and M2 and form ionic bonds with the silicate anions. M1 and M2 are slightly different. M2 site is larger and more regular than M1 as shown in Fig. 1. The packing in forsterite structure is dense. The space group of this structure is Pbnm and the point group is 2/m 2/m 2/m which is an orthorhombic crystal structure. 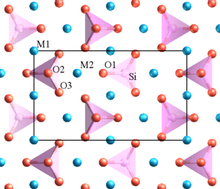 Fig. 1: The atomic scale structure of forsterite looking along the a axis. Oxygen is shown in red, silicon in pink, and Mg in blue. A projection of the unit cell is shown by the black rectangle.

This structure of forsterite can form a complete solid solution by replacing the magnesium with iron.[11] Iron can form two different cations which are Fe2+ and Fe3+. The iron(II) ion has the same charge as magnesium ion and it has a very similar ionic radius to magnesium. Consequently, Fe2+ can replace the magnesium ion in the olivine structure.

One of the important factors that can increase the portion of forsterite in the olivine solid solution is the ratio of iron(II) ions to iron(III) ions in the magma.[12] As the iron(II) ions oxidize and become iron(III) ions, iron(III) ions cannot form olivine because of their 3+ charge. The occurrence of forsterite due to the oxidation of iron was observed in the Stromboli volcano in Italy. As the volcano fractured, gases and volatiles escaped from the magma chamber. The crystallization temperature of the magma increased as the gases escaped. Because iron(II) ions were oxidized in the Stromboli magma, little iron(II) was available to form Fe-rich olivine (fayalite). Hence, the crystallizing olivine was Mg-rich, and igneous rocks rich in forsterite were formed.

Forsterite was first described in 1824 for an occurrence at Mte. Somma, Vesuvius, Italy. It was named by Armand Lévy in 1824 for the English naturalist and mineral collector Jacob Forster.[13][14]