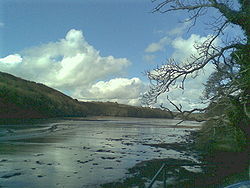 The River Fal at Devoran

The River Fal (Cornish: Dowr Fala) flows through Cornwall, United Kingdom, rising on the Goss Moor (between St. Columb and St Austell) and reaching the English Channel at Falmouth. On or near the banks of the Fal are the castles of Pendennis and St Mawes as well as Trelissick Garden. The River Fal separates the Roseland peninsula from the rest of Cornwall. Like most of its kind on the south coast of Cornwall and Devon, the Fal estuary is a classic ria, or drowned river valley.

The origin and meaning of the name of the river are unknown. The earliest occurrences of the name are in documents of 969 and 1049 AD. Falmouth, a town which was known by another name until the 17th century, is named after the River Fal.[1]

The word Fal in Cornish may refer to a prince, or on the other hand to a spade or shovel.[2]

The river mouth and Falmouth harbour served as an anchorage in the immediate years after the Second World War for scores of laid-up Royal Navy vessels (including battleships, carriers, and cruisers) awaiting sale for scrap. Its size and depth of water made it ideal for this use.[citation needed]

The catchment of the Fal is predominantly Devonian slates, shales and grits, with Granite in the upper reaches. Land use is mainly agricultural with some woodland.[3]

The river is crossed by the historic and scenic King Harry Ferry, a vehicular chain ferry that links the villages of Feock and Philleigh approximately equidistant between Truro and Falmouth.

The River Fal suffered a severe, high profile pollution accident in February 1992, when a nearby tin mine was flooded. The river turned red and an extensive cleaning-up operation was needed to decontaminate the water. [1]

Five Sites of Special Scientific Interest (SSSI) have been designated along the River Fal. The river rises on Goss Moor which is both a National Nature Reserve and part of a SSSI. The wetland habitats and western dry heath communites were formed, since the Bronze Age, by the mining of the alluvial tin deposits.[5] South Terras Mine SSSI is also a Geological Conservation Review (GCR) site of national importance and was once a commercial uranium mine. The Crowhill Valley SSSI between Grampound and St Stephen is an ancient woodland dominated by sessile oak on the slopes, and of willow and alder carr on the floodplain which has a rich ground flora. The species list includes many ancient woodland indicators including lichens such as Parmelia endochlora.[6] The Upper Fal Estuary and Woods SSSI is mostly within the tidal area of the river between Tregony and Turnaware Point and includes mudflats, salt marsh and ancient woodland. The mudflats support nationally important numbers of Black-tailed Godwit as well as large populations of wintering waders and wildfowl such as Curlew and Golden Plover. A series of transition zones occur from the salt marsh to scrub, where young trees attempt to grow despite the threat of the highest tides, to ancient woodland on the higher slopes. These zones and the estuary itself are important for otter.[7] The lowest part of the Fal along with the Helford River is designated as the Fal and Helford Special Area of Conservation under the Habitats Directive for the shallow bays and inlets, sandbanks and mudflats, and for its salt marshes. Part of the area is also designated as a SSSI (Lower Fal & Helford Intertidal) for the relatively undisturbed transitions from tidal mud through saltmarsh and scrub to woodland.[8][9]

The River Fal is accessible for kayaking.[10]

Towns and villages on the Fal