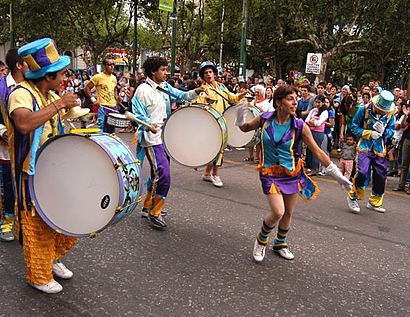 Murga is a form of popular musical theatre performed in Uruguay and in Argentina during the Carnival season. Murga groups operate in Montevideo and at the Buenos Aires Carnival, though to a lesser extent than in Montevideo; the Argentine murga is more centred on dancing and less on vocals than the Uruguayan one. Uruguayan murga has a counterpart in Cadiz, Spain from which it is derived, the chirigota, but over time the two have diverged into distinct forms.

The Murga is performed by a group of a maximum of 17 people, usually men. In the months prior to Carnival, which takes place from late January to early March in Uruguay, each group will prepare a musical play consisting of a suite of songs and recitative (heightened speech) lasting around 45 minutes. This suite will be performed on popular stages in the various neighbourhoods, known as tablados, throughout the Carnival period. Groups also vie against one another in a prestigious official competition.

Lyrical content is based on a particular theme, chosen by the group, which serves to provide commentary on events in Uruguay or elsewhere over the preceding year. Consequently, murga lends itself well to being used as a form of popular resistance. For example, during the dictatorship in Uruguay in the 1970s, groups like Araca La Cana became known for their left-wing tendencies, subversive commentary and oppositional stance. 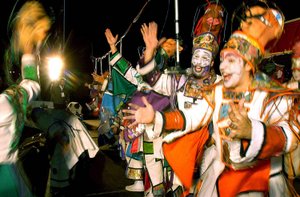 A murga group performing on the occasion of the inauguration of Uruguayan president Tabaré Vázquez, Montevideo, March 2005

A traditional murga group is composed of a chorus and three percussionists and this is the type of murga performed on stages at Carnival. The singers perform in polyphony using up to five vocal parts. Vocal production tends to be nasal and loud with little variation in volume. The percussion instruments, derived from the European military band, are bombo (a shallow bass drum worn at the waist and played horizontally), redoblante (snare drum) and platillos (clash cymbals). The two most important pieces of the performance are the opening song (saludo) and the exit song (retirada or despedida). These get played on the radio during the Carnival period and some of them, such as the Saludo Araca La Cana 1937, are cherished by Uruguayans as cultural icons.

Murguistas dress in elaborate, colourful, jester-like costumes. Staging is sparse with minimal use of props. The singers tend to be foregrounded with the percussionists at the back or off to the side of the stage.

The musical style or rhythmic structures of the murga is sometimes incorporated into Uruguayan popular music. Examples of artists who have included murga in their arrangements are Jaime Roos, Rubén Rada, Máximo Diego Pujol Washington Canario Luna, and Alejandro Balbis. It has also been incorporated by some Argentine artists, such as Bersuit Vergarabat, Los Auténticos Decadentes, Ariel Prat and Los Fabulosos Cadillacs.