Sports on the Gold Coast, Queensland

Sports on the Gold Coast, Queensland 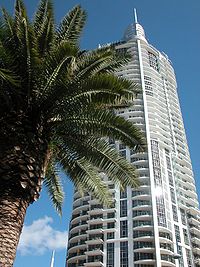 The Gold Coast Titans became the first Gold Coast team in a national competition for almost a decade when it was announced on 27 May 2005 that they would join the 2007 season of the National Rugby League.

Football Federation Australia has announced that Gold Coast United will join the A-League for the 2009–10 season. Gold Coast United FC will be funded by local billionaire Clive Palmer. The new club is not connected to the previous Gold Coast Galaxy bid.

The Gold Coast Breakers play in the Queensland Premier Rugby competition, the fourth level of rugby union in Australia. The Gold Coast also hosted a team in the ill-fated Australian Rugby Championship for one season before the team and competition folded.

Beginning in 2011–12, the Australian leg of the IRB Sevens World Series will move from Adelaide to the Gold Coast. The event, initially called the International Rugby Sevens Gold Coast before being rebranded as simply the Gold Coast Sevens, will be held in late November at Skilled Park.[2][3]

The Gold Coast was the home of the Brisbane Bears who moved to Brisbane in 1993, then merged with Fitzroy to become the Brisbane Lions. Currently the Gold Coast is home to three clubs (The Southport Sharks, the Broadbeach Cats and the Labrador Tigers) in the amateur Queensland AFL State League, the state's highest level ARF of competition.

In 2008, the AFL announced plans for a 17th team to enter the competition. After a bidding process, the AFL granted the licence for the 17th franchise in March 2009 to a group initially known as GC17. The franchise debuted in the TAC Cup in 2009, then played in the VFL in 2010 before graduating to the AFL in 2011, where they are now known as the Gold Coast Suns. [4]

There are many recreational activities situated on the Gold Coast ranging from Surfing to fishing and Boating to Golf.

The Gold Coast is a popular place for surfing. World class breaks including TOS, Sandpumping Jetty, Burleigh, Currumbin Alley, Greenmount, Kirra, Snapper Rocks and Duranbah (just over border into NSW). There are also many other surfing locations along the open beaches. The Roxy Pro and Quiksilver Pro are held on the Gold Coast and kickstart the World Championship Tour calendar each year.

Fishing is a popular activity on the Gold Coast. Popular fishing spots include the Sandpumping Jetty on the Spit, Offshore reefs at Palm Beach, The Narrowneck Reef, the Gold Coast Broadwater, Jumpinpin, Coomera, Logan and Albert Rivers, Currumbin and Tallebudgera Creeks and fresh water environments at Robina Lakes and Hinze Dam.

Boating is a popular activity on the Gold Coast. There are waterskiing areas at upper coomera, santa barbara, along the western Broadwater, Tipplers, Currigee, Isle of Capri, Carrara and Tallebudgera Creek. There is an olympic standard sailing basin in the Broadwater and marks offshore for various types of vessel events. Sailing is popular. The Gold Coast has a growing mega yacht industry and boat manufacturing industry. Fishing vessels include tinnies up to three storey fly bridge versions. There are 35 public boatramps spread throughout the City from Waterford to Currumbin and there are 105,000 registered vessels {2001} within two hours drive of a Gold Coast Boatramp.

Magic Millions a thoroughbred auction sales and racing event is the largest to be held on the Gold Coast. This annual event held in January each year attracts buyers and enthusiasts from around the world, with one year a staggering $100 million dollars turnover in yearling sales.

The Gold Coast is host to a range first class sporting venues, from outdoor stadiums like the just-completed Skilled Park to the indoor Gold Coast Convention Centre and the Olympic class Runaway Bay Sports Super Centre. Other facilities include Carrara Stadium, the Carrara Indoor Sport Centre and the Nerang Velodrome.

Gold Coast's biggest sporting event is not held at a permanent facility, but a temporary facility that does not exist for 50 weeks of the year. Laid out on streets of Surfers Paradise, with the Gold Coast Highway as the front straight, tens of thousands of spectators attend the Gold Coast Indy 300 each October to see the V8 Supercar Championship Series and headlining for the first time this year the IndyCar Series, replacing the now defunct Champ Car World Series. It is the third of three racing circuits to have existed on the Gold Coast. Surfers Paradise International Raceway existed just to the west of Carrara Stadium until it was closed in the mid-80s and laid derelict for several decades until finally built over. Another street circuit existed for on weekend in 1954 further north in Southport.

Robina Stadium, known commercially as Skilled Park, is the premier stadium on the Gold Coast and seats 27,000 people undercover. Completed in February 2008 it is located in the suburb of Robina and sits adjacent to Robina Train Station. It was built specifically for the Gold Coast Titans' re-entry to the National Rugby League.

Carrara Stadium is the city's largest oval stadium, it has an official capacity of 18,000 (most of which are not undercover or seated).[5] The stadium has however on numerous occasions hosted attendances in excess of this official capacity. It was previously the home rugby league on the Gold Coast and Brisbane Bears(merged and relocated).

The Carrara Indoor Sport Centre[5] neighbours Carrara Stadium and has a seated capacity of 3,000. It was previously the home of the basketball team, the Gold Coast Rollers.

Situated in Broadbeach, the Gold Coast Convention and Exhibition Centre was opened on 29 June 2004 at a cost of $127 million. It is home to the Gold Coast Blaze in the National Basketball League and will reportedly be able to seat over 5000 spectators.[6]

This facility[7] is located at the northern end of the Gold Coast, in the suburb of Runaway Bay, has been earmarked as a world class training facility.[citation needed] The centre includes nine purpose built villas which provide accommodation for touring groups or sporting teams, FINA approved 50 metre outdoor swimming pool, an IAAF certified 10 lane 400 metre athletic track with 3000 seater capacity stadium, a 600 m2 gymnasium and health spa. It is being used by the Gold Coast Titans until their own HQ and training facilities are built in Robina.

The Nerang Velodrome (including the Nerang International Criterium Circuit Velodrome) is a 356 m asphalt track with lights for night time use. There is a permanent covered grandstand for 240 people and temporary grandstands for a further 150 people. The Criterium Circuits include three hot-mix asphalt circuits. There is a flat 600 m circuit, and 900 m and 1500 m circuits which both include a 200 m hill.

It hosted the pre-2000 Olympic Games training for Great Britain Cycling (Road) and Triathlon Teams, and the Sweden Cycling (track) Team. The nearby Nerang State Forest, with its hilly terrain and well-maintained trails is a favourite recreational area for mountain bike riders.