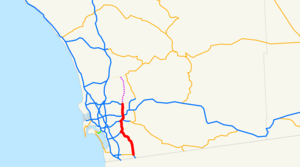 The southern portion of Route 125 from Route 905 to Route 54 near Chula Vista is a called the South Bay Expressway. It is California's first road built as a public/private partnership. The toll road is being funded by the private company and the following public agencies: the , , (SANDAG), and the City of Chula Vista.

The toll road's name is quite unusual, as it is built to freeway standards and therefore should be labeled a freeway under both California and federal law. See and for more information on the difference between the two.

Route 125 was originally planned to continue north through East Miramar to Poway to connect with State Route 56 and but Poway successfully blocked that by insisting Caltrans upgrade State Route 67 instead, leaving the northern terminus at State Route 52. There still are proposals to connect it to Scripps Poway Parkway, or to take it all the way up to Riverside parallel to Interstate 15, creating a third full north/south freeway for San Diego. It is currently unlikely that will ever happen though.Fact|date=March 2008

In the early 1990s, only the section south of Interstate 8 and north of State Route 94 was completed; confusingly, it was signed as State Route 94, even though it met with both westbound and eastbound Route 94 at its southern terminus. The Route 125 signs later replaced the Route 94 signs, although at the Interstate 8 a "TO" referring to Route 94 is carried on the signs for Route 125 South.

The fourth section, the South Bay Expressway , opened on , [http://www.southbayexpressway.com/pdf/newsroom/pr_sbx_opening_071116.pdf] extending Route 125 southward from State Route 54 to Otay Mesa. It was designed as a toll road due to the lack of available funds from a 1/2 cent sales tax, which was set to expire in 2008. In 2004, the voters of San Diego County voted to extend the 1/2 cent sales tax to 2028 [http://www.cfte.org/state/states.asp?StateID=5] , this making more funds available to fund this project, and other projects in this region, calling into question the purpose of the toll road designation of this roadway. The toll road is equipped with both cash and electronic toll collection equipment, the electronic equipment being the RFID ststem used elsewhere in California.

:"Note: Except where prefixed with a letter, s were measured in 1964, based on the alignment as it existed at that time, and do not necessarily reflect current mileage."The entire route is in San Diego County.